Theater Review: Murder on the Orient Express at Everyman 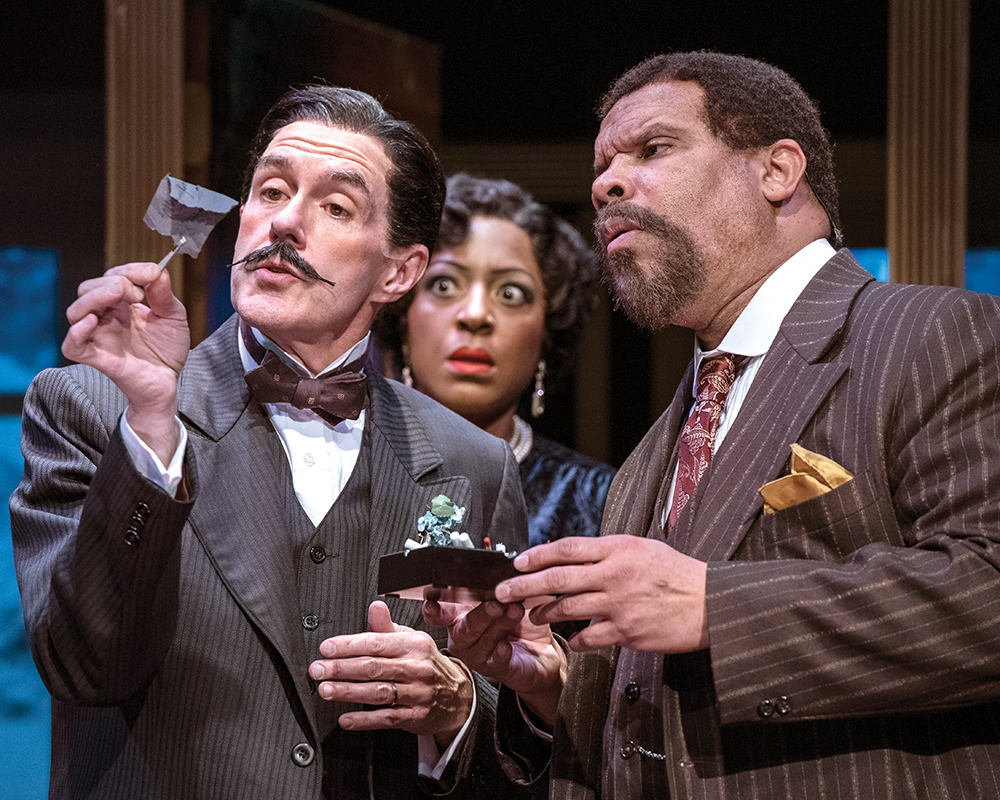 Part of the fun of a sprightly whodunit, certainly those by author Agatha Christie, are the pithy character introductions that drop intriguing clues to any ensuing mystery. Ken Ludwig’s stage adaptation of Christie’s Murder on the Orient Express, running through the holidays at Everyman Theatre, commences with an extended sequence of “Hello, this is So-and-So” intros that do not accordingly bait the hook for this stilted rendering of one of the great mystery writer’s most transporting tales.

The large cast of characters, condensed from the original novel, are thoroughly sketched in the production, staged by Everyman Artistic Director Vincent M. Lancisi. Bold performances, wigs and makeup, and David Burdick’s sumptuous period costuming bring vivid color to each passenger onboard, from the comically overbearing Mrs. Hubbard (Deborah Hazlett), to world-famous Belgian detective Hercule Poirot (Bruce Randolph Nelson), who addresses the audience directly to introduce what he confidently describes as a tale of romance and tragedy. But Poirot exaggerates.

Romance and tragedy are barely felt, as the script and direction ply broad and bright-eyed comedy, while laboring over the logistics, though not the spatial logic, surrounding the murder plot. The shattering loss that fuels that plot — inspired by the real-life tragedy of the Lindbergh kidnapping and murder — seems an afterthought, although it’s presented as prologue in projections across Daniel Ettinger’s quite handsome set. The poshly appointed private train compartments track towards the audience to allow closer viewing, but not close enough to register the pulse of heated deception and murderous vengeance, or of any romance.

Dressed for the game, and extensively introduced, the players in the mystery all just hang there, waiting for the thing to happen that the title promises will eventually happen. At times the actors literally are posed in crowded tableaux awaiting cues, or for scenery to roll into place. The stiff scene changes add to an atmosphere of artificiality that doesn’t get much help from dialogue that reduces Agatha Christie to flimsy mother-in-law jokes. Somewhat miscast as a detective often referred to as “that funny, little man,” or once as a “campy little ninny,” the not at all little Nelson offers a credible Poirot. But the funny, little Belgian alone can’t carry this Orient Express through the drifts to the mystery’s final station.

André Hereford covers arts and entertainment for Metro Weekly. He can be reached at ahereford@metroweekly.com. Follow him on Twitter at @here4andre.
← Previous Story Theater Review: “The Woman in Black” at The Shakespeare
Next Story → Theater Review: ‘She the People’ at Woolly Mammoth