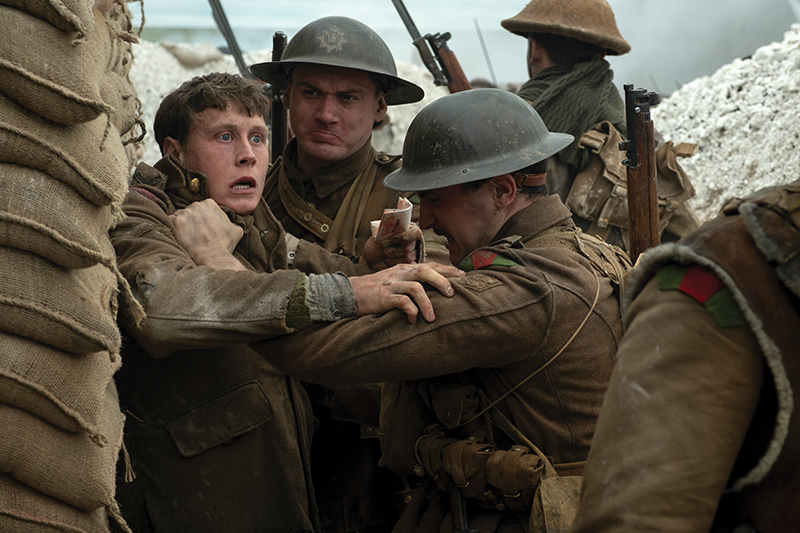 Virtuosity means making the hard parts look easy, and, however difficult it might have been for director Sam Mendes and the cast and crew of 1917 (★★★★★) to create the illusion that this riveting World War I story was captured in a single, continuous take, the film plays out with a seamless fluidity that belies their tremendous effort. Following two intrepid British Army soldiers — Lance Corporal Blake (Dean-Charles Chapman) and Lance Corporal Schofield (George MacKay) — dispatched on a virtual suicide mission across enemy lines, the movie marches, runs, and battles forward relentlessly into danger.

Legendary cinematographer Roger Deakins (Blade Runner 2049) sends the camera hurtling alongside Blake and Schofield through trenches and sub-trenches, plunging into a rushing river, and across cratered fields, burned and barren. Usually the view is limited to what the men on the ground can see and hear for themselves, although occasionally the camera rises above the foot soldiers to fully survey their peril on the battlefield. Schofield, a decorated soldier who appears to have seen the worst of war, might want to turn back, but Blake remains determined to carry out their orders, assigned to them by General Erinmore (Colin Firth) — reach the 2nd Division and prevent the unit’s commander from leading his men, including Blake’s brother, into a deadly ambush.

To complete their mission, they’ll need to cross No Man’s Land, the razor wire-strewn void that lies between the Allies and the German front line. They’ll need to pass under the dark of night through the devastated remains of the formerly occupied French village Écouste-Saint-Mein. And nearly every step of the way they’ll be reminded that certain death awaits thousands of soldiers fighting the Great War, and any man should count himself lucky to come out alive.

As with many fine war films, 1917 delivers a profound anti-war message in its careful depiction of the hell that is combat. Harnessing its two likable leads to a straightforward quest narrative, the movie leans on vivid production design to evoke a literal fiery hellscape of rats and mud and rotting corpses, and charred crevices that might once have been farmland but now serve as mass graves. Considering the risk of such apocalyptic circumstances, the film suggests, beware of any leader who too lightly sends young patriots to die. The script, by Mendes and Krysty Wilson-Cairns, brings that message to the fore in the form of a warning delivered by an upstanding captain who crosses the soldiers’ path. This Captain Smith is portrayed, in a brief, impactful turn, by Mark Strong, and he’s one of several seasoned Army officers played by famous faces, from Fleabag‘s Andrew Scott to Benedict Cumberbatch. 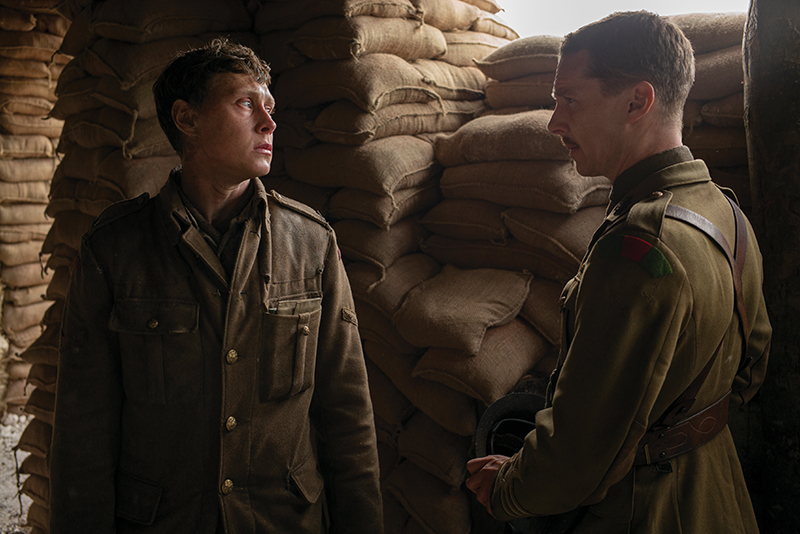 However, it’s up to young guns MacKay, so great opposite Viggo Mortensen in Captain Fantastic, and Chapman, perhaps best known as Tommen Baratheon on Game of Thrones, to keep these characters — and the film — on the move. Beyond enacting Blake and Schofield’s grueling physical campaign, progressing virtually in real time, Chapman’s and MacKay’s performances provide the emotion that will keep audiences teetering on the edge of suspense. Blake’s heedless resolve to reach the 2nd and save his brother complements Schofield’s extraordinary will to survive. They might, alternately, be motivated by duty or decency, impulse or strategy, yet, always behind their eyes, you can sense the fear. And you can see how they set terror aside, both for each other and for the lives of the 1,600 men of the 2nd. They’re a First World War Frodo and Sam, armed with a map, flashlights, their rifles, and a couple of grenades.

They also have the guile and courage to slip through their share of traps, and engineer last-minute escapes worthy of Indiana Jones. And they’re lifted up throughout by composer Thomas Newman’s elegiac score. At times, the pockmarked fields of battle and half-destroyed buildings — shot on location in England and Scotland, and at Shepperton Studios — seem to vanish from view, and there’s nothing but bombs exploding in midair, the billowing music, and the fear on their faces as they run for their lives. This is art to give pause to any viewer with a conscience, with a finger on the trigger, or the power to choose when and where wars get fought.

1917 is rated R, and opens in theaters everywhere on Friday, January 10. Visit www.fandango.com.

André Hereford covers arts and entertainment for Metro Weekly. He can be reached at ahereford@metroweekly.com. Follow him on Twitter at @here4andre.
← Previous Story The Best and Worst Films of 2019