Exclusive Photos: The cast of Round House’s breathtaking ‘Spring Awakening’

The cast of Spring Awakening, photographed on the set by Todd Franson for Metro Weekly.
.

“Steven Sater and I both had a vision for how this classic play from the 19th century might be adapted as a contemporary musical,” says the Grammy-winning pop star Duncan Sheik. With Spring Awakening, the duo more than succeeded. The show, featuring music by Sheik and lyrics and book by Sater, based on Frank Wedekind’s original German play, hauled in eight Tony Awards in 2007. It went on to become the toast of several theater seasons, with its multi-year original run on Broadway as well as successive national tours. Thirteen years later, the musical remains a powerful, stirring, provocative work.

Sheik points to Spring Awakening‘s overriding theme as the chief reason for its continued popularity and cultural relevance. “It’s about how parents and clergy and teachers can really mess up the kids that are in their charge, by not communicating with them, or not communicating with them honestly,” he says. “Specifically about issues of sex, but that can go into any other area that you don’t want to speak of… And giving them a lot of canned, bourgeois notions about religion and values, and stuff that was really hypocrisy, and how that can damage children.

“It was certainly like that in the 19th century, and it continues to be like that today. You only have to look at the White House to see that to be the case.”

A few miles north of D.C., in Bethesda, the recently renovated Round House Theatre is introducing a new generation of actors and theatergoers to Sheik’s musical, in a dazzling new production overseen by Alan Paul. The Associate Artistic Director at Shakespeare Theatre Company, Paul has become one of Washington’s go-to musical theater directors. He takes a notably fresh approach for his Round House debut, starting with a 13-person cast comprised mostly of recent college grads in their early 20s. The two main exceptions are acclaimed veteran actors Bobby Smith and Tanya Beckman, who play all the Adult Men and Adult Women characters, respectively.

“You can’t make these characters likeable, really,” Smith says. “So much of the conflict in the show [stems from] everything the adults do incorrectly.”

Paul calls the production “a showcase for a lot of really talented young performers in the area. The musical asks them to do a lot of big things.” He singles out for praise 23-year-old Carson Collins, who plays Georg, the boy infatuated with his female teacher: “He’s a breakout vocal star from the ensemble. He’s got incredible solos.” Meanwhile, James Mernin, a 22-year-old New York native, portrays Ernst, a boy struggling with his sexual identity. Ultimately, he can’t resist the charms and kisses of Hänschen, portrayed by Christian Montgomery — one of the cast’s oldest actors, at age 27, and also one of its best-known.

“It’s really cool to show that, yes, gay people have always been here too, even in 1891 in Germany,” Montgomery says, who later suggests that Hänschen is more likely bi- or pansexual. “He’s attracted to basically everything — he falls on the spectrum. He is just very confident, and he knows what he wants and he’s not afraid to go for it.” 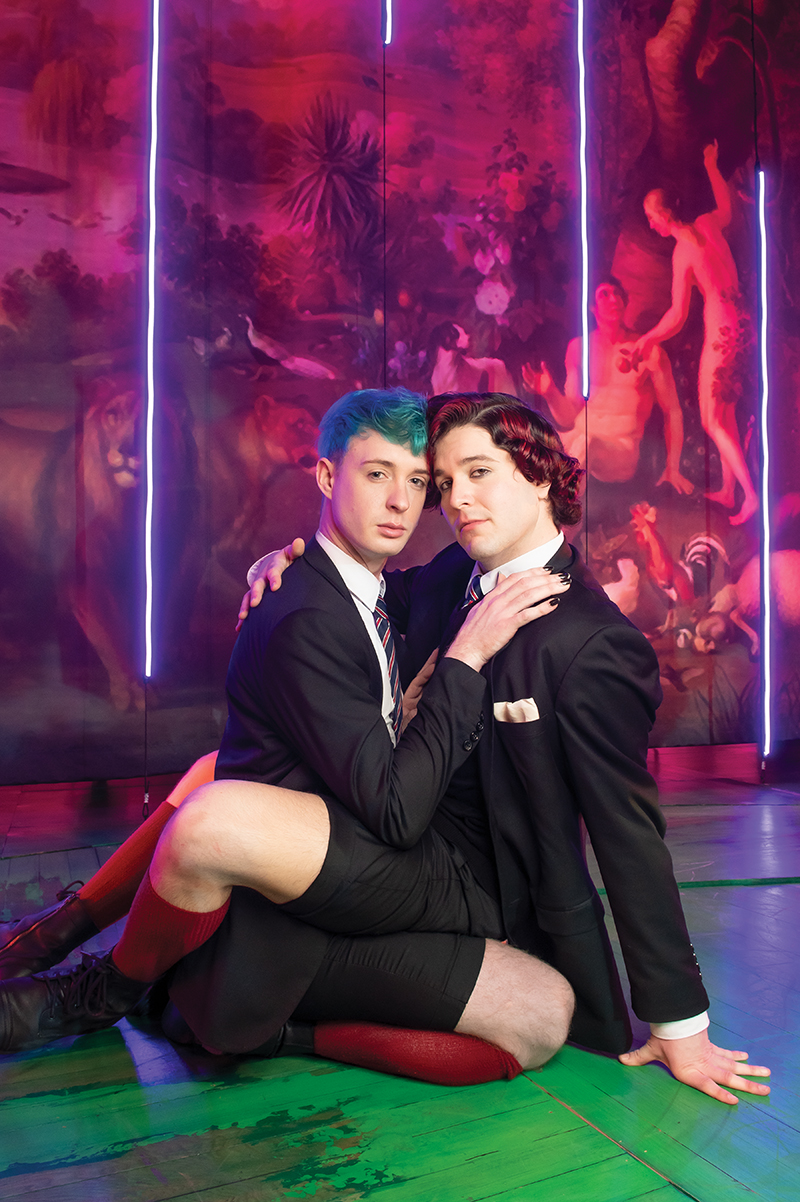 In the show, Hänschen and Ernst kiss a total of five times, something the two gay actors prepared for and rehearsed repeatedly until their kissing was perfect — perfectly scripted, that is, and performed the same way every time, like any other piece of choreography. The two decided in advance how long each kiss would last by counting. “The last kiss we have is a four count,” Mernin says. “It’s very by-the-number. The counts help us stay in time with the music so that when we finish the scene, we’re not really ahead or behind the pickup for the next verse of the song.”

Montgomery and Mernin were guided through their kissing scenes by Lorraine Ressegger-Slone, the show’s intimacy consultant. With her help, Montgomery says, the most intimate moments become “very technical, which is great when you’re working with somebody and you have to do the same thing every day. You want to make sure you know exactly what you’re doing, and that it’s work, like anything else.”

Intimacy direction, says Ressegger-Slone, is a new and burgeoning field, and an offshoot of choreography — fight choreography in particular. “Just as you would choreograph a dance or a fight for the stage,” she says, “you want to choreograph those intimate moments as well.” This is particularly relevant for any scene dealing with sexual situations or nudity. Her work involves “being an advocate and a voice for actors, and a safe person, helping them establish healthy boundaries, and to articulate those boundaries.”

Paul McGill, a New York-based choreographer, is another new artist brought on specifically for the production. “The dances in this are unusual,” says director Paul. “Sometimes they’re just psychological gestures. I think [McGill’s] done an amazing job capturing the internal world of the kids in this show. I don’t think people have seen movement that looks like this before.”

McGill says that Bill T. Jones’ choreography from the show’s original Broadway production “is definitely in the bones of the material. I tried my best not to put any stomps in the ‘Bitch of Living,’ but it’s hard to steer away from what the music is calling for.” 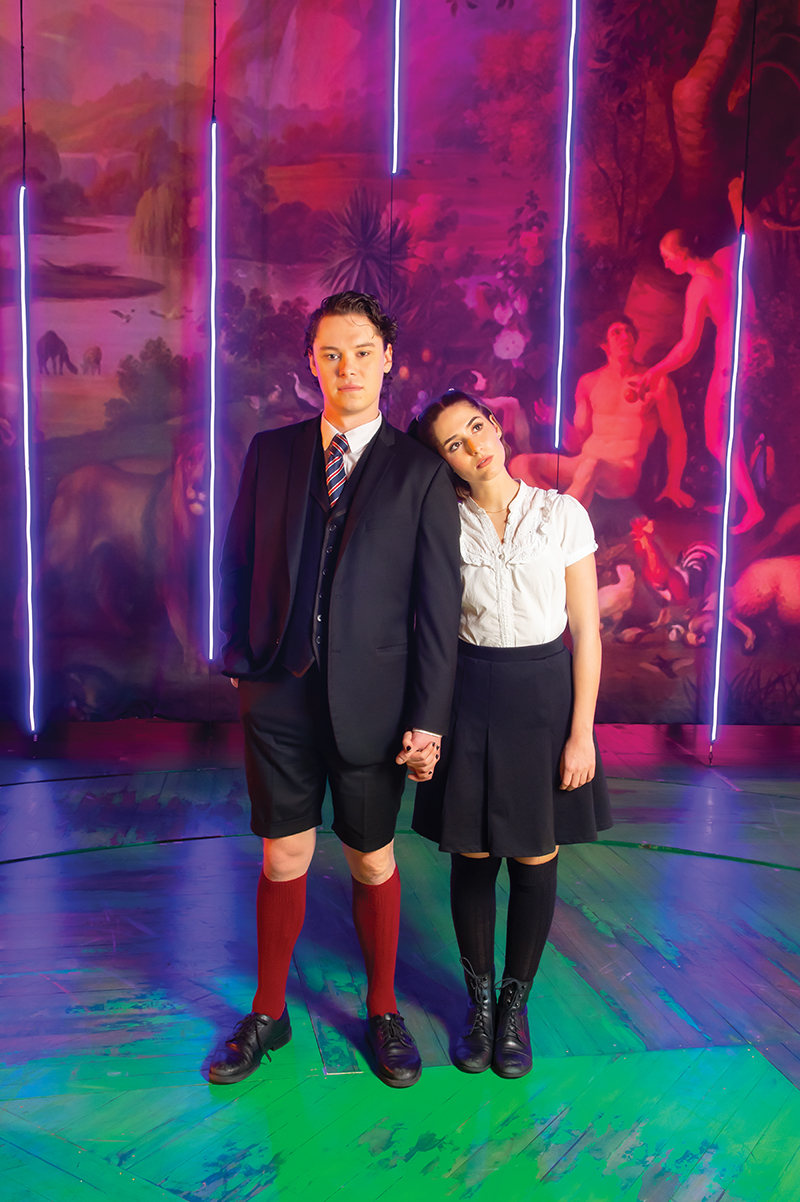 A big fan of McGill’s work with the show is actor James Mernin, who actually started his career as a dancer in New York City. Seeing McGill’s efforts has reignited his own passion for choreography.

“Paul McGill is a genius,” he says. “He knows how to blend emotions, staging and stance together so flawlessly that audiences don’t know they’re witnessing a huge dance number until it’s after the show. The first thing that a lot of my friends who have seen the show said was, ‘That choreography was breathtaking and flawless, and it worked so seamlessly into the show that it didn’t seem like, ‘Okay, time for a big dance number now.'”

Other cast members have been gratified to see that Spring Awakening seems to be catching on among today’s adolescents — or at least among Maryland high schoolers. “Seeing teenagers…coming to the show, and getting to talk to them afterwards has been really rewarding,” says 24-year-old Chani Wereley. “To know that our work playing these young people on the stage is resonating with people who are in that time of their life is really cool.”

After a recent performance Wereley met a girl who identified with her character Martha, whose father abuses her, and the song she sings, “The Dark I Know Well.”

“She came up to me and told me that she was a survivor, and that song was everything she can’t say out loud, and just started crying,” Wereley says. “I thought, ‘Oh my God, this is why I do theater.’ It was so rewarding, in the worst way.” 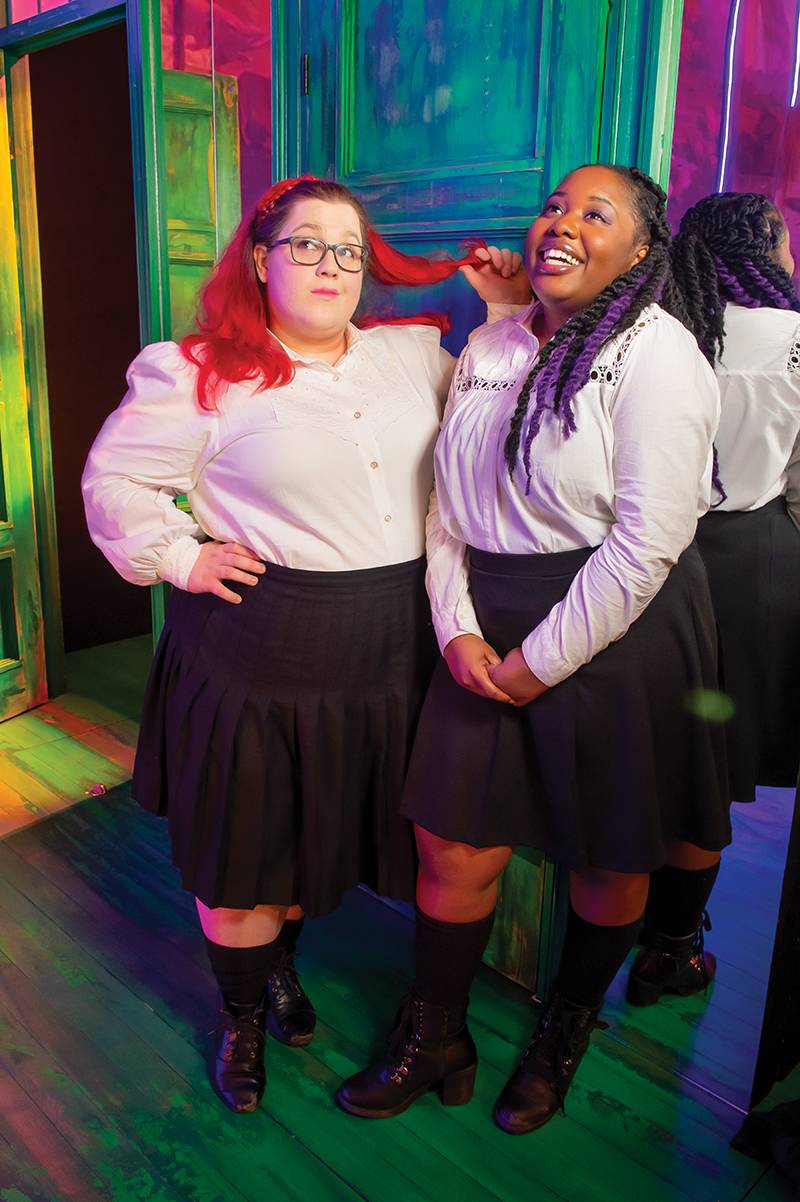 “Musical theater is an interesting medium, because a lot of these shows, they take many years of development,” says Sheik, now 50. It can take many more years for each show to finally see the light of the stage and enter the public domain. “You kind of have to have a lot of irons in the fire in order to make it work. I’ve got lots of — possibly too many — shows in various stages of development.”

Over the past year alone, a new crop of musicals composed by Sheik have briefly lit up Off-Broadway, including Alice by Heart, his musical twist on Lewis Carroll’s classic Wonderland fantasy created with his Spring Awakening collaborator Sater, and The Secret Life of Bees, adapted from the novel by Sue Monk Kidd and featuring a book by Lynn Nottage and lyrics by Susan Birkenhead. Meanwhile, next month sees the Off-Broadway premiere of Whisper House, a haunting new work featuring music by Sheik and lyrics co-written by the musical’s book writer Kyle Jarrow.

And just last week, Sheik launched another show Off-Broadway — Bob & Carol & Ted & Alice, a musical take on the hit 1969 film about sexual exploration, boasting a book by Jonathan Marc Sherman and lyrics co-written with Amanda Green. Paul Mazursky’s debut feature film is “sort of a cult favorite,” Sheik says, heralded for its frank and unconventional look into issues of sexual experimentation and open relationships among a group of young, straight, married professionals.

The adaptation is half a world away and nearly a century removed from the setting of Spring Awakening, but Sheik does see a throughline. “It’s similar territory, because it’s about a group of people trying to navigate new norms and values about sexuality — but from the perspective of adults in the late ’60s, in bourgeois L.A., as opposed to teenagers in the 1890s in bourgeois Germany. 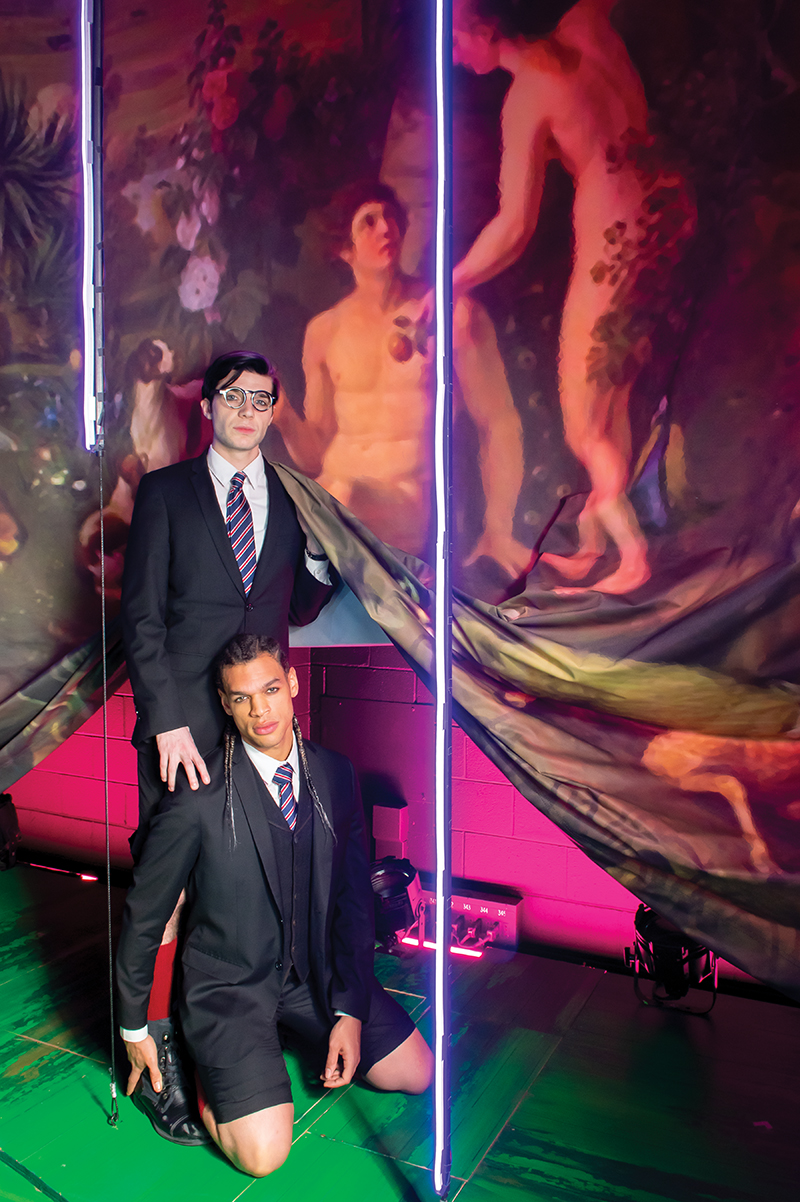 “Spring Awakening is this sort of perennial, which is really lovely,” he continues. “There continue to be productions all over the country, and certainly all over the world. It’s really gratifying, and it’s an amazing thing.”

Sheik generally doesn’t get involved or see the many regional productions of the show — no matter how innovative or acclaimed they may be, like the one currently on stage at Round House. “I just opened a show here in New York,” says the singer-songwriter, currently busy with his wife co-parenting their first-born child, a 14-month-old daughter. “As much as I would have loved to have come to D.C. and been around for that process, I just can’t be in two places at once.”

Maybe next time. “The play will always probably be relevant, sadly, and the musical I think gives voice to that in a more contemporary manner,” Sheik says. “Hopefully some people will see it, and it will sort of sink in that it’s really important to listen to the voices of young people.”