By John Riley on February 29, 2020 @JohnAndresRiley 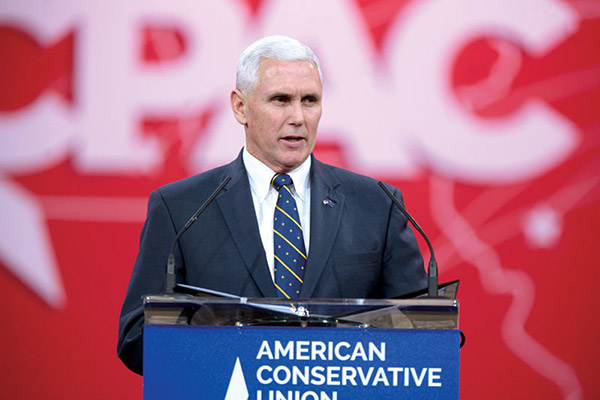 Vice President Mike Pence defended President Trump’s decision to appoint him to lead the White House’s response to the threat of coronavirus, pointing to his response to various public health crises during his time as governor of Indiana.

“I think it might be the main reason why President Trump asked me to do this,” Pence said. “I think by putting me over the administration’s response to the coronavirus, the president wanted to signal the priority that he’s placed on this.”

Pence also made a conservative argument in favor of federalism, saying the most effective way to combat the virus is at the state and local level, rather than a top-down approach from the federal government, reports The Hill.

“[Trump] talked to me about my practical experience as a governor, because a lot of people are aware the CDC is involved, HHS is involved, Homeland Security is involved, and we’ve managed the quarantines,” Pence said. “But honestly, what I learned as governor, it’s your state health department, it’s your local health care providers that are at the tip of the spear in the spread of infectious disease.”

But it is precisely Pence’s response to the HIV epidemic that took root in southern Indiana during his tenure that has been criticized by Democrats, health experts, and LGBTQ advocates.

Most notably, Democratic presidential frontrunner Sen. Bernie Sanders (I-Vt.) referenced news reports claiming that Pence, upon being advised to lift a ban on clean needle exchanges to reduce transmission of the virus, allegedly said he would “go home and pray on it” before making a decision.

Eventually, at the urging of state lawmakers, Pence signed a bill setting up limited needle exchange programs in areas most affected by a spike in HIV rates.

But health experts say his slow initial response was less than sufficient and failed to curb the spread of HIV, especially in among intravenous drug users in rural parts of the state.

The Human Rights Campaign criticized Pence by linking to an article critiquing his response to Indiana’s HIV epidemic in a tweet.

“[Pence] flexed his far-right zeal by defunding health care providers like @PPFA,” the organization said, referring to Pence and fellow Republicans’ efforts to defund Planned Parenthood, “failing to resolve the problem. And with 20+ new HIV cases diagnosed every week at the time, Pence failed Hoosiers who needed swift and strong action to combat the health crisis.”

John Riley is the local news reporter for Metro Weekly. He can be reached at jriley@metroweekly.com
← Previous Story Mike Bloomberg apologizes for anti-transgender comments
Next Story → Kentucky governor defends decision to take photo with drag queens