Signature Theatre shoots and scores with the World Premiere of "Gun & Powder," an enthralling period musical 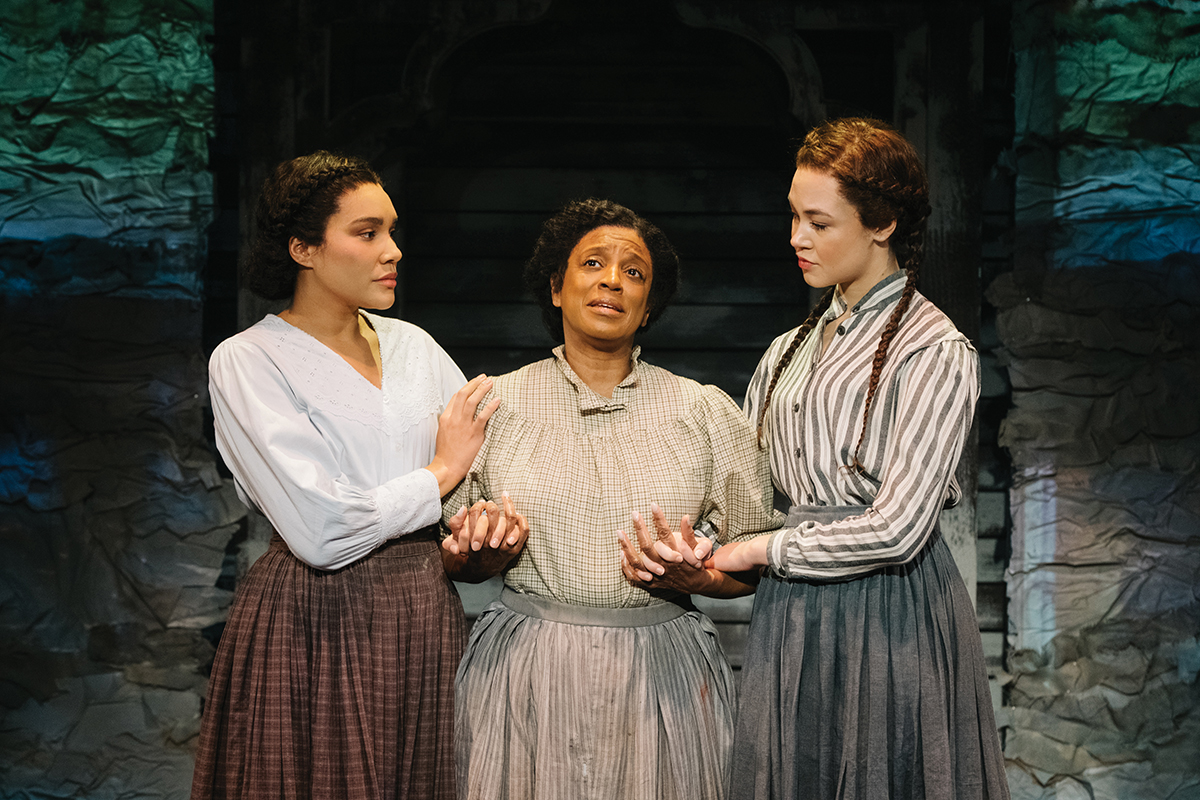 Based on the real-life exploits of outlaw sisters Mary and Martha Clarke, Angelica Chéri and Ross Baum’s musical, Gun & Powder (★★★★☆), in a World Premiere engagement at Signature Theatre, takes off from small-town Texas in 1893 on an intricately layered and gloriously sung journey into American history.

Following a creaky, though essential, setup on the cotton sharecropping plantation where light-skinned black sisters Mary (Solea Pfeiffer) and Martha (Emmy Raver-Lampman) were raised by their dear mother Tallulah (Marva Hicks), the plot rides with the siblings on their questing adventure towards freedom and fortune. Born free, but still yoked to their family’s indebted lot, Mary and Martha decide to leave their ma and their race behind, to attempt a daring act they never could get away with back home in Marlin, Texas: passing for white women. Brave girls lacking much experience of the world beyond the cotton fields, they know that a white woman enjoys another kind of freedom than any black woman could hope to find in the rural South.

“There’s a whole lot a little bit of freedom can do,” sings Martha. But that little taste of liberty could come at an extremely steep price, should the sisters’ deception be discovered — and you just know the truth somehow will come to light. The show draws humor, suspense, and powerful emotional complexity from its textured depiction of Mary and Martha’s dangerous lie. Director Robert O’Hara, fresh off the Broadway triumph of Jeremy O. Harris’ no-holds-barred Slave Play, molds the unconventional biography into a rousingly romantic folk legend, recounted throughout by a chorus of kinfolk. They know all the T on the Clarke sisters and sing it back with proper soul and emphasis. 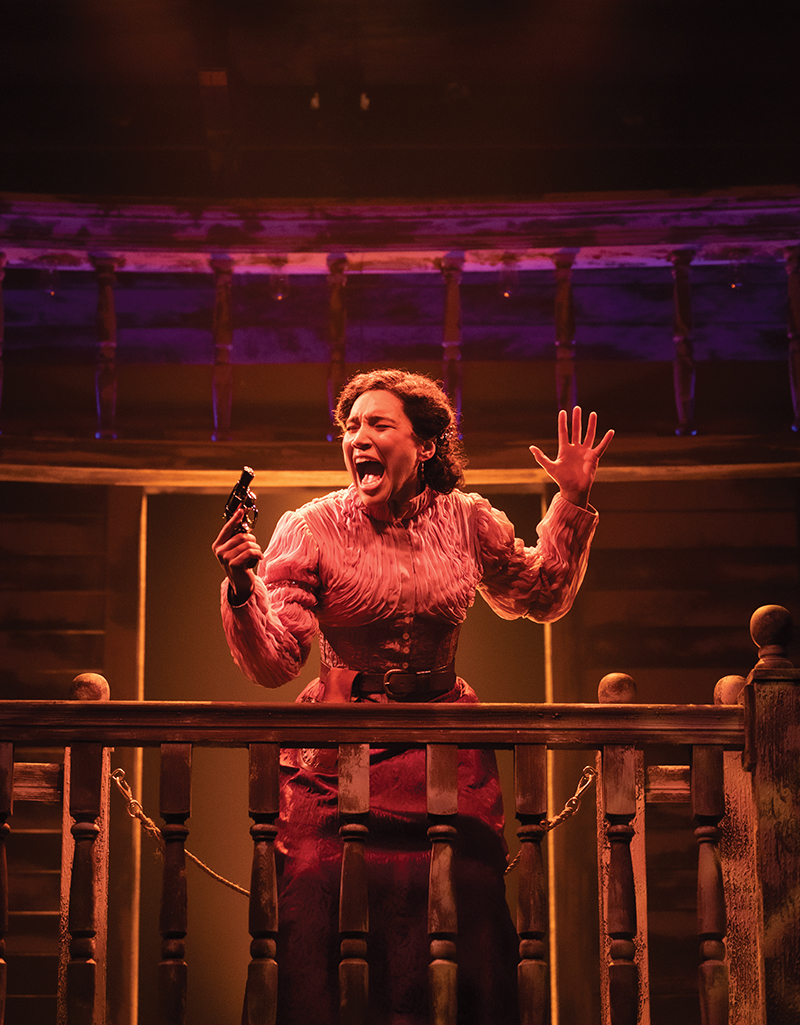 Pfeiffer and Raver-Lampman beautifully complement one another as sisters, and costars, delivering a proud soprano Mary and resolute alto Martha who each hold their own as gun-toting bandits, and women vulnerable in love. Martha is pursued by kind butler Elijah, portrayed by Donald Webber, Jr., as a simple man not nearly as naïve as he might appear. Webber might make him a bit too simple, but as Elijah gains his own taste of freedom, Webber captures the servant’s flowering determination. Mary falls for a very determined man, Jesse (Dan Tracy), who’s rich and white, and none the wiser about the true identity of the woman he loves. Ably essaying a tricky role, Tracy manages to make Jesse a credibly unrefined man of his time, if not too vehemently racist, while still conveying that this smitten guy does truly see Mary — even though he doesn’t really see Mary. 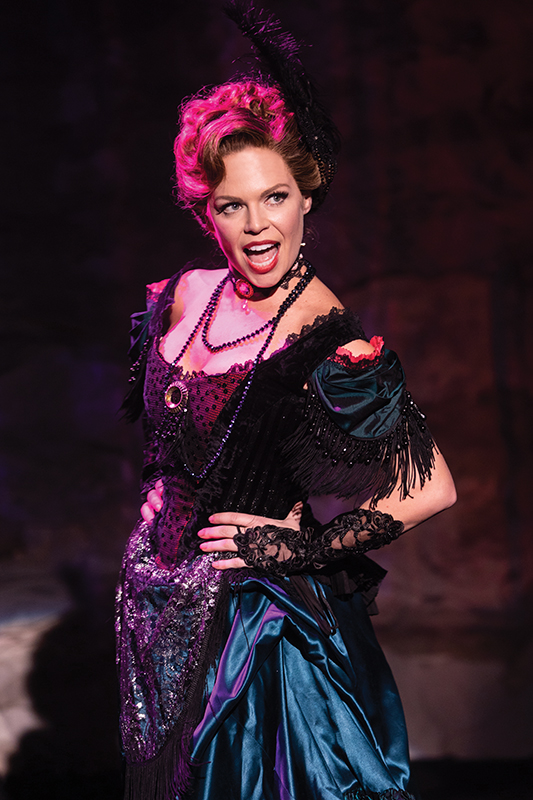 His black housekeepers Sissy and Flo do see right through Mary and Martha. Doing double-duty as kinfolk and playing Sissy and Flo, Yvette Monique Clark and Awa Sal Secka practically are a show unto themselves whether singing, speaking, or merely “Um-hmmm”-ing the maids’ pithy play-by-play of the drama unfolding before their knowing eyes. They cleverly comment on the action without pulling us out of it, a virtue shared by many of the songs, like the ditty “Just Passing Through,” which shorthands polite train conversation in hilarious fashion.

Leading a ten-person orchestra, Darryl G. Ivey keeps Baum’s score chugging along, supporting powerful musical moments like Pfeiffer slaying Mary’s saucy love song “Real Man,” then quickly softening her sass for the achingly vulnerable “The Way I Am.” An entire life and history are represented in the highs and lows put forth in those two songs. Gun & Powder, which began as a collaborative master’s thesis project for writer and lyricist Chéri and composer Baum when they were classmates at NYU, might very well make history of its own someday.

André Hereford covers arts and entertainment for Metro Weekly. He can be reached at ahereford@metroweekly.com. Follow him on Twitter at @here4andre.
← Previous Story Review: Exquisite Agony at GALA Hispanic Theatre
Next Story → Exclusive Photos: The cast of Round House’s breathtaking ‘Spring Awakening’