#BeardedButtigieg is back — and this time it’s real 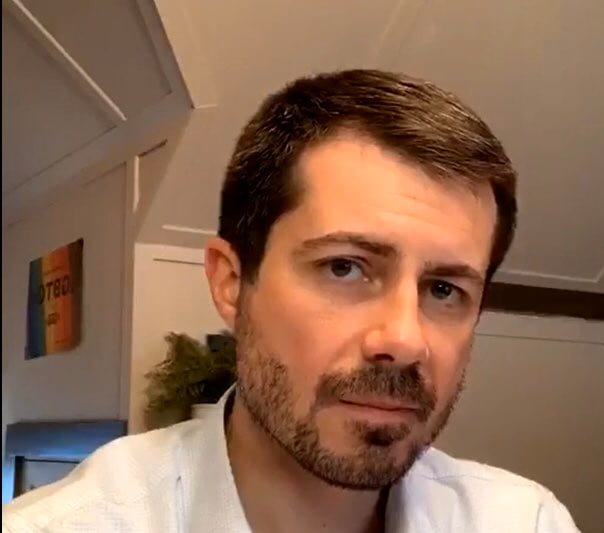 Times are tough at the moment, what with lockdowns due to the coronavirus pandemic, Republicans suggesting older people should die for the economy, and an end to dating as we know it, so here’s a something to brighten your week: Pete Buttigieg has grown a beard.

Thanks to social distancing to try and reduce new COVID-19 infections, the former presidential candidate has been isolating with husband Chasten in their South Bend, Ind., home.

Like many of us, Buttigieg has apparently also abandoned normal grooming routines, swapping his clean-shaven appearance for something a little…scruffier.

Last month, images of the former presidential candidate that had been photoshopped to include facial hair spread like wildfire through gay Twitter. The resulting excitement sparked a hashtag — #BeardedButtigieg — and even a petition for Buttigieg to grow an actual beard.

Well, those wishes were granted this week when Buttigieg debuted his beard on an Instagram Live hosted by husband Chasten, who introduced him by saying, “Look who’s decided to join us…the beard himself.”

And of course we’ll need an update on #BeardEdgeEdge 🤣lol. pic.twitter.com/0X6YPa3hfz

A couple of days later, Buttigieg sent Twitter into meltdown once more with a bearded close-up in an Instagram Live Q&A with Dr. Dara Kass, an ER doctor who has recovered from COVID-19.

“Even though this is a tough time for the country, I hope you’re also finding the benefits and blessings that can come with this shock and this change that we’re living with,” Buttigieg said, Towleroad reports.

“Obviously, I’ve taken advantage of the simple fact of not having to shave every day,” he added.

That’s not to say that Buttigieg had all the fun. One intrepid photoshopper noted the potential for social distancing to give us another #BeardedButtigieg…