By John Riley on March 9, 2020 @JohnAndresRiley 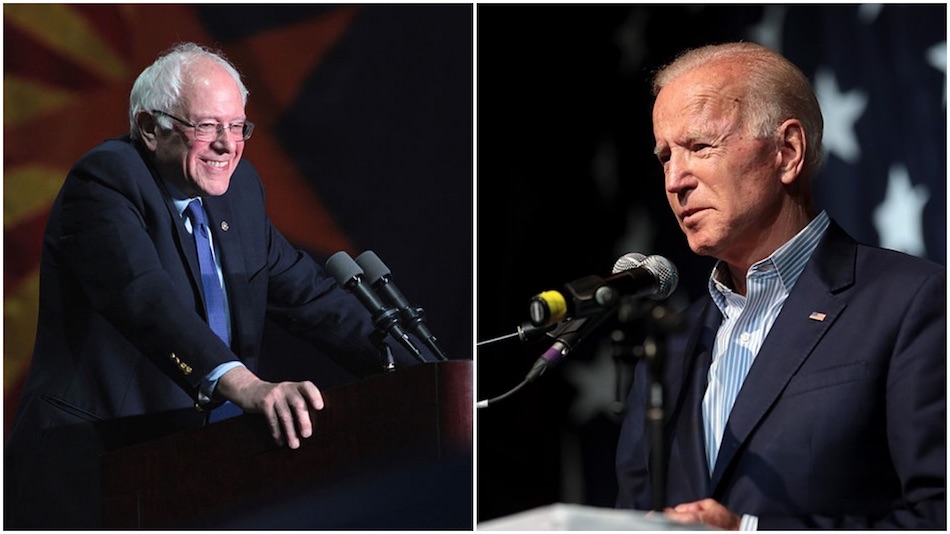 As the Democratic presidential race has narrowed to only three candidates, Vermont Sen. Bernie Sanders is sharpening his attacks against his chief rival Joe Biden, attacking the former vice president’s record on LGBTQ rights, as well as abortion rights and proposed cuts to entitlement and social welfare programs.

In recent speeches, Sanders has begun providing a contrast between himself in Biden on these various issues in an attempt to eat away at support among LGBTQ voters, older voters, and suburban women, after Biden won 10 out of 14 states on “Super Tuesday” last week.

In providing that contrast, Sanders has framed himself as much more consistent than Biden on issues that are important to key segments of Democratic primary voters, and cast himself as the Democratic contender best suited to address those issues because he has not wavered on or flipped his positions, even when doing so may have been more politically convenient.

“The point here is not just to look back 20 years ago, not just to look at consistency, it is to look at which candidate had the guts to cast difficult votes because they were the right votes,” he said on Friday during a news conference, according to The Washington Post.

Sanders’ attacks come as he campaigns ahead of Tuesday’s Democratic primaries in six states, most of which he won in 2016 when he challenged Hillary Clinton for the Democratic Party’s presidential nomination.

If he cannot deliver similar-scale wins in future contests, he will likely fall behind in the delegate count to Biden, making it less likely that he can surpass the former vice president and ultimately win the nomination.

Over the past year, Sanders’ rhetoric on the campaign trail has focused on economics and income inequality, as well as the need to reform the country’s health care system by moving to a single-payer model. But as moderate voters appear to be consolidating behind Biden, Sanders has begun pointing out vulnerabilities in Biden’s record that could be cynically exploited by President Trump in the general election, in the hopes of convincing more left-leaning Democrats to abstain from voting.

Specifically, Sanders has criticized Biden, as a U.S. senator from Delaware, for supporting the military’s “Don’t Ask, Don’t Tell” policy that led to discharges of those accused of being gay, lesbian, or bisexual, and voting for the 1996 Defense of Marriage Act, which prohibited the federal government from recognizing same-sex marriages as legal.

“All I can tell you is, whether it was Iraq, whether it was DOMA, whether it was ‘Don’t Ask Don’t Tell,’ those were difficult votes,” Sanders said at his Friday news conference. “I was there, on the right side of history, and my friend Joe Biden was not.”

Sanders has also attacked Biden for supporting the Hyde Amendment, which prohibits Medicaid dollars from being used to cover abortions or reproductive health care, and for supporting cuts to entitlement programs like Social Security — which Biden, along with President Obama, had held out as an olive branch to congressional Republicans in efforts to pursue a “grand bargain.”

Sanders has continued to maintain that Trump will only be defeated in November only if Democrats can turn out base voters and Democratic-leaning independents in large numbers. He has said that Trump will be a “formidable opponent.”

“We have got to rally our base,” Sanders said. “And that means rally the women’s community, rally the LGBT community.”

Jamal Brown, the press secretary for the Biden campaign, accused Sanders of “lying” about Biden’s record, noting that Biden said on record that he didn’t have an issue with gays or lesbians serving in the military. He also noted that Biden voted to strike anti-gay language from the 1993 defense authorization bill.

.@BernieSanders is lying. @JoeBiden is on record saying he didn't have an issue with gays & lesbians in the military. Receipts below. In fact, he voted to strike anti-gay language from the 1993 defense authorization bill. More receipts: https://t.co/hLeJdd9bA9 https://t.co/OnIGLKVHWG pic.twitter.com/DlruB6DObA

In another tweet, Brown also accused Sanders of trying to muddy his own record on LGBTQ rights, writing that Sanders was “lying.”

“In ’96, he signaled his DOMA vote wasn’t about LGBTQ rights. Receipts below. In fact, Jane Sanders said: ‘We’re not legislating values.’ … Asked if Vermont should legalize equality, Bernie said ‘Not right now.'”

🚨@BernieSanders is lying🚨
In ‘96, he signaled his DOMA vote wasn’t about LGBTQ rights. Receipts below.

John Riley is the local news reporter for Metro Weekly. He can be reached at jriley@metroweekly.com
← Previous Story Same-sex widower asks court to grant him Social Security survivor’s benefits
Next Story → One Million Moms calls for boycott of Marvel’s “The Eternals” for showing same-sex kiss