By John Riley on April 7, 2020 @JohnAndresRiley 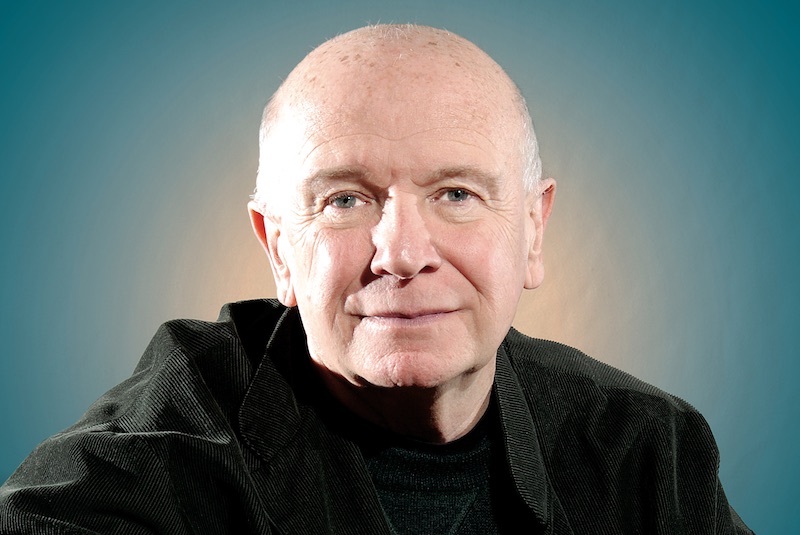 Terrence McNally, the openly gay, multiple-Tony and Emmy Award-winning playwright, died at age 81 on Tuesday, March 24 in Sarasota, Fla., due to complications from the coronavirus, or COVID-19.

McNally, who suffered from chronic obstructive pulmonary disease, had previously undergone surgeries for lung cancer in the 1990s, costing him part of both his lungs — something that made him especially vulnerable to respiratory ailments like those caused by COVID-19.

Over the course of his life, McNally wrote dozens of plays, nearly a dozen musicals, and several operas, several featuring LGBTQ characters or gay-related themes, and others offering biting social critiques. He won the 1995 Tony award for Best Play for perhaps his best-known work, Love! Valour! Compassion!, a play centering around eight gay men vacationing at a lake house. He won the award again in 1996 for Master Class, a comic drama about opera diva Maria Callas giving lessons about art and life, and was nominated a third time in 2014 for the play Mothers and Sons.

McNally won the Tony Award for Best Book of a Musical in 1993 for Kiss of the Spider Woman and in 1998 for Ragtime, and was nominated two more times, in 2001 and 2015, for The Full Monty and The Visit. He won the 1990 Emmy for Outstanding Writing in a Miniseries or a Special for Andre’s Mother, a film about a woman’s inability to cope with her son’s death from AIDS. He also won a lifetime achievement Tony in 2019.

McNally’s passing was mourned by various directors, actors, and others in the theater community, several of whom shared with Metro Weekly their thoughts and memories of working with McNally.

“Terrence was my best friend in college and we remained friends and colleagues through the years,” Michael Kahn, the former artistic director of the Shakespeare Theatre Company, said in an email. “His rich talent, compassion and humor illuminated the experiences of LGBTQ American life not just for the community itself but was an important contribution to the understanding and acceptance of gay life in the second half of the twentieth century to the present. His work will live.”

Joy Zinoman, the director of the Studio Acting Conservatory and founder of the Studio Theatre recalls a time when Studio would stage a McNally play annually. Zinoman said that several of his works, including Frankie and Johnny in the Clair de Lune, The Lisbon Traviata, Love! Valour! Compassion!, and Lips Together, Teeth Apart were among the most beloved by Studio audiences.

Zinoman said McNally’s plays taught her that “within a single work, it was possible to be both profound and popular, witty and heartbreaking. And it confirmed that writing great roles for actors will always be the key — the transference between the actor and the audience will always lie at the heart of what matters in the theater.” She noted that the Studio Acting Conservatory uses Frankie and Johnny every semester to teach students about realistic acting.

“[McNally’s] legacy enlarged the audience for the gay story in our time,” Zinoman said. “Because he wrote characters, both straight and gay, through all the years of the AIDS pandemic, he helped us to understand our common humanity and gave succor to whole audiences.”

David Muse, the current artistic director of Studio Theatre, said McNally’s plays have been central to his time in the theater world. His first acting job in the late 1990s was a role in what was at the time considered McNally’s biggest Broadway flop, And Things That Go Bump in the Night, at the former American Century Theater, and he now works for a theater company that has produced at least five McNally plays.

“His plays have been a central part of American theatre for decades, and for good reasons. He was a writer of real humanity, he was ahead of his time in his depictions of gay life on stage, and he made us laugh,” said Muse. “His death is the first of the COVID-19 crisis to touch me this directly, and it made the situation feel much more real for me, and sadder.”

Eric Schaeffer, co-founder and artistic director at Signature Theatre, called McNally a “giant in the field” who not only told wonderful stories but was exceedingly kind.

“We had the opportunity to have Terrence at Signature Theatre to work on our productions of The Rink, Kiss of the Spider Woman, and The Visit,” said Schaeffer. “His spirit, generosity, and intelligence in the room was a beacon of light and talent. He will be sorely missed but his words and stories will thankfully live on.”

“Terrence McNally is one of our most important contemporary American playwrights,” Molly Smith, artistic director at Arena Stage, told Metro Weekly in an email. “Funny, acerbic, brave and emotionally compelling, he was one of our best. His dazzling range from dynamic plays like Master Class and Frankie and Johnny in the Clair de Lune to book writing for musicals like Kiss of the Spider Woman and Ragtime is remarkable. Yesterday, I was working on casting at Arena Stage for Catch Me If You Can, which he was the book writer on, and was stunned by the news. We have lost a giant of American theater.”

“Terrence McNally was never afraid to take chances or be provocative in his art. His first Broadway play, And Things That Go Bump in the Night, which he wrote when he was only 24 years old, is part of the legacy of Woolly Mammoth, as it was produced to great acclaim early on in our history and catapulted us into becoming the Woolly we are today,” said Maria Manuel Goyanes, artistic director at Woolly Mammoth Theatre Company. “He paved the way for so many Woolly writers — it’s impossible to overestimate his invaluable contribution to our field.”

Philip Crosby, the executive director of the Richmond Triangle Players, in Richmond, Va., recalled producing McNally’s Corpus Christi — a 1998 production depicting a Jesus-like figure and his disciples as gay — for the city’s annual Acts of Faith Festival, the largest faith-based theater festival in the country. The play was so highly controversial that when the Triangle Players tried to perform it, they were picketed by Christian organizations, many of whom attempted to “scare” the troupe into canceling the production.

McNally was often praised for tackling the issue of HIV/AIDS in his writing, but also dedicated his personal life to fighting the disease that he saw ravaging his community, becoming one of the founding fathers of Broadway Cares/Equity Fight AIDS. Lane Beauchamp, the organization’s director of communications, hailed McNally’s contributions and extended condolences to McNally’s husband, Tom Kirdahy.

“Truly among the greatest playwrights in Broadway history, Terrence gave voice to both the voiceless and those who can stand tall, not only through his art but also his actions. He was a steadfast champion for civil and LGBTQ rights onstage and off,” Beauchamp said in a statement. “He gave us unforgettable characters who told delicate, brilliant, courageous and unforgettable stories that reflected the lives and dreams, joys and heartbreak of us all.

“Terrence believed the most important function of theatre is to create community. We are so lucky that he included Broadway Cares/Equity Fights AIDS in his own community by championing us and our work right from the start. He was a loyal and true friend, a champion and member of our Board of Trustees since our earliest days.

“In 1992, Broadway Cares helped publish the book Broadway Day & Night: Backstage and Behind the Scenes. In it, Terrence wrote: ‘I am mourning not the Broadway that was but the Broadway that AIDS has seen to it will never be. If this is nostalgia, I don’t know how we’re expected to handle it except to continue to do the best work we can. It’s the only fitting memorial for those we love and have lost.'”

Actor, producer, and writer James Brandon recalled working closely with McNally after the theater company he was working for in Los Angeles did a revival of Corpus Christi in 2006.

“One of the main gifts I got out of it, as a producer and playing the lead part of Joshua, was working directly with Terrence, and getting to know him,” Brandon told Metro Weekly. “You knew you were in the presence of a master. He’s a master of American theater, but he never projected something like that. There’s this idea that someone who’s considered a master is full of arrogance and pretentiousness, but Terrence was the absolute opposite of that. He was the most humble, kind, sweet, and generous man I’ve ever met. He was just so unassuming and accessible to everyone he met.”

Brandon gained insight into McNally’s character in how the playwright dealt with significant backlash — including having a fatwa placed on his life — over the content of Corpus Christi when it was first released.

“Amongst all of that, he said the greatest thing he’ learned in his life is that kindness always prevails,” Brandon said. “When he told me that, that became the crux of what Corpus Christi meant to be and how I portrayed the character. But also, it changed my life: it’s the lesson I’ve carried with me through everything I’ve done in life and everything I will do. That’s something I cherish and hold dear, especially now, at this most impossible time that we’re dealing with, that the whole world is dealing with.”

Actor and author of the young adult novel, The Best at It, Maulik Pancholy, who cut his teeth on Broadway when he appeared in McNally’s It’s Only a Play, recalled the late playwright as “kind and generous and sharply funny.”

“The courage of his work has inspired me as a theater artist, a gay man, and as a human,” Pancholy said. “We are all so lucky for the legacy he leaves behind.”

Actor Michael Urie said McNally was the first playwright he ever fell in love with, directing a production of Lips Together, Teeth Apart in high school, and later appearing in Sweet Eros and Bringing it All Back Home.

“His plays taught me more than any class,” Urie said.

“You can’t rehearse a play without mentioning Terrence McNally,” added Urie’s husband, actor Ryan Spahn. “No matter what play you’re working on. His influences saturate everything. He gave voice to the queer experience. Without him, the LGBTQIA community wouldn’t be where it is today. He defined the game.”

Editor’s Note: On March 25, 2010, Metro Weekly published a cover interview with Terrence McNally. We dug into our archives and are republishing it below as a way of remembering him. The cover portrait, as well as the interior shot, showing McNally with actors John Glover and Malcolm Gets, was photographed by our art director, Todd Franson. Open in full screen for the best viewing experience.

John Riley is the local news reporter for Metro Weekly. He can be reached at jriley@metroweekly.com
← Previous Story Jesse Tyler Ferguson and Zachary Quinton to honor Terrence McNally with livestream of ‘Lips Together, Teeth Apart’
Next Story → Spotlight: Streaming Shakespeare at Folger