Told through the story of one woman's activism, Slay the Dragon casts partisan redistricting as a threat to democracy as we know it

By John Riley on April 9, 2020 @JohnAndresRiley 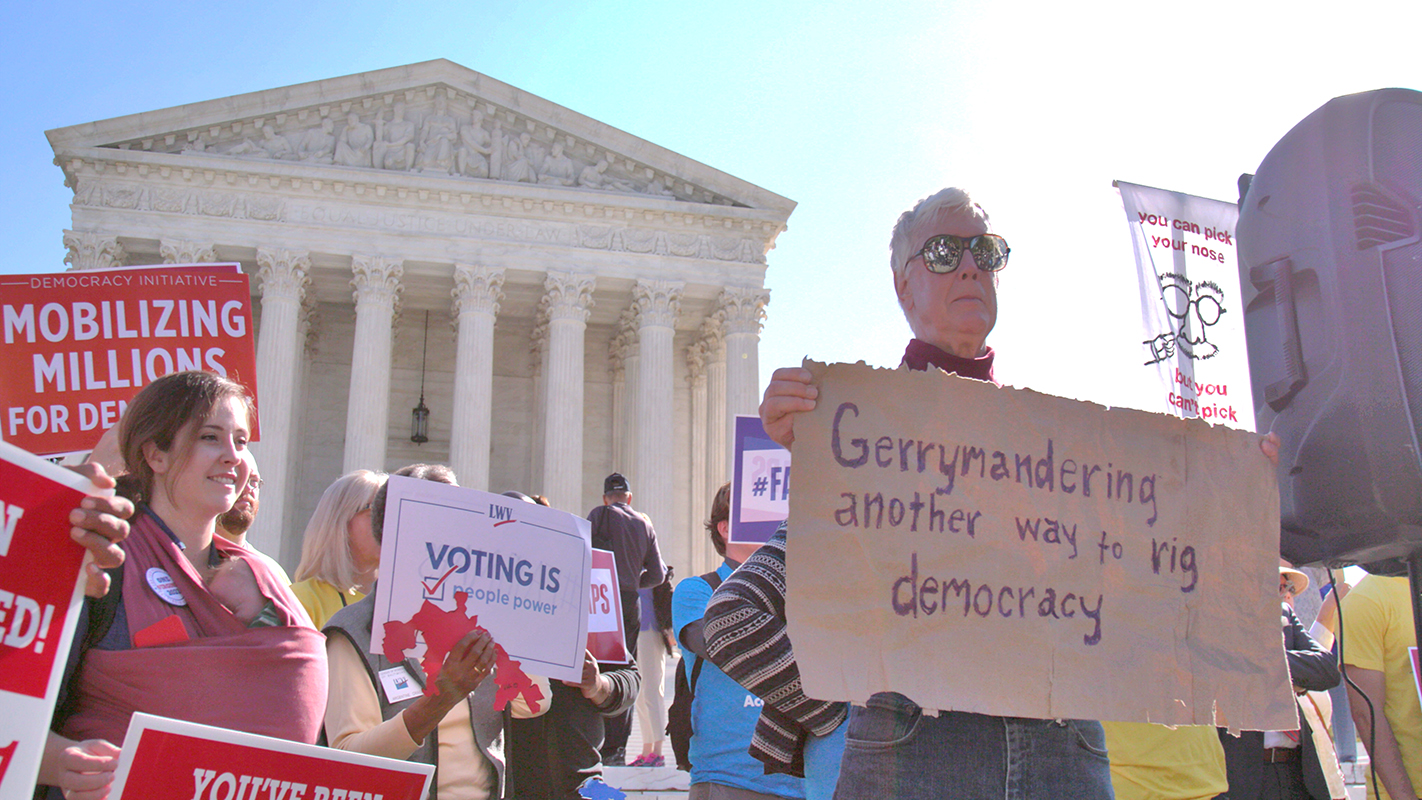 Two days after the 2016 presidential election, Katie Fahey made a Facebook post that would forever alter the direction of her life. As she sat at her kitchen table in Caledonia, Michigan, Fahey, then 27, scrolled through her newsfeed, seeing posts from her friends, family, and people of all political stripes sniping at one another — casting blame and expressing anger and resentment over the divisive election. Regardless of the author, each post expressed a common theme: a deep distrust of — and despair about — the political system and the idea that their worries and concerns are being ignored by political elites.

“What I started to see is that a lot of the political players in the industry, none of them are looking out for the average person,” Fahey says. “It opened my eyes to how much the people of the country need to be the ones at the center of these political fights.”

Fahey typed a short post. “I’d like to take on gerrymandering in Michigan,” it read. “If you’re interested in doing this as well please let me know.” It was followed by a smiley face emoji.

Within hours, the post had gone viral, receiving so many likes and comments that Fahey found herself creating a group, “Voters Not Politicians.” She connected with other activists around the state to plan town halls, with the intent of placing a voter-led initiative on the 2018 ballot to replace partisan gerrymandering with a nonpartisan, citizen-led redistricting panel.

Fahey’s story — and her uphill battle against voter apathy, skepticism, and well-financed special interest groups flooding radio and television with misinformation about her efforts — is the central narrative of documentary Slay the Dragon (★★★★★).

Originally intended by directors Barak Goodman and Chris Durrance to serve as a historical account of gerrymandering, the film, currently on multiple streaming platforms, serves as an educational primer for those who don’t consider themselves politically astute. It delves into how political district lines are drawn in America and how technology, coupled with an abundance of Census data, has allowed politicians to choose their voters rather than the other way around, effectively cementing themselves in power.

The film specifically highlights the people behind REDMAP, a project of the Republican State Leadership Committee that was dedicated to increasing the GOP’s control of Congress, governor’s offices, and state legislatures by getting elected Republicans to draw district lines in a way that would ensure permanent or long-lasting majorities. It also tracks the machinations of a Wisconsin-based group of anti-gerrymandering activists who attempted to challenge the legislative lines drawn by Republican lawmakers, ultimately taking their fight to the U.S. Supreme Court.

Against the backdrop of these stories, Goodman and Durrance make clear their point of view: that partisan gerrymandering is bad for America’s politics and that voters must begin taking their power back through citizen initiatives that establish independent or nonpartisan redistricting commissions.

“This is a game that’s been played for over a century, and in each election,” Durrance says, noting that both parties have historically agreed to lines that ensure incumbents are protected. “I think Democrats went into 2010 thinking that it was going to be another round of ‘You scratch my back and I’ll scratch yours.’ They didn’t see the signals that the Republicans were sending.” 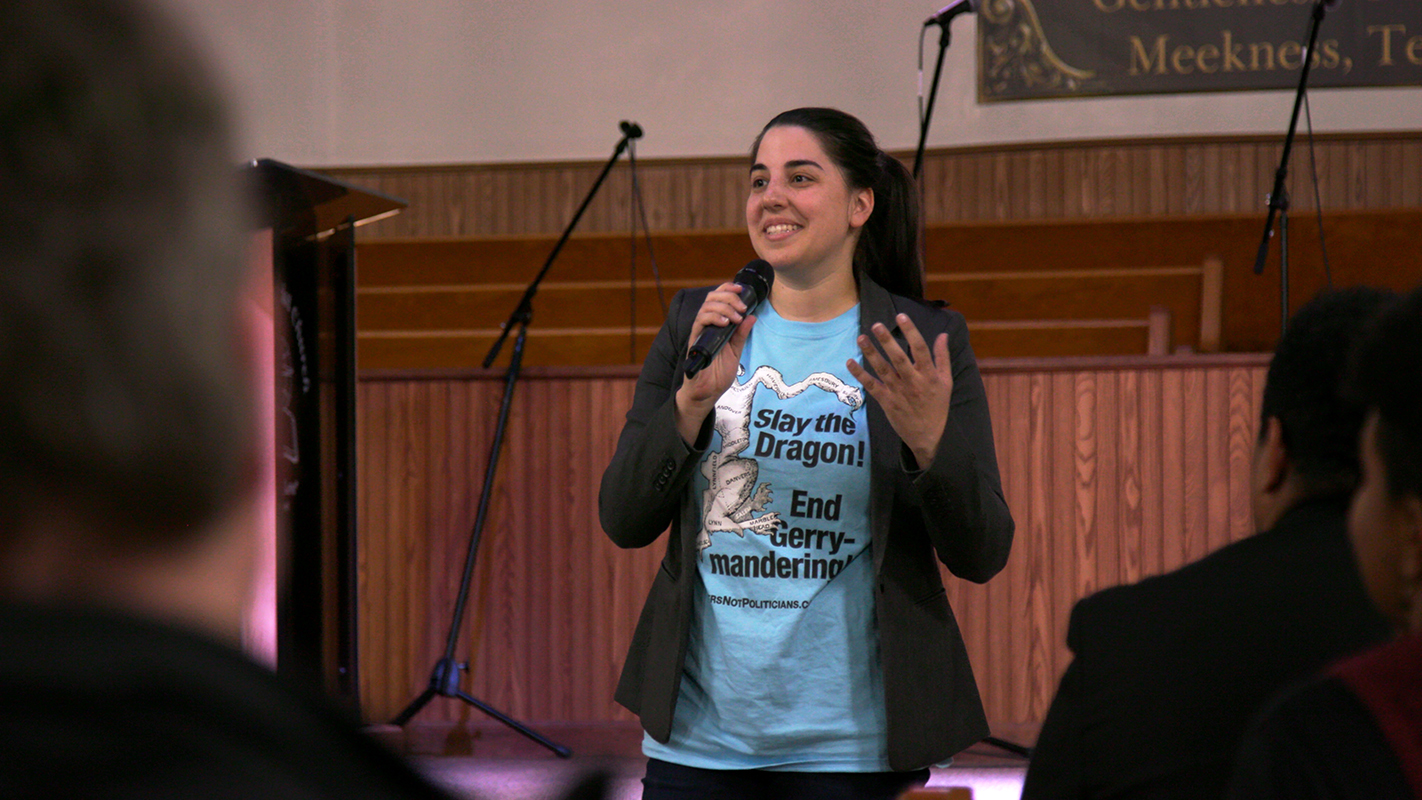 In Goodman and Durrance’s view, many of the more controversial political stories of the past decade have their roots in gerrymandering, from union-busting laws in Ohio and Wisconsin to Flint’s water crisis — rooted in cost-cutting measures pushed by the Republican-run legislature and exacerbated by a statewide “emergency manager” law — to the failure of down-ballot Democrats to gain traction even as President Obama was being re-elected in 2012 and Democrats were winning statewide elections.

The film is crafted in a way that all but ensures emotional investment in Fahey’s fight against a system that’s designed to silence any dissent. You’ll reach for Kleenex while watching Fahey, in private, shed tears of frustration, her shoulders slumped as she pushes herself to the brink of exhaustion while collecting signatures to place the initiative on the ballot.

Beyond Fahey, Goodman and Durrance hit similar emotional peaks capturing the struggling people of Flint desperately searching for potable water. And then there’s the justifiable anger of watching the resignation of Justice Anthony Kennedy — and confirmation of Brett Kavanaugh to replace him — effectively closing the door on any hope that the courts will rule partisan gerrymandering unconstitutional. Even the few victories in the film, such as when Fahey’s initiative makes it onto the ballot, are preceded by scenes that will make viewers grind their teeth in outrage.

Indeed, if there’s any chief villain in the film, it’s judges — both elected and appointed, at the state and federal levels — who appear to be willing to latch onto any legal justification for stripping away what little power Americans have to ensure politicians are accountable to those whose interests they’ve been entrusted to represent. The battle lines become clear: the judges give enormous leeway to the politicians, and the rest of us might as well be serfs on the feudal manor.

“The way I viewed the problem was ‘the system isn’t working,'” says Fahey. “It’s not about electing one person because the whole system needs to be torn down. And to do that, let’s start with the basic building blocks of democracy, which is redistricting, like literally how our elections end up being determined and who we get to vote for and what our representation looks like.

“Until the rules can be changed so that people can be the ones making those decisions, it’s going to be a really big uphill battle to be fighting that mindset that people in office hold about how much more informed they are than regular citizens.”

Critics of the film might be inclined to believe that the film is simply a piece of left-wing propaganda meant to demonize Republicans. But that argument is a red herring. The only reason why some Republicans, like those behind the REDMAP project, will assume the role of villains in some viewers’ minds is because they happen to have been the beneficiaries of the last round of redistricting in 2011.

Slay the Dragon is one of those consequential political films that comes around every generation, seeking to shake Americans out of their slumber and spur them to action on a specific topic. But unlike the issue of gun control in Michael Moore’s Bowling for Columbine or climate change in Al Gore’s An Inconvenient Truth, the issue at the heart of Slay the Dragon is one that resonates on both sides of the aisle.

In the end, Fahey, the woman from Middle America, assumes the role of David against the political establishment’s Goliath in defending a uniquely American principle: that the governed should have a say in who runs their government.

“We are the repository of power, not the politicians or the government, and that is a message that resonated across party lines,” Goodman says. “I think one of the big takeaways from the film is that you can turn your anger into a positive progresive direction by framing it as ‘we the people,’ coming from the bottom-up. Katie tapped into that same anger, but turned it into a positive direction, [saying] that we can do something to take our government back.”

Slay the Dragon is available now on most streaming services, including Apple TV and Amazon Prime. Visit www.slaythedragonfilm.com.