Robert Jeffress: "Whenever you counterfeit something, you cheapen the value of the real thing" 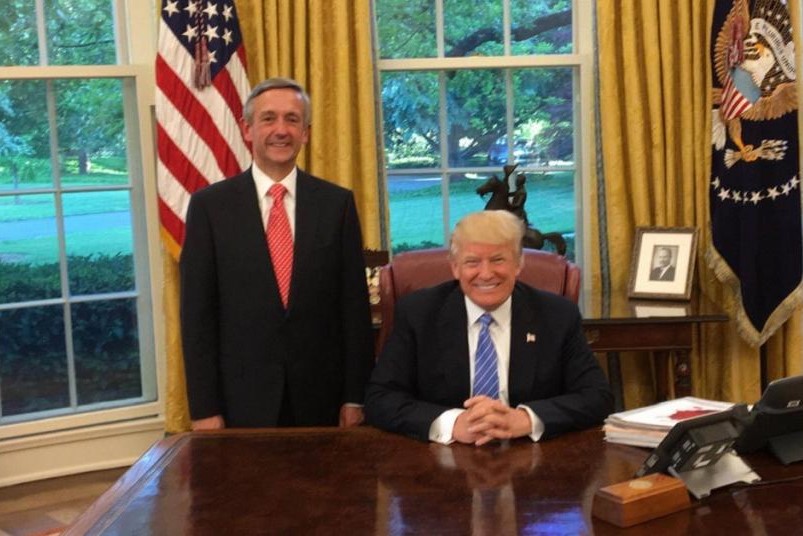 Robert Jeffress, a pastor and member of Donald Trump’s “Evangelicals for Trump” coalition, has described same-sex marriages as “counterfeit” and blamed them for a decline in the number of couples choosing to marry.

Jeffress made the comments to OneNewsNow, the news division of anti-LGBTQ hate group the American Family Association, in an article headlined: “Marriages on decline? You can thank Joe marrying Joey”

After the National Center for Health Statistics reported that marriage rates had dropped to an all-time low — 6.5 marriages per 1,000 people in 2018 — Jeffress claimed that the decline was due to the Supreme Court’s 2015 ruling which legalized same-sex marriage nationwide.

“Whenever you counterfeit something, you cheapen the value of the real thing,” Jeffress said. “And if you expand marriage to, basically, any definition you want — two men, two women, three men and a woman — I mean, if marriage is what you want it to be, why bother to get married at all?”

However, Jeffress did say that the “ship has sailed” on reverting to heterosexual-only marriage, saying that the moral high ground couldn’t be reclaimed by Christians who oppose same-sex civil marriage.

“It will never change is my prediction,” Jeffress said. “But that doesn’t mean the Church of Jesus Christ cannot continue to teach what the Bible says about marriage.”

The NCHS noted that marriage rates had “steadily declined” between 1982 and 2009. Marriage equality was banned in all 50 states until 2004, when Massachusetts began licensing and recognizing same-sex marriages.

Jeffress, lead pastor at First Baptist Church in Dallas and Fox News Contributor, has been described as one of Trump’s closest evangelical advisers. He is a member of the “Evangelicals for Trump” coalition, which was created to help mobilize evangelical voters in the 2020 election.

Jeffress is also a vocal opponent of LGBTQ rights, having previously called gay people “filthy” and linked homosexuality with bestiality.

He has said that LGBTQ people have a “miserable lifestyle,” called homosexuality “perverse,” said same-sex marriage was “a sign of the coming apocalypse,” and described transgender people as “a rebellion against God’s plan.”

Jeffress has also previously advocated for the use of conversion therapy — the widely debunked practice of trying to forcibly change a person’s sexuality or gender identity — including suggesting that a lesbian teenager who had “seriously contemplated suicide” over her sexuality should undergo conversion therapy.

Bright Light x2 celebrates the LGBTQ community, one fabulous track at a time