Freddie’s partners with Amazon to provide meals to frontline workers

On Saturday, May 2, a dozen employees in face masks bustled throughout Freddie’s Beach Bar and Restaurant, assembling turkey and ham sandwiches, tossing salads, and preparing hot meals, including ravioli and meatloaf. The food was then placed into takeout containers, complete with utensils and cartons of water, and packed into boxes. The boxes were then delivered to local workers on the front lines of the COVID-19 pandemic, a “thank you” to first responders.

“For dinners, we’ve been making meat lasagna, meatloaf, chicken pesto fettuccine, and then [for] vegetarians we’ve been doing cheese ravioli, eggplant parmesan, and tie-dyed tortellini,”  ays Tony Rivenbark, the manager of Freddie’s. “The Arlington County Police Department came and picked up some of the food. We’ve also delivered some to the Arlington County Sheriff’s departments and the 9-1-1 center, and to the Arlington and Alexandria Fire Departments, as well as the fire department at Fort Myer and at Reagan National Airport.”

Next week, during National Nurses Week, meals will be delivered to workers at the Virginia Hospital Center, and for the two weeks following, meals will be sent to the Cooperative for a Hunger-Free Arlington, to support struggling local families that may be experiencing food instability.

Freddie Lutz, the restaurant’s owner, says the idea to provide the meals was the brainchild of online shipping giant Amazon, which recently announced its intention to deliver more than 10,000 meals to frontline workers and vulnerable populations throughout the month of May.

Arlington was recently chosen as the site of Amazon’s planned “HQ2” headquarters, and last year, the Arlington County Board approved the company’s request to construct twin 22-story towers and a surrounding complex, with construction scheduled to finish in 2023.

A spokesperson for Amazon told Metro Weekly that the company had previously planned to reach out to its neighbors in nearby Crystal City, but that outreach became even more necessary after the COVID-19 pandemic forced local bars and restaurants to close their doors temporarily. The company decided to show its support for the local community during this unprecedented and difficult time.

Meanwhile, to carry out its stated intent of delivering ready-made, individually-packaged meals, Amazon decided it would be best to partner with local restaurants that have developed and fostered strong relationships with the community.

“I got a call from Amazon and they said to me, ‘We love Freddie’s Beach Bar, and we’d like to partner up with you and do a delivery thing for the first responders, police, hospitals,’” says Lutz. “I was delighted to accept their invitation. In the course of our discussion, we decided to reach out to a few of the restaurants on 23rd Street and let a few of them help out with this thing, too, so that we can involve some of the other people on the street.”

Other restaurants being brought on board with the project include Urban Thai, Enjera Restaurant, which specializes in Ethiopian and Eritrean cuisine, and Crystal City Sports Pub.

Brian Huseman, vice president of public policy at Amazon, said in a statement that the company is “proud to work alongside Freddie’s Beach Bar and Restaurant, a beloved local restaurant in our new neighborhood, to ensure that we’re thanking our neighbors who are keeping us safe and caring for our neighbors who need extra support right now with hearty meals throughout May.”

Lutz is optimistic about the project, and feels Amazon HQ2 will be “wonderful neighbors.”

“I think this is the neighborly thing for them to do, and it’s enabling me to put my own staff back to work,” he says. “It’s very meaningful for us to be able to do that, as people are eager to get back to work, and this is an opportunity that may actually help segue us into reopening, at least for curbside service and carryout.”

“I think this is the neighborly thing for [Amazon] to do, and
it’s enabling me to put my own staff back to work.” –Freddie Lutz

As someone who sits on the board of the Crystal City Business Improvement District, and is president of the 23rd Street Merchants Group, Lutz makes an ideal partner for Amazon, given his relationships with other business owners in the area.

“To be honest with you, we’re the only gay bar in Northern Virginia, and I think one of the reasons Amazon loves us is because we bring that sort of diversity and fabulousness to Crystal City,” Lutz says, referring to both his restaurant’s larger-than-life personality — embodied by its trademark purple decor and assortment of Barbie dolls, beach-themed decorations, and plastic flamingoes — and his highly visible profile in the area.

“I think Freddie’s is probably the only restaurant in Crystal City that’s a small business and very active in almost every aspect of the community,” says Rivenbark. “We’ve always been active in everything, and not just in the gay community, but the neighborhood.”

Lutz was able to use his connections to reach out to the Crystal City Business Improvement District, which has assisted in making the meal delivery efforts more “green” by using its connections with Boxed Water to provide beverages alongside the packaged meals. The BID also provided compostable containers that will not clutter up landfills once disposed of.

“Small businesses are the backbone of our community and a key component of a vibrant downtown,” Tracy Gabriel, the president and executive director of the Crystal City BID, said in an email to Metro Weekly. “During this challenging time, the Crystal City BID is focusing its efforts on finding ways to enhance the long-term viability of our businesses.”

Gabriel said the BID is “pleased to support this worthy cause, which will support a number of establishments on Crystal City’s Restaurant row, while also providing meals to those in our community who need it most.”

While many across America have been skeptical of big corporations generally, and Amazon, specifically, for a host of reasons — including its miniscule effective federal income tax rate, its efforts to stop workers from unionizing, its reliance on Chinese manufacturing, and concerns that it will force smaller local businesses to shutter their doors permanently — Lutz and Rivenbark are much more optimistic about HQ2’s presence in the neighborhood.

“People, from my personal experience, are inherently afraid of change,” says Lutz. “I’m just thrilled by this neighborly outreach and the chance to work with them on this wonderful project.”

“As a property owner myself in Arlington, and from talking to others, I’ve gotten mixed feelings from some different people,” says Rivenbark. “But the one thing that I see as a huge advantage to local businesses specifically in Crystal City is that Amazon will only be able to provide food and meals for 25 percent of their employees in their building. The other 75 percent of their employees will have to go out into the community to spend money.

The Amazon spokesperson said that while they cannot speak to the specifics of any plan, the company has installed small cafeterias in its Seattle office that are not intended to feed all employees, thus pushing Amazon workers into the surrounding neighborhoods to patronize local businesses. The hope is for HQ2 is to cultivate an atmosphere similar to that which exists in Seattle, where employees regularly spend money at local establishments, helping to boost revenues and make the surrounding neighborhood “a place you want to go to, not drive through.”

Amazon also intends to install street-level retail options in its properties, with the idea of introducing tenants that fit in well with the surrounding neighborhood, the spokesperson said. The company plans to have a “significant amount” of new retail at HQ2 and has launched a process to incorporate feedback from local residents as to which shops should be installed.

Lutz and Rivenbark are hopeful that the influx of new Amazon employees — an estimated 25,000 in total, once construction is completed — will help bring a needed influx of revenue to Freddie’s and other restaurants in Arlington’s 23rd Street corridor.

Both men note that Freddie’s, and the Crystal City neighborhood in general, took a significant hit after the departures of the Naval Sea Systems Command in 1994, the Naval Air Systems Command in 2000, the U.S. Patent and Trademark Office in 2002, and thousands of other federal employees following the Base Realignment and Closure process in the mid-2000s, a cost-cutting measure that shut down what the federal government considered “excess” military installations.

“When I started at Freddie’s 17 years ago, we were open at lunch every day,” says Rivenbark. “And after the federal closures happened, the entire Crystal City restaurant industry lost out big time, and it’s lasted for maybe 12, 14 years. But now, we’re going to be able to open for lunch once again, the pandemic aside.”

Adds Lutz, “All because of Amazon.”

Did mismanagement kill the DC Eagle? 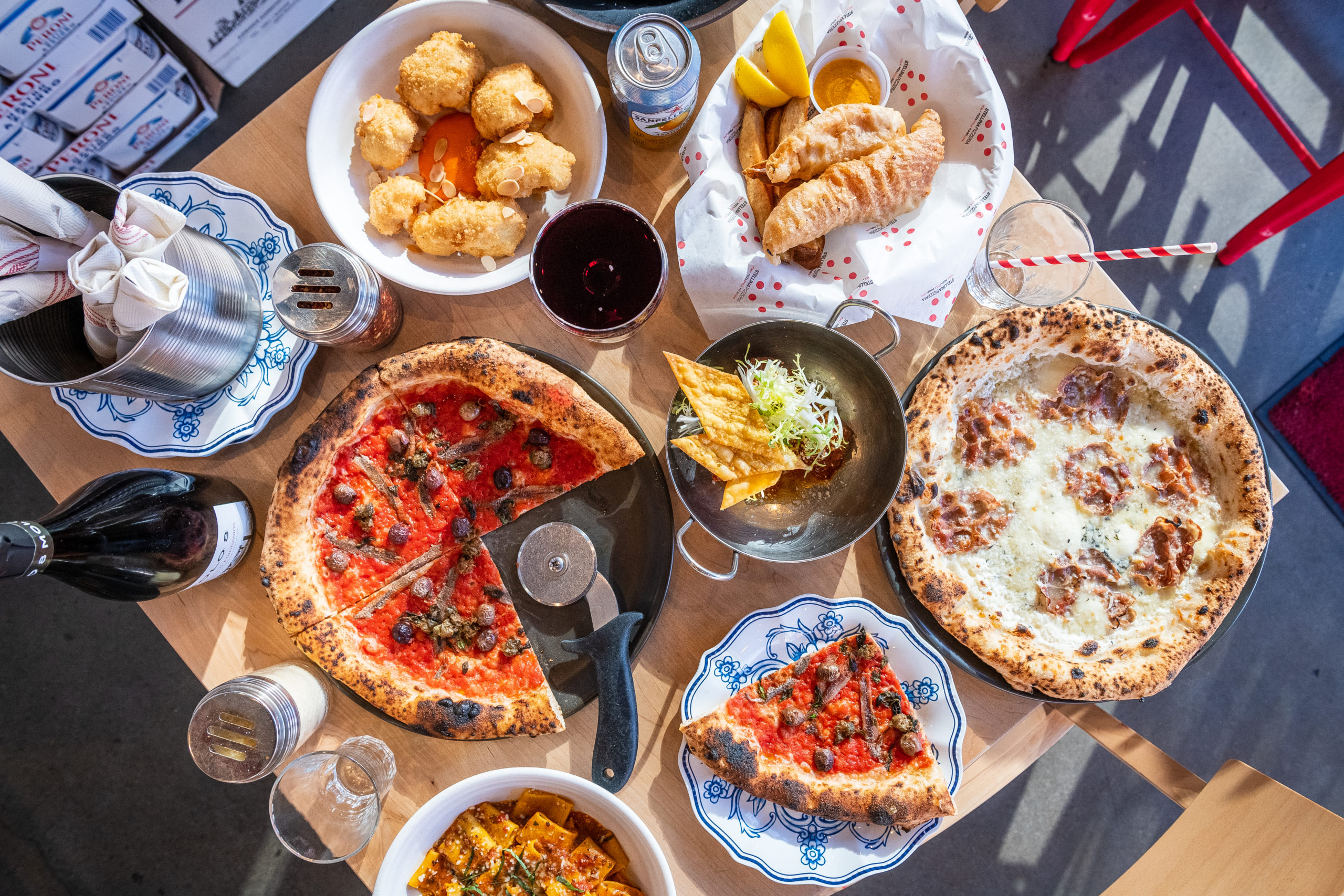