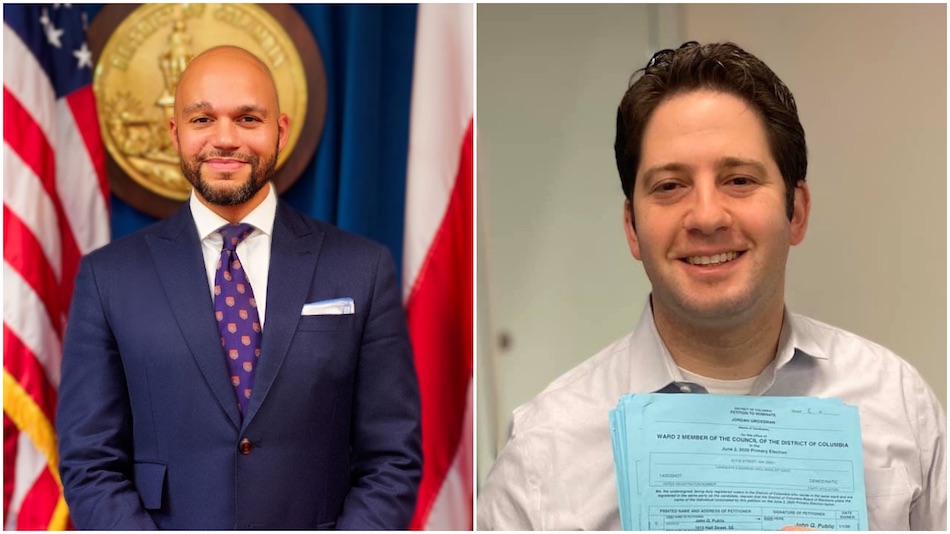 Councilmember Robert White (D-At-Large) and Ward 2 Council candidate Jordan Grossman earned perfect scores from the Gay and Lesbian Activists Alliance on the group’s election questionnaire, giving them both something to boast of when courting LGBTQ voters on the campaign trail.

The questionnaire, mailed to every candidate seeking elective office in D.C. every two years, is based on GLAA’s priorities as outlined in their “Building on Victory” policy brief.

Candidates’ answers are rated on a scale from -10 to +10, with points added or subtracted based on their positions on various LGBTQ-related issues dealing with health, public safety, human rights, youth, seniors, and Home Rule. Candidates are also evaluated on the breadth and depth of their answers, their understanding of the issues raised, and their demonstrated record on LGBTQ rights, including any past activism or advocacy.

Although GLAA does not endorse candidates in partisan elections, the rating is often used by some voters as a way to gauge a candidate’s LGBTQ friendliness, and is often taken into account by other LGBTQ organizations, such as the Gertrude Stein Democratic Club, when they endorse candidates. (There is also a substantial amount of overlap between Stein Club and GLAA in terms of membership.)

Altogether, it’s not surprising that Ward 2 candidates scored higher on the questionnaire, as Ward 2 has one of the more visible and politically active LGBTQ communities within the District. In their questionnaires, all Ward 2 candidates largely agreed with GLAA’s aims, and the top ratings earners — Grossman, Fanning, Kennedy, Putts, Venice, and Pinto — have records indicating professional or personal advocacy on behalf of the LGBTQ community.

Grossman’s perfect rating was due, in part, to his substantive answers to the questionnaire, as well as his record on LGBTQ issues. He previously worked as deputy legislative director for Sen. Amy Klobuchar (D-Minn.) and as chief of staff for HHS Assistant Secretary Dr. Karen DeSalvo. He is also a board member of the DC Chapter of the American Constitution Society, where he hosted events about discriminatory laws and outdated legal practices that harm the LGBTQ community. He advocated for pro-LGBTQ bills, supported by GLAA, that have since stalled in the Council, even questioning staffers of Attorney General Karl Racine about Racine’s lack of support for sex work decriminalization at a GLAA meeting.

Councilmember Jack Evans (D-Ward 2), who is running for the seat he resigned from earlier this year after being threatened with expulsion by his Council colleagues, has earned perfect ratings from GLAA in past cycles. But the organization said that it would not issue ratings for candidates who “in their capacity as elected officials, were expelled from any elected post, or resigned, for ethics violations that include, but are not limited to, conflicts of interest, self-dealing, and malfeasance.”

The remaining two Ward 2 candidates, Yilin Zhang and Daniel Hernandez, earned +5 and +3.5, which are still considered “good” ratings but are based on a limited record on LGBTQ issues and answers that express general agreement with GLAA’s positions on issues, but could use a little more substance.

For the Council’s At-Large seats — two of which are up this cycle — no one else even comes close to White, an LGBTQ ally who has spoken out against anti-LGBTQ violence and co-authored legislation requiring the collection of LGBTQ health data.

White is the co-sponsor of a bill to decriminalize sex work, a bill to amend the D.C. Official Code by removing gendered terms or language, a bill to prohibit the use of anti-LGBTQ panic defense, and a bill on providing health care for LGBTQ senior and seniors with HIV. All of those bills reflect GLAA’s priorities as outlined in their policy brief.

Statehood-Green candidate Ann Wilcox and Libertarian Joe Bishop-Henchman did not respond to GLAA’s questionnaire, and received ratings of +0.5 and zero, respectively. Wilcox’s half-point was due to a record providing legal representation to GetEqual and Occupy D.C. protesters.

Republican candidate Marya Pickering earned a -3 on the questionnaire, due to her opposition to most of GLAA’s priorities, a lack of a demonstrated LGBTQ record — her responses on LGBTQ issues often speak in generalities about protecting D.C. residents or taxpayers in the general sense — and her citation of research by the Family Research Council, an anti-LGBTQ organization, in opposing the decriminalization of sex work. 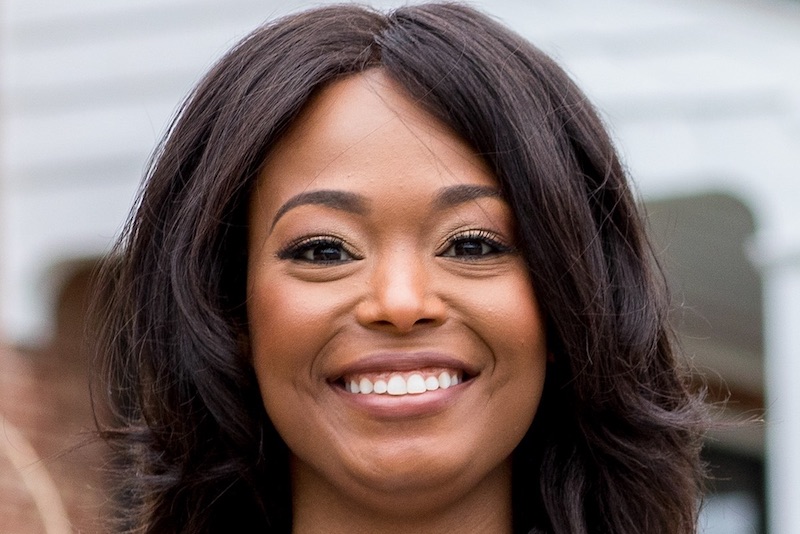 In Northwest D.C.’s Ward 4, Democratic candidate Janeese Lewis George bested incumbent Councilmember Brandon Todd, earning a +6.5 rating to Todd’s +6 rating. Both failed to get a full amount of points based on their record and depth of substance on their questionnaires, though George’s higher rating was due to her near-universal agreement with GLAA’s priorities.

GLAA noted in its writeup of candidate ratings that Todd “has been mostly supportive” during his time on the Council, but “has not lead on LGBTQ issues, including in his role as chair of the Committee on Government Operations.”

In Ward 7, none of the five candidates challenging Gray — who has an extensive record of pro-LGBTQ advocacy from his time as councilmember, including stints as Council Chairman and mayor — submitted a response to GLAA’s questionnaire.

But Democratic Anthony Lorenzo Green earned a +4 rating, getting full marks on the LGBTQ “advocacy” plank, particularly his call for reforming how the Metropolitan Police Department interacts with community members and for supporting sex work decriminalization. Green is one of only three LGBTQ candidates seeking office this cycle, with the others being Ward 2 candidate Fanning and At-Large candidate Bishop-Henchman.

Democrats Kelvin Brown, James Leroy Jennings, Rebecca Morris, and Veda Rasheed did not respond to the questionnaire and have no record on LGBTQ issues. 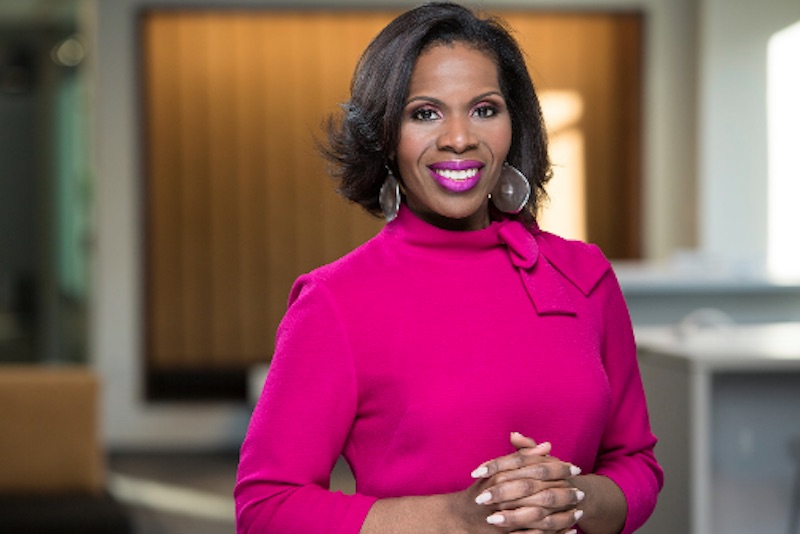 In contrast to Ward 7, where most candidates didn’t reply to the questionnaire, all Ward 8 candidates responded, but, for most, their ratings were significantly below the average Council candidate.

Democrat Yaida Ford bested the Ward 8 field with a +7 rating, indicating agreement with GLAA’s policy priorities, substantive answers, and a record of activism, having previously served as legislative counsel for the Committee on Human Services under former Councilmember Jim Graham (D-Ward 1).

Democrats Mike Austin and Trayon White, the incumbent councilmember, earned ratings of +4.5, with GLAA noting that both men provided “little substance” in their responses and citing their opposition to sex work decriminalization. Democrat Stuart Anderson, the grandfather of a gender nonbinary child, earned a +3 for disagreeing with GLAA on multiple issues. Republican Nate Derenge, who opposes every single one of GLAA’s priorities, earned a -2 on his questionnaire.

For those who lost points, the biggest sticking point for many candidates appeared to be the organization’s support for decriminalizing sex work in the District. Councilmembers Todd and White conflated decriminalization with human trafficking of young girls, as did Ward 4 candidate Edwards. Other candidates simply don’t support decriminalization, with Ward 8 Anderson saying he has trouble supporting the idea but is “open to further discussion.”

Emmelia Talarico, a spokesperson for No Justice No Pride, one of the organizations spearheading the DECRIMNOW campaign pushing for a bill to decriminalize sex work, which has stalled in the Council, said that many of the candidates’ responses as they pertain to sex work are “pretty uninformed” and effectively amount to fear-mongering.

“Our bill doesn’t affect minors, and when you look at the studies, the leading cause of sex trafficking of young people is within their families,” Talarico said. “Our bill wouldn’t change the laws around coercion. Our bill would have allowed two sex workers to work together, because under current law, if you do sex work with another person, that becomes an additional crime.”

“We have multiple studies online that say that decriminalization wouldn’t increase the amount that happens here in the illegal sex industry,” she said. “This is about removing criminal penalties for the city’s most marginalized, who will also be voting this year.”

Talarico noted the DECRIMNOW campaign has seen a lot of opposition from groups that can be described as “sex worker-exclusionary feminists,” who oppose decriminalization on the grounds that sex work is “anti-woman.” She noted that some of those organizations working with former sex workers might also suffer financially if the decriminalization bill passed, as they often rely on client referrals from the Metropolitan Police Department.

“You see a lot of misinformation being spread along those lines from organizations that either stand to profit by killing the bill, or would lose profit by allowing the bill to pass,” she said.

She also criticized most 2020 Council candidates — as well as incumbent D.C. Councilmembers who aren’t up for re-election this year — for failing to engage directly with transgender sex workers in the Eastern Avenue corridor.

“Anthony’s the only one that has gone down to Eastern Avenue to talk to any of those girls,” she said, referring to Ward 7 candidate Green. “You don’t have any other city politician going down there to talk to them girls.”

She compared the talking points being used to try and block decriminalization efforts to those used to impede progress on other human rights issues.

“When you think about a lot of progressive issues in the time we’ve been alive, how many do you think have gotten held up or curtailed over ‘What about the children?!?!’ Think about gay marriage, anything involving trans people, it’s the same argument,” Talarico said.

GLAA’s first batch of ratings evaluated Democratic, Republican, Statehood-Green Party, and Libertarian candidates for D.C. Council, all of whom will appear on the ballot in the June 2 primary. GLAA will rate independents seeking Council seats later this year, prior to the Nov. 3 election. The organization also allows candidates who did not initially submit a questionnaire, or those that did not receive a favorable rating, to submit revised answers in hopes of boosting their ratings.

To read candidates’ answers to GLAA’s questionnaire, or for more information, visit www.glaa.org/projects/elections.