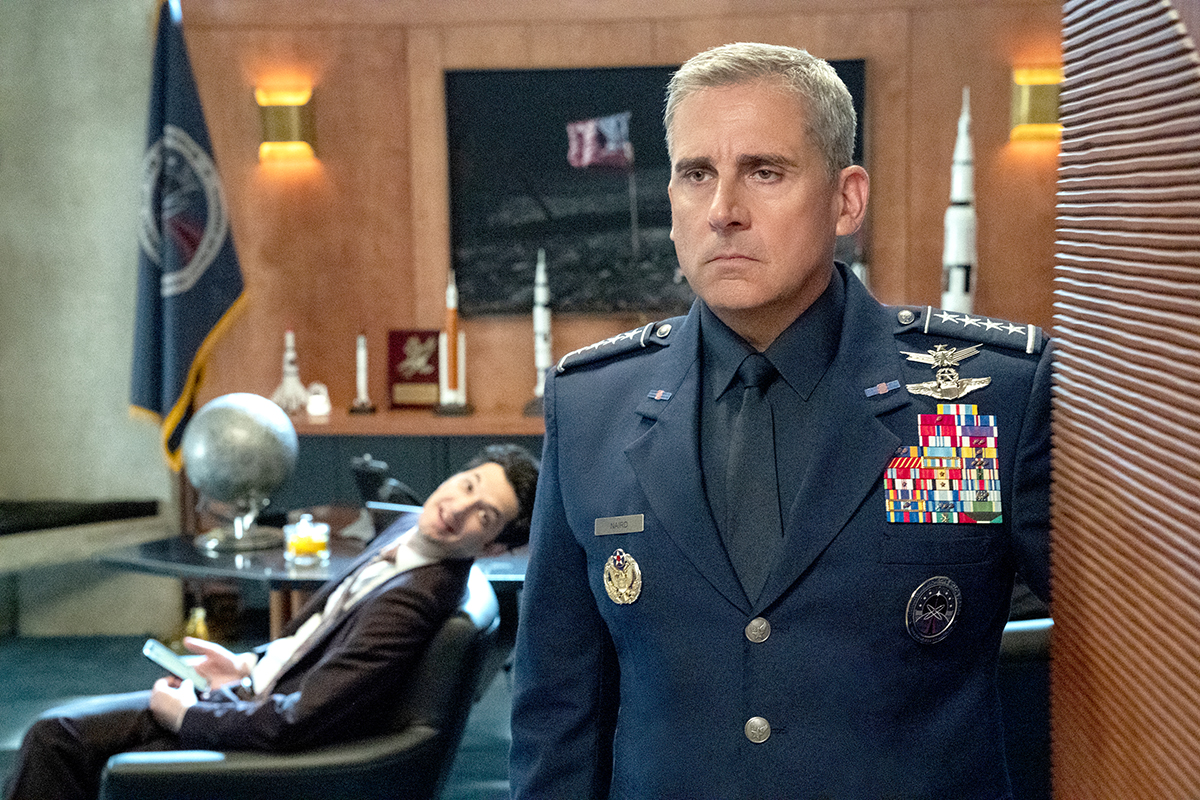 The new Netflix military spoof Space Force takes several half-hour episodes to lift off into its shaky orbit as workplace-dramedy-meets-Trump-era satire. Co-created by Steve Carell and Emmy-winning producer Greg Daniels, the standard-bearer of sitcoms that take their time to marinate (The Office and Parks and Recreation), Space Force (★★☆☆☆) is never bad, but it’s not that funny, which registers as a major disappointment given its cast of comedic heavy-hitters and a seemingly sure-fire premise.

Carell stars as General Mark Naird, elevated in episode one to the rank of four-star general and the command of POTUS’s hastily assembled Space Force, the sixth branch of the U.S. military. Naird represents only a slight variation on Carell’s comic persona of affably dim and unfailingly decent, although the general does frequently exhibit the characteristics of good leadership. He’s adaptable, courageous, and he’s a shrewd reader of people. He just has a hard time getting the quirky lot around him to fall in line, starting with chief scientist, Dr. Adrian Mallory (John Malkovich).

Tweedy, persnickety Mallory has devoted his career at NASA to advancing mankind’s exploration and understanding of space, and gets righteously teed off at the idea of nations turning the cosmos into a war zone. But, as he and Naird are constantly compelled to work together — on everything from lunar war games to coordinating an emergency satellite rescue-mission with a “chimpstronaut” named Marcus — they begrudgingly come to complement one another. They’re an unlikely but likable duo.

At one point, Naird half-jokingly refers to Mallory as his aide-de-camp, leading to Malkovich repeatedly over-enunciating (under-enunciating?) the proper French pronunciation. The actor did much the same memorably and hilariously as a persnickety CIA analyst in the Coen brothers’ Burn After Reading. Let’s just say that the performances — including those by Jane Lynch, Patrick Warburton, Noah Emmerich, and Diedrich Bader as Naird’s fellow Joint Chiefs — hold few to no surprises. If anything does surprise, it’s the show’s tortured pace and shocking under-use of Lisa Kudrow as Naird’s wife, Maggie, sidelined early on in a subplot that unfolds too slowly and without much payoff.

The description applies as well to the show, which tries to be many things at once, all well-meaning and well-considered, but the rhythm and temperature of the comedy (and the commentary) feel miscalculated. Even the good bits run long, while gags and patter tend to sit there, or worse, sink into pockets of dull air. From the jokes to the camerawork and editing, the series lacks the snap of winning comedy — that is, until a brisk, brief peak through episodes five and six, both of which were directed by Oscar-nominated queer filmmaker Dee Rees. Not every viewer will have the critic’s fortitude or incentive to slog through Space Force‘s early hit-or-miss trajectory to reach that intended target — so strap in for a low-revving launch and keep a finger on the eject.

Space Force is available for streaming on Netflix. Visit www.netflix.com.

André Hereford covers arts and entertainment for Metro Weekly. He can be reached at ahereford@metroweekly.com. Follow him on Twitter at @here4andre.
← Previous Story Getting Familiar with Harvey Guillén
Next Story → Tituss Rising: An interview with Titus Burgess