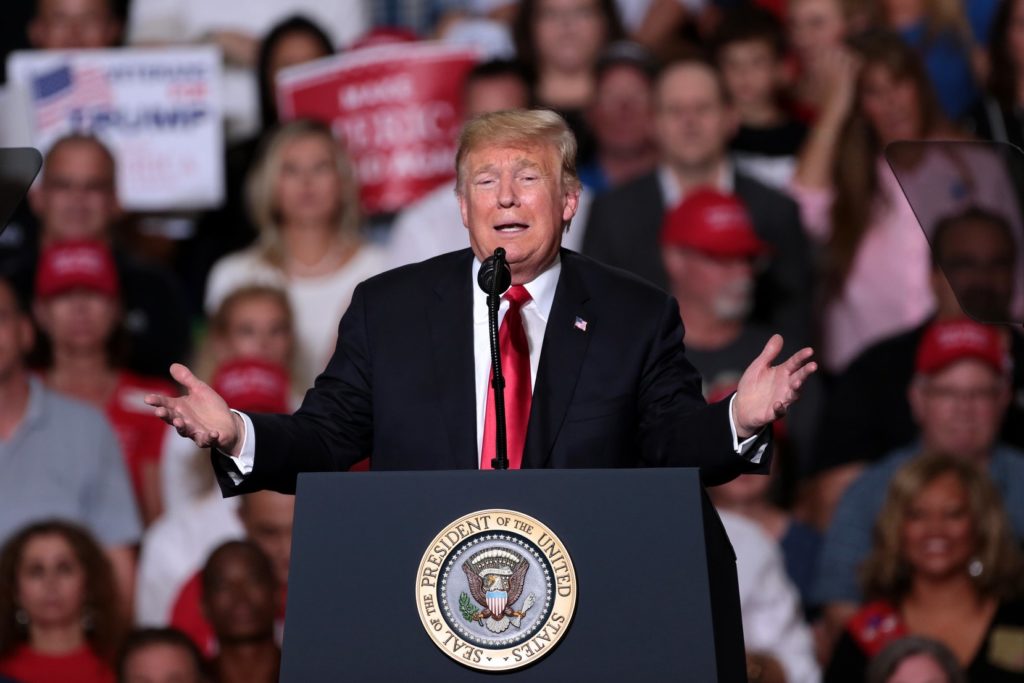 As President Trump prepares to relaunch his re-election campaign next week — which was suspended due to the COVID-19 pandemic and the nationwide unrest that’s been marked by protests against systemic racism, racial profiling, and police brutality — the Republican National Committee has issued a memo touting what the party sees as the president’s positive LGBTQ agenda.

The memo’s release came a day before the Trump administration eliminated health care protections for transgender people in the Affordable Care Act, and a week after the administration argued that foster care agencies should be allowed to discriminate against same-sex couples.

Among the talking points contained in the memo, the RNC notes that Trump was the first Republican nominee to mention LGBTQ rights in his acceptance speech at the Republican National Convention, promising to “do everything in my power to protect LGBTQ citizens.”

A large portion of the memo’s first section focuses on Trump’s appointment of Richard Grenell to two positions: first, as the U.S. Ambassador to Germany, and, more recently, as the acting Director of National Intelligence, which made him the first openly gay person to hold a cabinet-level position.

The GOP memo even quotes Earl Fowlkes, the president and CEO of the Center for Black Equity, speaking in his capacity as the chairman of the Democratic National Committee’s LGBTQ Caucus, and the Victory Institute, with both praising Grenell’s appointment.

The memo also touts an initiative spearheaded by Grenell to encourage countries in Africa, Asia, and the Caribbean that criminalize homosexuality to repeal their anti-LGBTQ laws.

The memo touts a recently adopted FDA policy that reduced the deferral period for gay and bisexual men wishing to donate blood to three months since the point of last sexual contact, the administration’s goals and its dedication to providing funding, both domestically and internationally, to combat the HIV epidemic, and its decriminalization initiative. The memo even credits the president for actions taken in 2017 by U.N. Ambassador Nikki Haley to condemn an ongoing “purge” in Chechnya where LGBTQ individuals were targeted, kidnapped, tortured, detained, and, in some cases, even killed, claiming the administration put pressure on Russian officials to denounce the campaign and intervene to stop the extrajudicial detention of LGBTQ people.

The Human Rights Campaign ridiculed the RNC memo, and offered its own list of 33 anti-LGBTQ actions taken by the Trump administration in the president’s first term.

The president has opposed the Equality Act, has appointed hundreds of anti-LGBTQ judges to various positions, including to the U.S. Supreme Court and appeals courts — so many, in fact, that 1 in 3 Trump circuit court nominees has a record of explicitly opposing LGBTQ equality, according to Lambda Legal.

HRC even noted in its own press release that Trump allegedly joked about Vice President Mike Pence’s opposition to LGBTQ rights by saying: “Don’t ask that guy — he wants to hang them all!”

HRC noted that the Trump administration has filed legal briefs urging federal courts to find that LGBTQ people are not protected by statutes intended to prohibit sex-based discrimination, has backed away from Obama-era interpretations of federal law that once protected LGTBQ people, and issued a regulation to grant religious exemptions to federal contractors that would condone any decision they made to fire LGBTQ workers because of discomfort with their sexual orientation or gender identity.

The administration has also come under fire for its ban on transgender service members, its attempts to forcibly discharge people living with HIV from the military, its attempts to eliminate LGBTQ protections from the Affordable Care Act, as well as the overall elimination of President Obama’s signature law, its support for allowing private and religious schools that discriminate against LGBTQ students to receive taxpayer money in the form of vouchers, and its stated refusal to hear complaints from transgender students who claim they were discriminated against when they were barred from restroom or locker room facilities that match their gender identity, among other actions.

The full list of actions for which LGTBQ activists have criticized the president has since been posted on HRC’s website.

“The RNC is hallucinating and advancing misleading and disingenuous rhetoric. Yes, Trump has taken many ‘unprecedented’ steps, but those steps have been to undermine and eliminate rights protecting LGBTQ people, not empower us,” HRC President Alphonso David said in a statement. “Appointing a small handful of gay people out of thousands of nominations and making a very few — and unfulfilled — pledges can hardly qualify as accomplishments. Don’t gaslight us. The Trump-Pence administration is the most virulently anti-LGBTQ administration in decades — the RNC cannot put lipstick on a pig.”

John Riley is the local news reporter for Metro Weekly. He can be reached at jriley@metroweekly.com
← Previous Story Three transgender candidates running for the Vermont House of Representatives
Next Story → Republican National Committee adopts its 2016 platform verbatim, including anti-LGBTQ provisions