Darrin Pesall claims he burned the flag because he found it offensive. Now the owner of the flag wants to press charges. 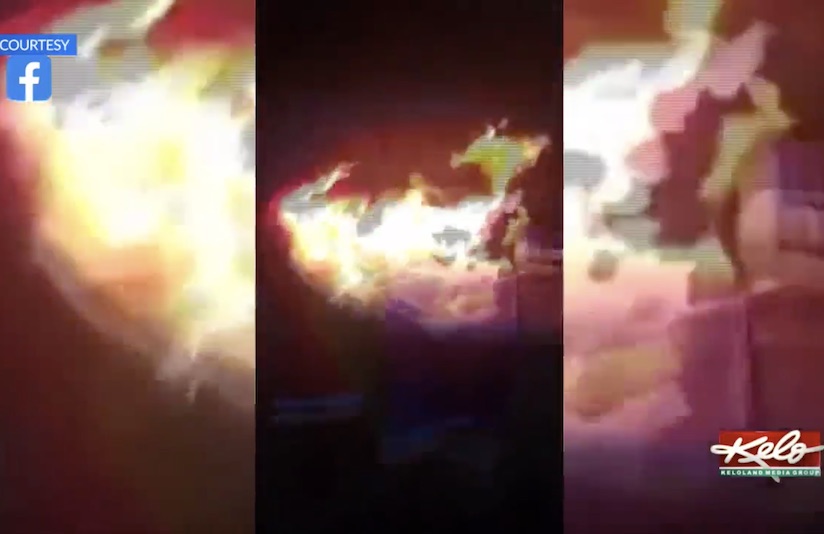 A South Dakota man who burned an LGBTQ Pride flag while spouting obscenities about gay people on Facebook Live says he regrets his actions, but believes critics are blowing the incident out of proportion.

Darrin Pesall, of Webster, can be heard yelling in the video — which he posted but has since taken down — as the flag goes up in flames: “Your f—ing flag that deserves to burn, burn, burn. Burn you queer sons of bitches!”

He later apologized for posting the video of the flag burning on Facebook, telling Sioux Falls-based CBS affiliate KELO that it “shouldn’t have been done the way it was done.

“I apologize to the people I offended,” he said “It was absolutely totally wrong.”

Pesall claimed he was driven to burn the flag because of protests he’s seen from people demanding that the Confederate flag or war monuments featuring Confederate figures be torn down.

“Much like the uproar over tearing down war monuments; the controversy over the confederate flag because they’re offensive. The public display of that type of thing is offensive to me,” Pesall said.

The man who claims it’s his flag, Troy Kriech, of Webster, says he wanted to put up a flag for Pride Month in June.

Even though he’s only experienced a few anti-gay incidents, he knew he was taking a risk and might receive negative comments from his neighbors.

But he says he never expected someone to go to the lengths Pesall allegedly went to, including allegedly stealing the flag.

“I was just disturbed, disgusted — especially coming from someone I know, that they would actually do something that hateful and disgusting,” Kriech told KELO.

But Pesall claims the flag he burned isn’t Kriech’s, adding, “I burned a flag — not the flag that’s in question and what everyone is having such a shit show about.”

Kriech now wants to pursue charges against Pesall, but the Day County State’s Attorney Danny Smeins notes that, while the incident is being investigated, South Dakota’s hate crime law does not include gender-based protections, which could apply to instances of anti-LGBTQ discrimination.

As such, Smeins claims, the most Pesall could be charged with is misdemeanor theft charges, or destroying another’s property, or, potentially, lying about the crime or attempting to cover it up.

But Kriech, who is currently in the middle of moving to Minneapolis because it’s more accepting, insists he wants Pesall charged.

“I don’t think it’s right, not only for me — but for the gay community — gay people who live in small communities who are afraid to come out,” he told KELO. “It’s hard to be gay in South Dakota.”