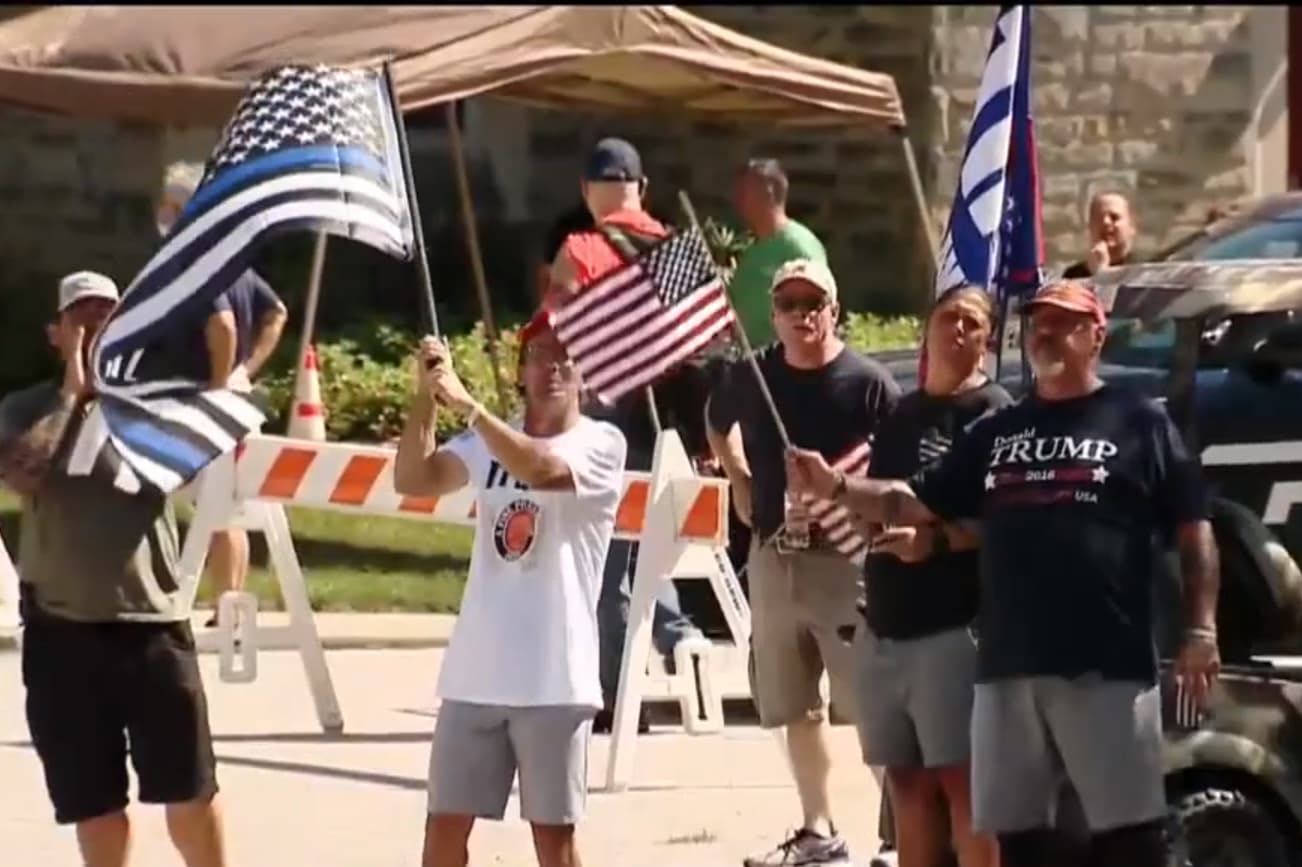 “Back the Blue” protesters — Photo: KDKA

A supporter of President Donald Trump yelled “kill transgenders” during a protest targeting a Black Lives Matter rally in Pennsylvania.

The so-called “Back the Blue” rally was intended to show support for police, and gathered across the street from a Black Lives Matter rally in Shaler Township, Pa., on Saturday. Participants wore clothing with Trump-supportive symbols and waved “thin blue line” flags.

CBS affiliate KDKA reports that a few dozen people took part in the Back the Blue rally, while the Black Lives Matter rally was attended by more than 100 people.

Interactions were reportedly predominantly peaceful, with both sides chanting slogans — “Black Lives Matter” on one side, and “All Lives Matter” on the other — and staying away from one another.

Police attended, and blocked part of the street, but the only movement between groups was some Back the Blue attendees moving into the street towards the Black Lives Matter rally, KDKA reported.

However, things escalated when one member of the Back the Blue rally, wielding a bullhorn, started to yell “Kill transgenders!” repeatedly at the Black Lives Matter protesters.

The Black Lives Matters protesters are heard reacting in shock to the chants, with one person yelling, “Fuck you!” in response.

As the shouts bounce back and forth between the opposing rallies, the video ends with the Trump supporter apparently yelling “kill faggots” — although the Pittsburgh City Paper reported it as “you’re a faggot.”

The leader of a Back the Blue rally in Pittsburgh switched from chanting "All lives matter" to "Kill transgenders" pic.twitter.com/T6ZaEyj4sN

Attendees of the Black Lives Matter rally told KDKA that the Back the Blue protest was unexpected.

Sophia Kachur, an organizer of the rally, said, “We believe in supporting Black and Brown people, so it’s like why would anyone think that’s a bad message?”

KDKA reported no further incidents and said both groups left the area that evening.

The outburst of anti-LGBTQ hate from the “Back the Blue” rally came just days after Neo-Nazis rallied in Williamsport, Pa., yelling racist and homophobic slurs.

And last month, a mob of white men attacked Black Lives Matter protesters in Pennsylvania and told them to take their “faggot energy” and leave the area.