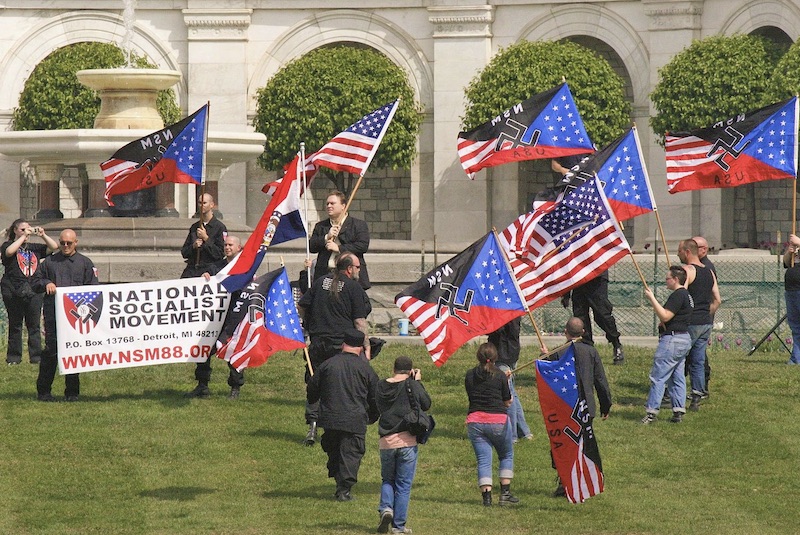 Approximately 15 armed members of the National Socialist Movement, a right-wing white nationalist group better known as Neo-Nazis, rallied in a public park in Williamsport, Pa., this past weekend and yelling racist and homophobic slurs.

The NSM members, following a short march through the park, settled on the eastern edge of Brandon Park and led a series of chants while giving speeches touting their ideology, all under the supervision of local police.

They carried NSM flags bearing swastikas laid over the American flag and wore Nazi armbands, occasionally raising their arms in a Nazi salute.

During the rally, the NSM attacked Williamsport Mayor Derek Slaughter, who is Black, for denying them a permit to rally, calling him racial slurs, reports Penn Live.

Slaughter denied the permit for the rally, just as he has for all mass gatherings due to the COVID-19 pandemic.

“The last I checked this is still the United States of America,” one of the demonstrators yelled.

The attendees also jeered and yelled a profanity-laden racial insult at a Black woman who was passing by the park.

A female member proclaimed that “God hates the gays” and led a chant yelling “Fuck the Gays!”

As the NSM members were leaving, several young people started walking toward them and yelling profanities. An NSM member told police that if they did not stop the youth, they would.

Police intervened and quickly turned the group away, without any violence.

Hostility to LGBTQ rights has become a trademark of the Neo-Nazi movement.

In 2017, when white nationalist groups rallied in Charlottesville, Va., many of the demonstrators yelled anti-gay slurs and led a chant saying “Fuck you, faggots!”

Shortly after Charlottesville, Keegan Hankes, a research analyst at the Southern Poverty Law Center, told NBC News that most white nationalists believe white people are being systematically replaced by Black and brown people and that whites are losing their grip on power.

While not all are anti-LGBTQ, a number blame the legalization of same-sex marriage for exacerbating the fact that white birth rates are not keeping pace with those of racial minorities.

“There’s this belief that basically white people are being replaced faster than they can reproduce,” Hankes said.