Home / News + Politics / Nation / Biden to HRC: “You deserve a partner in the White House”

Biden to HRC: “You deserve a partner in the White House”

Democratic nominee pledges commitment to LGBTQ community if elected, vowing to be an "ally of the light, not the darkness."

By John Riley on September 25, 2020 @JohnAndresRiley 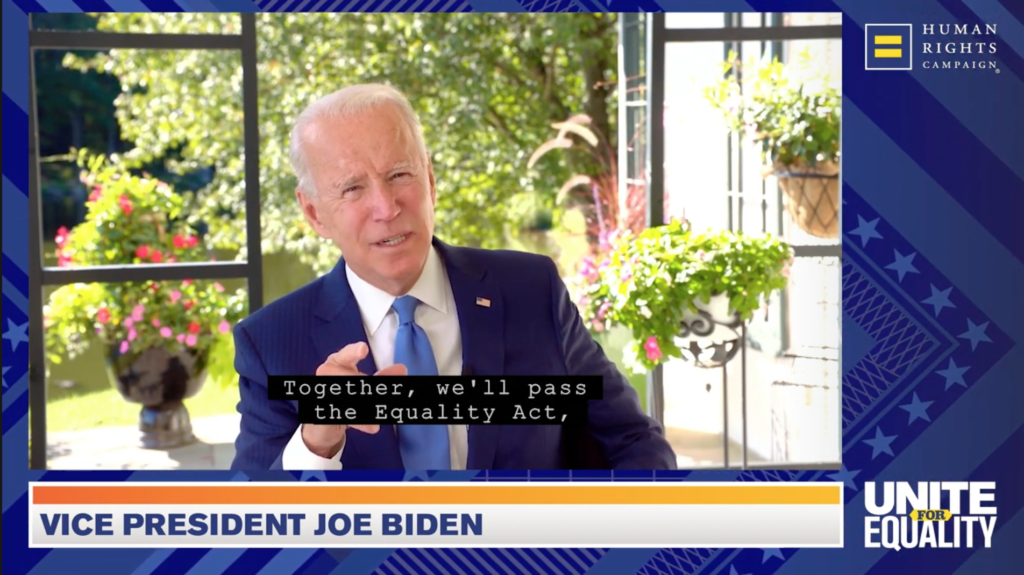 Democratic presidential candidate Joe Biden pledged his support to the LGBTQ community in a speech to the Human Rights Campaign’s “Unite for Equality Live” event, promising to be a “partner” in the fight for LGBTQ rights.

Biden, who served as the keynote speaker, thanked those logging onto the virtual call — including donors and HRC members from around the United States — for their “moral courage” and their commitment to “making things better.” He also eviscerated President Donald Trump, casting him as an unfit leader and an existential threat to democracy and the wellbeing of the LGBTQ community.

“You’ve heard me say this before, but America is at an inflection point. This election is going to determine our future for a very long time,” Biden said. “We’re facing multiple crises, pandemic, recession, racial injustice, climate change, wildfires, an assault on LGBTQ rights, declining faith in a bright American future. What’s the common thread? A president who makes things worse, not better. Who brings chaos, not order, who sees violence and only fans the flames.

“For four years, Donald Trump has tried to rollback protections for the LGBT community. denying access to health care, denying transgender Americans the chance to serve our country, letting adoption agencies and homeless shelters and other public services discriminate, turning a blind eye to the epidemic of violence against transgender women of color,” he said. “The White House should never be a source of opposition or fear or oppression. It should be a source of hope and moral courage and unification.”

He pledged to pass the Equality Act, as well as legislation to protect LGBTQ youth, expand access to health care, protect the transgender community from discrimination and violence, and to advocate for LGBTQ rights around the world, asking those in attendance to support him and work with him to achieve those goals.

“I’ll be an ally of the light, not the darkness,” Biden continued. “This time is a time of real peril. And it’s also a time of extraordinary possibilities. You deserve a partner in the White House who will fight with conviction and to win the battles ahead.”

HRC President Alphonso David, who has been among Trump’s harshest critics, emphasized the importance of voting in this year’s presidential election. Under his leadership, HRC has made significant financial investments in registering and engaging so-called “equality voters” — those for whom a candidate’s position on LGBTQ issues is influential — to vote for Biden and Democratic candidates who will advance LGBTQ rights.

Recalling an encounter he had with the recently deceased Supreme Court Justice Ruth Bader Ginsburg, a longtime ally of the queer community whose death has renewed focus on the role the Supreme Court has played in advancing LGBTQ rights, who told him to “do everything you can to protect and ensure the right to vote.”

“We need to run, not walk to the polls. Our lives depend on it,” David said. “Four years later, our democracy stands on a precipice. More than two hundred thousand people have died from COVID-19, with no vaccine in sight. And we are confronting systemic racial injustice that black and brown people have endured for far too long in this country. The decision announced yesterday in the Breonna Taylor case is just another stinging reminder. Our lives depend on what we do now more than ever before.

“If you’re thinking of staying on the sidelines, please don’t. We all must vote,” David concluded. “We need to stand tall on the principles, our principles of fairness, justice and equality. And if we do, we will shape the future of our democracy. This should be our number one priority. Let’s push for a revolution, a revolution that reflects the promise of this country. A revolution that memorializes our dreams. A revolution that includes you, includes me and includes all of us.”