Capital Pride to host “Out Brigade,” a socially distant Pride parade, on Oct. 10

Proceeds from event will benefit Capital Pride Alliance, The DC Center for the LGBT Community, and other partner organizations

By John Riley on October 1, 2020 @JohnAndresRiley 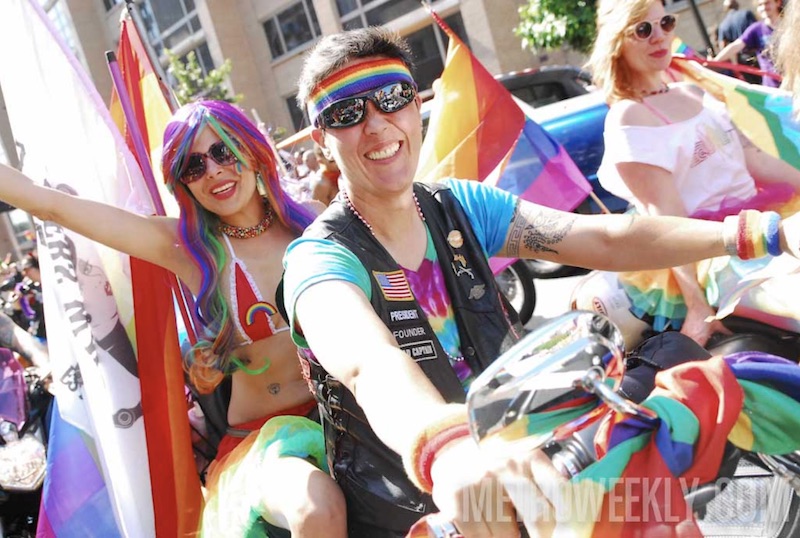 Motorcycle in the Capital Pride Parade – Photo by Todd Franson.

UPDATE: The route is slowly being revealed. See the latest updates here.

On the afternoon of Saturday, Oct. 10, the Capital Pride Alliance will host its first-ever “Out Brigade,” a socially distant Pride parade where people are encouraged to decorate their personal vehicles in bright colors, flags, and other symbols designed to show their Pride.

The three-hour-long event will feature participants, identified by Pride flags, flags representing subsets of the LGBTQ community, or Black Lives Matter flags, driving around the city and visiting checkpoints in all eight wards. Out Brigade participants also have the option of incorporating into their design symbols or flags that encourage or stress the importance of voting during an election year.

“We’ve identified checkpoints in each ward and they each have some sort of historical significance,” says Ryan Bos, the executive director of the Capital Pride Alliance. “Currently, the plan will be between 2-4 p.m., individuals have the opportunity to go to as many checkpoints as they want, based on their own schedule. And then between 3:30 and 5 p.m., the final checkpoint will be open on Third Street SW, between Constitution Avenue and Independence Avenue, where we will never videographer filming and capturing folks as they drive by.”

At each checkpoint, volunteers will check off a list of participants who registered. Those vehicles that make stops at every checkpoint will have the chance to win special prizes or awards. Due to concerns about large-scale social gatherings due to COVID-19, the Capital Pride Alliance has not yet decided whether it will make the locations of the ward-level checkpoints available to the public or just participants, in order to discourage spectators.

“We may publish the list of the checkpoints in sort of a ‘scavenger hunt’ format where we describe each checkpoint and then have folks do a social media experience to try and identify what they are,” notes Bos.

“Every registrant will get two signs, at least one of which will need to be placed on their vehicle so they can be identified as part of the brigade,” adds Bos, “but people are encouraged to create their own decorations or designs.”

Out Brigade participants have the opportunity to have their registration fee refunded if they choose to create their own fundraiser, based on the number of checkpoints they visit, in which a multi-passenger vehicle is asked to raise up to $250 and a single-person vehicle asked to raise up to $100. Up to five vehicles can band together as a “team” and collect pledges or donations, with the aim of raising $1,000 per team.

Funds raised from the event benefit The DC Center for the LGBT Community, Capital Pride Alliance, and partner organizations. Participants may also choose to “earmark” the money they raise for specific uses by designating it as for one of four specific areas, such as an events fund and an educational fund. Additional prizes will be awarded to the top personal fundraiser and the top team fundraiser.