County clerk has apologized, saying employee in question has since been disciplined

By John Riley on November 2, 2020 @JohnAndresRiley 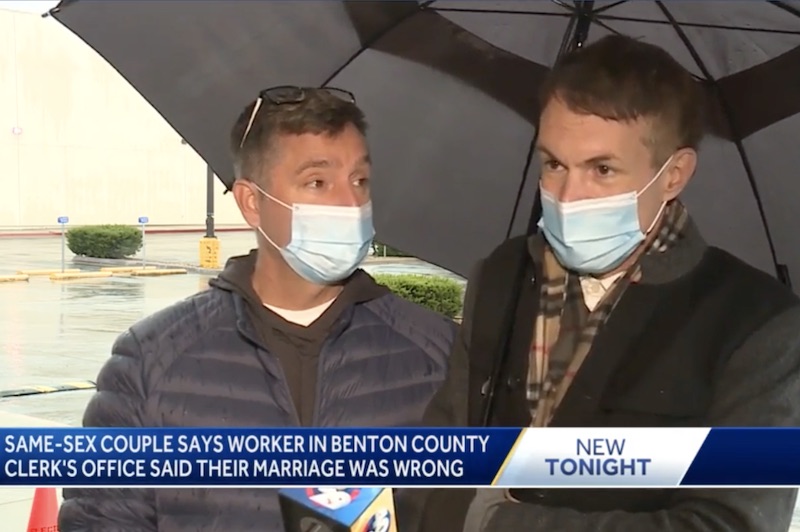 Jarrod Harms (left) and Kirk Bell say they encountered a hostile employee when they applied for a marriage license. – Photo: KHBS.

A gay couple in Arkansas say they were subjected to derogatory comments by an employee of a county clerk’s office when they tried to apply for a marriage license.

Kirk Bell and Jarrod Harms went to the Benton County Clerk’s Office last week to apply for the license, but they say that when an employee of the clerk’s office was getting their paperwork, the employee made derogatory comments about same-sex marriage, claiming that it was “wrong” and shouldn’t be “a thing.”

The employee also read out a list of Justices of the Peace who would be open to marrying the couple, and those who would decline, Bell claims.

“She chose to offer her own opinions on same-sex unions. We chose not to respond, not to engage,” Bell told Fort Smith-based ABC affiliate KHBS. “Neither of us are hurt or angry, we were surprised that type of discrimination would rear its head in 2020.”

“When those thoughts came out, I was dumbfounded. I wasn’t able to respond except to say…okay,” Harms added.

The couple later complained to Benton County Clerk Betsy Harrell about the incident, and she promised to remedy the situation right away.

“The comments made to Mr. Bell and Mr. Harms were unacceptable and do not represent the policies of my office,” Harrell said in a statement to KHBS. “I am incredibly sorry for what they experienced this week.

“When I became aware of the situation, I immediately expressed our sincerest apologies to Mr. Bell and Mr. Harms, and appropriate disciplinary action with the employee involved has been taken,” Harrell added. “Our employees are well aware of our anti-discrimination policies. Failure to treat all customers with dignity, respect, and professionalism will not be tolerated.”

Because the dispute relates to a personnel situation, details of what disciplinary action was taken could not be released publicly, according to county officials.

Bell says he and Harms simply hope that no one else will be subjected to similar treatment.

“Same-sex marriage has been federally legal for years. We just want to ensure that the proper training is done so that personal opinions aren’t warranted when someone is trying to get a marriage license,” he said. “More than anything we want to expose it and bring attention to it so that the next couple in line doesn’t have to hear those remarks.”

John Riley is the local news reporter for Metro Weekly. He can be reached at jriley@metroweekly.com
← Previous Story Georgia transgender sheriff’s deputy can sue for health care denial, court says
Next Story → Gay Democrat Jon Hoadley is running for Congress to protect his partner’s health care