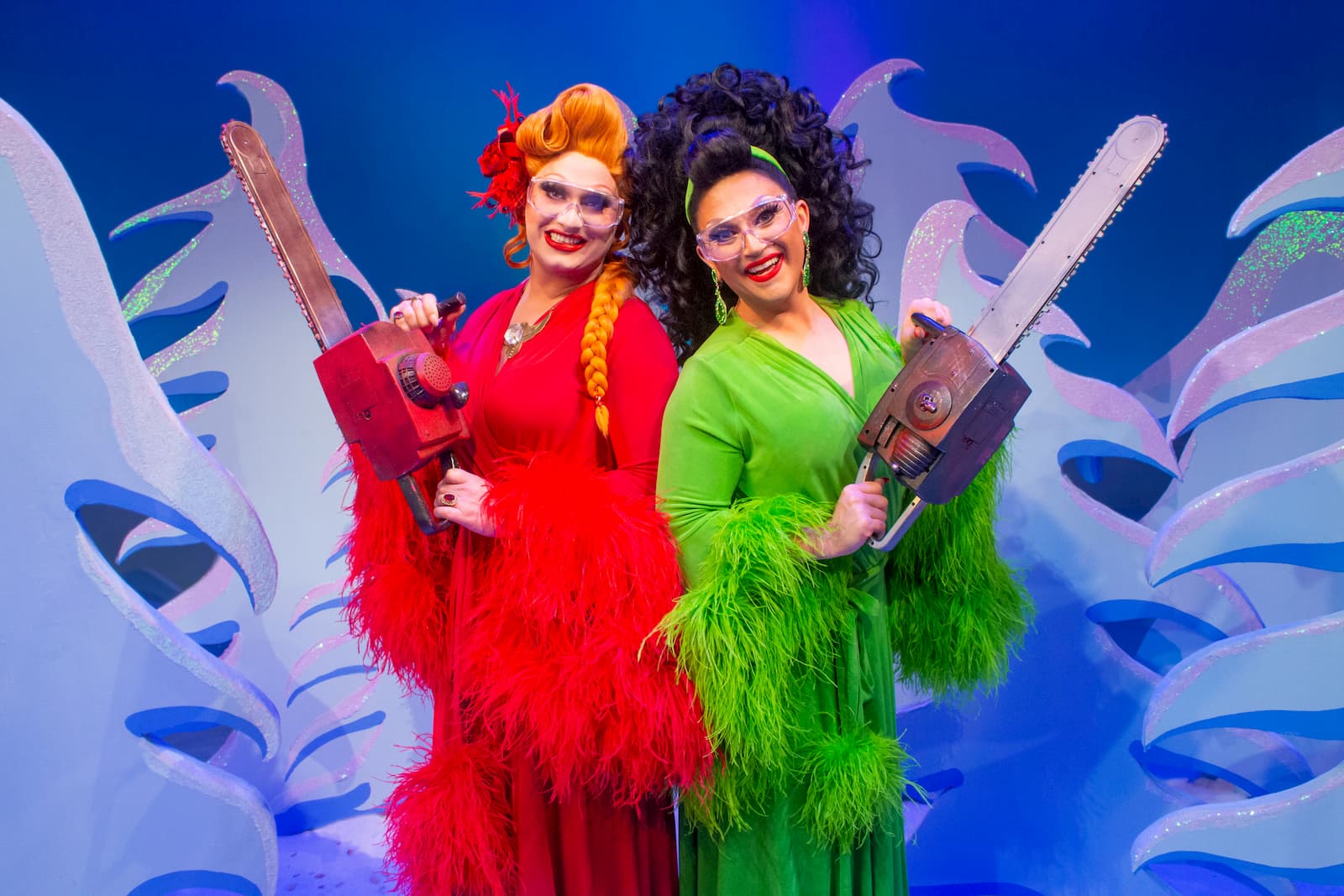 Drag superstars BenDeLaCreme and Jinkx Monsoon put camp and comedy back into Christmas with their new stocking-stuffer The Jinkx & DeLa Holiday Special. The longtime pals and RuPaul’s Drag Race alums had established their holiday show tradition in previous years with national tours To Jesus, Thanks for Everything! and All I Want for Christmas Is Attention. This unpredictable year, rather than dash their plans for a new tour, DeLa decided to produce and direct their own holiday film.

Safely shot during quarantine on a Seattle soundstage, The Jinkx & DeLa Holiday Special is “very much based on all of my favorite classic TV Christmas specials,” says DeLa.

“Going all the way back to The Judy Garland Show Christmas special, and through The Peanuts, all the way through The Pee-Wee’s Playhouse Christmas special,” DeLa continues. “It’s this tried-and-true formula of a TV star on the soundstage trying to put on a variety show. But our film takes it a step further and makes it really a story about two drag queens who are attempting to do this and just can’t get on the same page about how to do it.”

Although they can’t get on the same page in the show, the pair co-wrote the film together, and share the screen with a gaggle of guests, from dancing snow-people and Baby Jesus, to Varla Jean Merman voicing the ghost of DeLa’s dead grandmother — which speaks to her through a glass of eggnog.

Director DeLa describes the film as “this surrealist world that’s half-real and half-imaginary. And the rules are very much in that sort of cartoon, squash-and-stretch universe. But we do our due diligence to bring all of that fun, goofy, irreverent sensibility, and then really also infuse it with a lot of heart.” That applies not just to the stars and snow-people, but even to the show’s very special guest, a nameless Naked Guy (Jordan Iosua Taylor) who wakes up with Jinkx Monsoon.

“There’s always gonna be a hot, hunky, scantily clad dude in any drag queen extravaganza,” notes DeLa. “But we take that character and we make him a little bit more surprising and dimensional than one might think. And I don’t want to give anything away, but it’s all about taking those tropes and then kicking them up a notch, and making them a little more special.”

In the show, DeLa’s character obsesses about creating a holiday special to reflect the perfect family Christmases of her youth. Jinkx, on the other hand, skewers the concept of perfect Christmases with her saucy number “No One Played Santa for Me.” In fact, DeLa reveals, “there are definitely pepperings of truth in the script. DeLa talks a little bit about her past, and that is based on my past.”

“I grew up in Connecticut with a very sort of traditional, idyllic New England Christmas vibe,” she says. “My family would all get together in the picturesque farmhouse in the country with snow and the presents and the big dinner and all the rest of it, and all the family togetherness and horrible sweaters and the music and the caroling around the tree.” 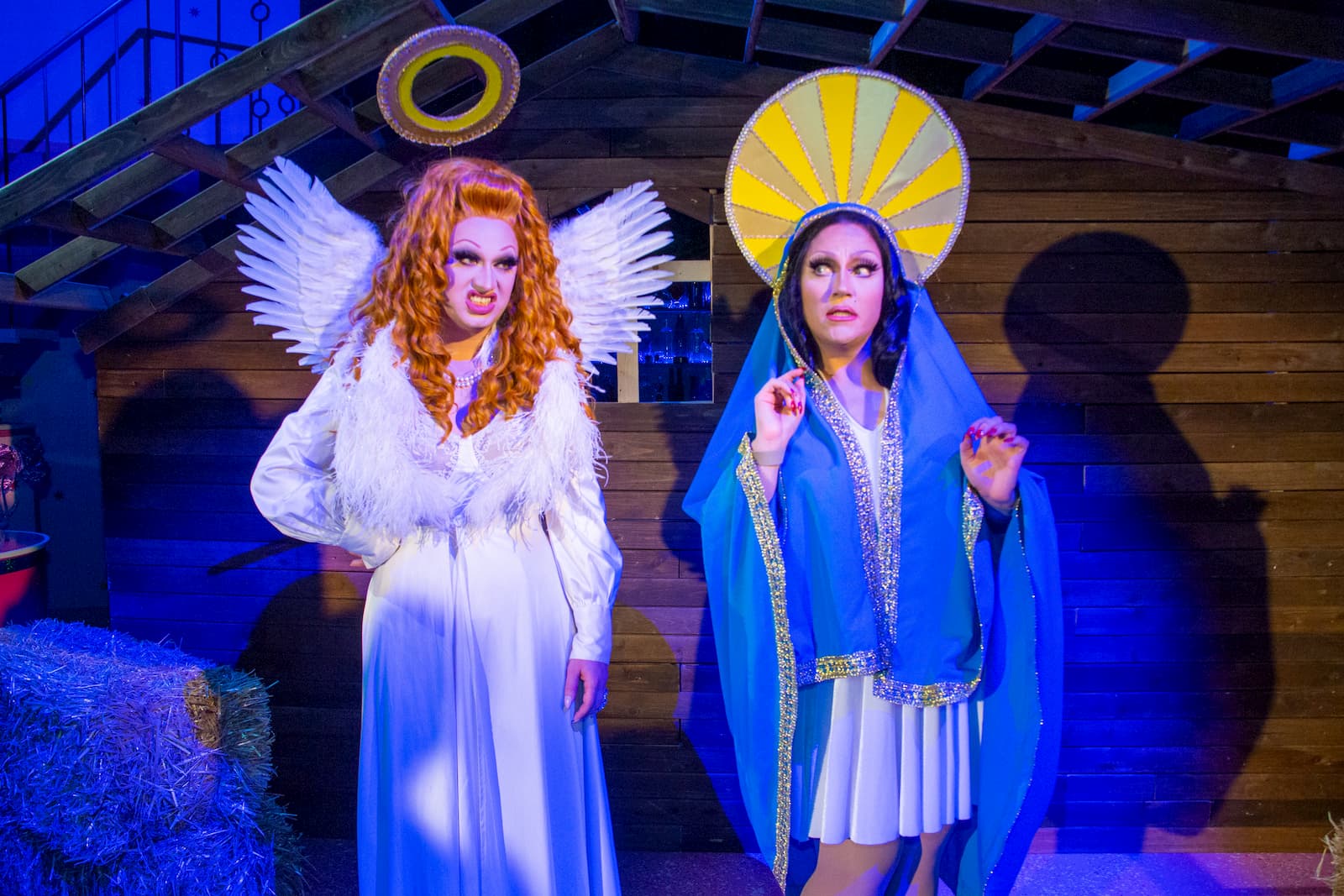 The picture might have looked from the exterior like a Norman Rockwell Christmas card, DeLa says, “but the reality is that, once I got a little older, I saw that this is really all kind of a façade. Meanwhile, it’s huge political disagreements between people at the dinner table, people not speaking to each other, people being resentful of whatever, and this kind of insane flex of consumerism and the way that gift giving becomes an exchange of power. There were so many weird dynamics that I didn’t catch as a kid, but as an adult really turned me off of Christmas.”

The performer rediscovered her love for the season, but it took a while. “It wasn’t until I started doing Christmas shows onstage about 14 years ago that it allowed me to kind of re-embrace Christmas,” she says.

“And I started doing Christmas shows literally just so I would have something I had to do on Christmas, so I couldn’t do Christmas. The reason I did Christmas shows was so that I had an excuse not to be anywhere else. But within that, I really found that by celebrating it the way I wanted to celebrate it, and with whom I wanted to celebrate, with whoever I chose to share the stage with, that that’s what became Christmas for me. And that’s what my tradition became. And that’s what made me start loving Christmas. And so really at the heart, that’s what this film is about as well. It’s about figuring out how to take things that you think maybe you have to do, and reclaim them and turn them into what you want them to be.”

The Jinkx & DeLa Holiday Special is available worldwide via VOD, and the soundtrack album is released on December 11. Visit www.jinkxanddela.com.

André Hereford covers arts and entertainment for Metro Weekly. He can be reached at ahereford@metroweekly.com. Follow him on Twitter at @here4andre.
← Previous Story Viggo Mortensen responds to criticism over gay role: ‘You’re assuming I’m completely straight’
Next Story → Francis Lee tells a powerful, personal tale of lesbian love in ‘Ammonite’