Owner wonders whether vandalism could be in protest of COVID-19 restrictions and earlier closing time.

The owners of a gay club in Oklahoma say their establishment has been targeted by acts of vandalism using food as a weapon on two separate occasions.

The first incident occurred last Tuesday, when staff at Partners, a gay bar in Oklahoma City, found a car in the parking lot that had been vandalized by having soup poured over it.

The following day, someone scattered blueberries on the walkway in front of the bar’s main entrance, with some of the berries creating a splatter pattern on the door and the doorframe.

“It was everywhere,” John McAffrey, the owner of Partners, told Oklahoma City-based NBC affiliate KFOR in an interview. “We first thought somebody got sick and then once we got closer, we realized that it was, it looks like blueberries.”

McAffrey said surveillance video caught the culprit in action, but he and his business partner don’t want to share the video until they speak with an attorney. He says the vandal was driving an early 2000s Chevy Silverado.

“They pull up, throw it out the window, slow down for probably like 10 seconds,” he said.

It remains unclear as to why the bar was targeted. McAffrey says it could be a form of protest related to COVID-19 restrictions and a local mandate that bars close at 11 p.m., but they have no evidence to confirm that suspicion just yet.

Partners has since placed a security guard in the parking lot to keep an eye out for trouble and prevent future incidents.

“It was completely childish,” McAffrey told KFOR. “There’s better ways to handle something if it is targeted at a certain individual but it’s not going to stop us for continuing and having somewhere safe for everyone in the community to come to.” 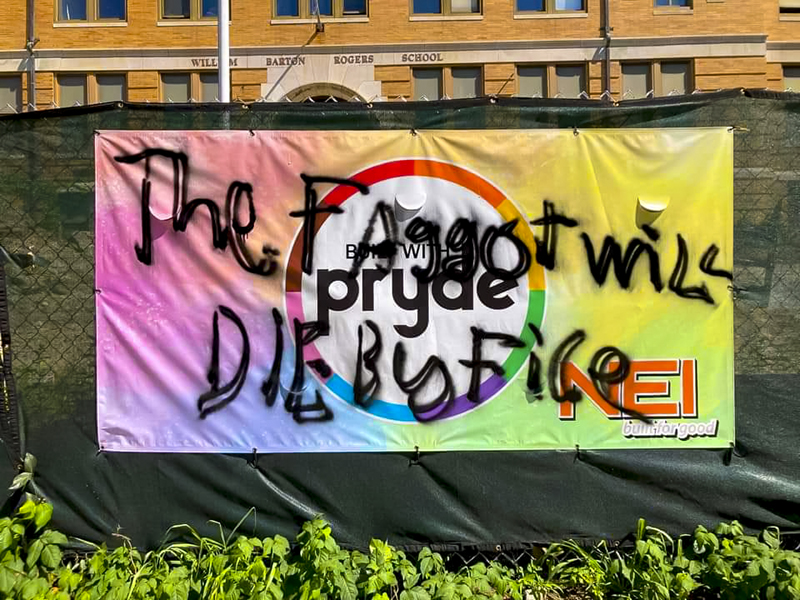 "We were heartbroken to wake up this morning to the terrible news that The Pryde was vandalized overnight with hate speech and threats spray painted on virtually every sign," the statement read. “We will not let bullies and cowards stop our work to create safe and welcome affordable housing for our LGBTQ elders. We will not let hate go unchallenged in Hyde Park."