A new study from the Williams Institute finds that queer people are six times as likely than the general population to be stopped by police, and have lower levels of trust when it comes to interacting with law enforcement.

Researchers at the Williams Institute, a think tank specializing in LGBTQ-related research, examined data from the Generations Study, a long-term study of three generations of lesbian, gay, bisexual, and queer people, and the Police Public Contact Survey, to determine their findings.

According to the data compiled from the surveys, 6% of LGBQ adults reported being stopped by police in a public space, compared to 1% of the general population.

“The much higher rates of LGBQ adults reporting being approached by the police is consistent with the idea that LGBQ people are over-policed and raises the issue of bias-based profiling of LGBT communities in general,” the report’s authors write in their summary of the data.

In particular, LGBQ-identifying women were less likely to report satisfaction with police interactions, with only 69% doing so, compared to 85% of females in the general population.

Even more concerning, one third of female LBQ adults and more than 1 in 5 LGBQ people — both white and non-white — said they would be less likely to contact police in the future due to a negative experience. By comparison, only 6% females overall, 6% of white people overall, and 7% of non-white people overall indicated a reticence to contact police in the future.

Researchers hypothesized that lower reported rates of satisfaction may point to a larger underlying issue: the lack of trust in police on the part of LGBQ people, based on the perception that LGBQ people are more likely to be targeted as suspects or that police do not take crimes directed against LGBQ people as seriously as when a heterosexual victim is involved.

They also suggested that more research could be done to study the impact of policing on vulnerable or marginalized communities, concluding: “As police reform is being discussed nationally, it is important that reforms include attention to policing of LGBTQ populations across race and gender.”

The higher incidence of negative or unsatisfactory interactions with police among LGBTQ people may be one of the driving forces behind efforts to bar police from Pride-related events, on the grounds that their presence may be triggering or discomforting to LGBTQ people, particularly those of color.

NYC Pride recently announced it plans to bar uniformed officers and law enforcement personnel groups from marching in its annual parade, and to keep on-duty officers at least a block away from any Pride-related festivities, instead choosing to rely on private security and volunteers who have received de-escalation training to deal with any problems, skirmishes, or heated confrontations.

Last year, Indy Pride announced it would no longer have uniformed officers participate in Pride, in a move intended to signal the organization’s desire to stand in solidarity with the Black community against police brutality.

Gay teacher shot and set on fire in brutal murder 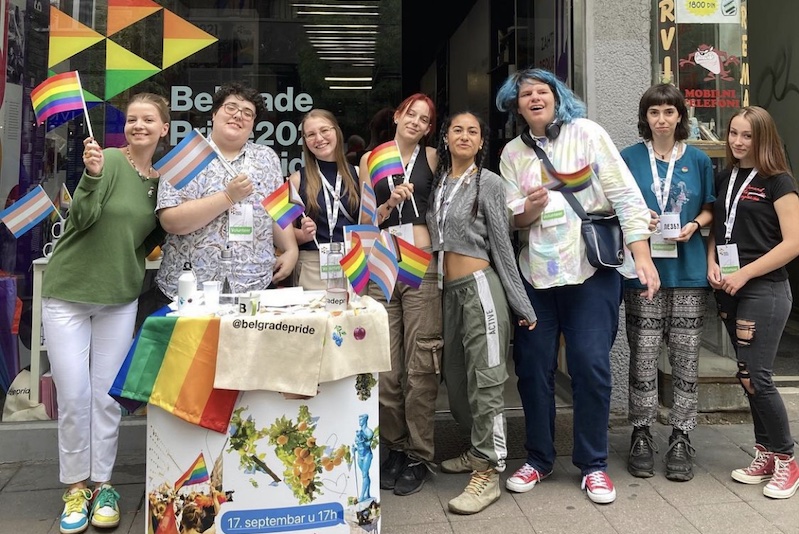 EuroPride's official Pride parade proceeded as scheduled in Belgrade last Saturday, with organizers prevailing after weeks of back-and-forth debate over whether it was safe to hold a large-scale LGBTQ march in the socially conservative country of Serbia.