Marvel’s Eternals takes an intriguing turn towards the grown and sexy but doesn’t hit the thrilling action heights of peak MCU.

The season of somber action epics marches on, with Marvel’s Eternals (★★★☆☆) joining the ranks of recent brooding blockbusters like Black Widow and No Time to Die. Sagas of weary warriors reckoning with their losses would seem tailor-made to suit the zeitgeist of our weary world. So Eternals, originally set for release in November 2020, fits right in, introducing an entire team of heroes all contemplating their purpose in a world still weathering the trauma and upheaval of a global catastrophe.

That disaster, spoken of in hushed tones throughout the MCU, is known as the Blip — half of all life in the universe, wiped out in a snap. Ultimately, the Blip was reversed, and billions of lost lives restored. But now meeting a humanoid race of super-powerful, near-immortal god-like beings called the Eternals begs the question, where were they and what were they doing when the mad Titan Thanos snapped the universe in half?

As we learn early in this origin story, directed and co-written by Nomadland Oscar-winner Chloé Zhao, the ten Eternals dwelling on earth at the time were largely estranged, some adrift, with their own reasons for not joining the Avengers’ Infinity War.

But first, Zhao and co-writers Patrick Burleigh, and Ryan and Kaz Firpo establish each Eternal’s individual identity and abilities with a swiftly paced sequence of adventures through history, kicking off in Mesopotamia, 5000 B.C. Led by their powerful psychic-spiritual center, Ajak (Salma Hayek), the group protects humanity from Deviants, ravenous beasts from deep space, who also attack in ancient Babylon and 16th-century Tenochtitlan.

That’s a host of personalities to pinpoint in somewhat limited time, and the film manages admirably, abetted by a solid cast who capture the camaraderie that bonds this group even when they’re separated by continents or centuries.

It’s the weariness of all that time spent fighting for humanity, while hiding from humanity, that weighs heavily on the hearts of some Eternals. For others, it’s the lifetime of losses, or just a lost sense of purpose — not unlike the immortal warriors in the explosive 2020 action epic The Old Guard.

The Eternals are wistful heroes, with the notable exception of Nanjiani’s impish showboat Kingo, practically the film’s only comic relief, along with Kingo’s loyal human sidekick Karun (Harish Patel). And Phastos, the MCU’s first gay superhero, ekes out a space of happiness in his undercover life with husband Ben (Haaz Sleiman) and son Jack (Esai Daniel Cross).

As with that depiction of a gay superhero, Eternals follows its characters into grown-up emotional territory. Sersi, who embarks on a succession story demanding that she assume the mantle of leadership, also works through a millennia-spanning love story with Ikaris that provides the MCU’s first bonafide sex scene. The couple’s romantic drama, played with compelling chemistry by Chan and Madden, resonates more strongly than a lot of the effects-laden superhero action.

For that, the movie too often turns to the horde of nameless, interchangeable Deviants, coldly computer-generated creatures not destined for the pantheon of great and memorable movie villains. Zhao and cinematographer Ben Davis (Captain Marvel) appear more inspired visually by the awesome flying and fighting abilities of Ikaris, depicting him surrounded by a Man of Steel-style aura of majestic light.

Still, he represents a symbol of masculine might that feels familiar, conventional, compared to the women who lead the team, or the gay dads who happen to be the only ones among the crew raising a child in this precarious, post-Blip world.

Telling an enlightened story of perseverance and sacrifice over centuries, Eternals doesn’t necessarily thrill with monumental set-pieces or clever derring-do. (For sheer comic book excitement, best to stick around for the mid-credits and post-credits scenes, which tease more Marvel superheroes soon to join the fray.)

Instead, appreciate the film for its thoughtful foray into battling celestial foes, and expanding this sprawling fictional universe with genuine feeling and an engaging sense of wonder about time and creation. 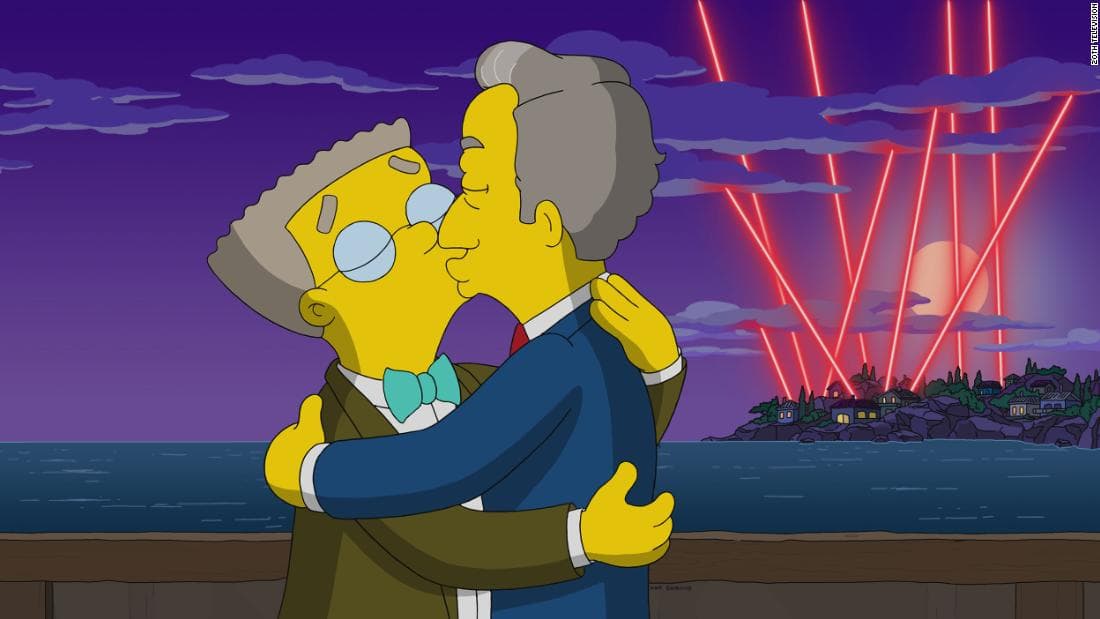 One of The Simpsons' longest-running gags across its 33 seasons is the unrequited love between Waylon Smithers and his cold, distant boss Mr. Burns.

After coming out as gay in 2016, an upcoming episode will finally see Smithers transferring his affections elsewhere -- from one mature billionaire to another.

In a teaser previewed by Entertainment Weekly, De Graaf -- alongside Homer -- meets Smithers to claim a dog and potentially negotiate an art sale for Mr. Burns' private collection.