Leonardi shared the experience on social media, tweeting, “I was SO honored to be invited to chaperone @WiltonManorsES’s field trip to the incredible Rosie’s! The students and I had a fun walk over and learned a lot about our community! A huge thank you to @RosiesBnG for hosting this special field trip every year!”

However, her joy was short-lived after backlash from conservatives on social media, who called the trip “inappropriate” and “wrong,” accused Leonardi of exposing children to “sex drugs and who knows what else,” and urged for her to be prosecuted for “child abuse.”

I was SO honored to be invited to chaperone @WiltonManorsES’s field trip to the incredible Rosie’s! The students and I had a fun walk over and learned a lot about our community! A huge thank you to @RosiesBnG for hosting this special field trip every year! pic.twitter.com/A3rpMbyUJP

Christina Pushaw, press secretary for Florida Gov. Ron DeSantis (R), weighed in on the post, tweeting, “Broward School Board member takes little kids to a gay bar on a field trip, forcing them to wear masks ‘to keep them safe.'”

Leonardi told The Miami Herald that since she tweeted about the trip, she, along with her friends and family, has been “attacked with bigoted comments and death threats.” Rosie’s has also received phone threats from area codes outside of the Fort Lauderdale area, according to one of its owners.

Leonardi said the threats have “no place in our society” and had been “referred to the appropriate authorities.”

John Zieba, one of the owners of Rosie’s Bar & Grill, told the Herald that children from the school have been coming to the restaurant for field trips for nearly a decade, learning math skills from menu prices and watching servers, kitchen managers and chefs at work.

“It’s a great experience for the kids to come in and learn how restaurants operate,” Zieba told the Herald. “Everything’s just been blown way out of proportion for ridiculous purposes.”

Broward County Public Schools released a statement on Thursday night saying that the purpose of the field trip was for students to “learn about the types of jobs involved in operating a restaurant, how to pay for their meal, and how to leave a tip for the service they receive.”

“In addition, as part of the field trip, the Wilton Manors Police Department provides traffic assistance for the students so they can see and learn about the different ways police officers support the community,” the district said.

Students also did not see the restaurant’s regular menu — which drew condemnation on social media for featuring suggestive items like the “Rhoda Cowboy” and “Miley High Club” — but instead received “a student-friendly paper menu that has three child-friendly choices.”

But DeSantis’ administration is apparently unconvinced. Florida’s Department of Education is now investigating “the situation” to “determine if there is a legally sufficient complaint,” according to spokesperson Jared Ochs.

Leonardi told the Herald that she would “continue to work hard to engage with my community, spread positivity, and represent my district on the School Board.”

“As a School Board member, I am committed to staying engaged with my community,” Leonardi continued. “I’m always proud to join classes for field trips and events, especially when our schools are connecting with the vibrant small businesses in my district.”

"I feel fantastic that we were finally able to open," says owner Freddie Lutz 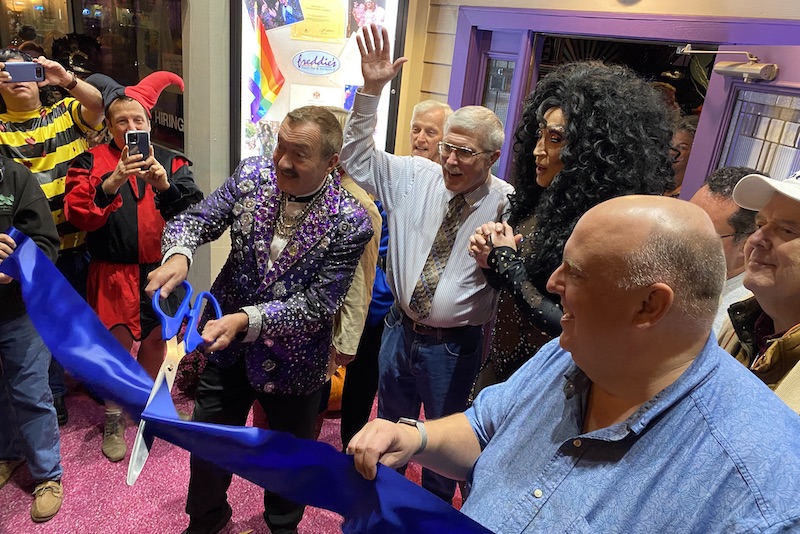 Freddie Lutz has finally realized his dream of opening a second Freddie's Beach Bar in actual proximity to a beach -- Rehoboth Beach, Delaware, that is.

"The concept really grew out of a small travel trailer that I had in Sea Air Village, which is in Rehoboth," Lutz, owner of the original Crystal City location since 2001, says. "I built a little courtyard out back, and I had a tiki bar out there with lights and an ice machine and a service bar.