Shady multinational corporation Biosyn, led by eccentric ZuckerbergMuskJobs amalgam Lewis Dodgson (Campbell Scott), is out to collect, or breed, every dinosaur specimen inside their “sanctuary” for “research.” Of course, Biosyn really is in the business of finding ways to exploit dinosaurs for profit.

Former Jurassic World executive-turned-dino activist Claire Dearing (Bryce Dallas Howard), on the other hand, aims to protect these living creatures from being used and abused. She can be found freeing a baby triceratops, unleashing seas of “Awwws” in the cineplex. Her beau, Owen Grady (Chris Pratt), also down with cause, is out riding horseback through the Sierra Nevadas, rounding up herds of parasaurolophuses for rescue.

Dominion’s action sprawls from the Western-style round-up, to the plains of West Texas, where Jurassic OG Dr. Ellie Sattler (Laura Dern, in the movie’s most engaging performance) is hunting giant locusts, to the Utah desert for a catch-up with Dr. Alan Grant (Sam Neill) at a paleontological dig.

Adding to the surfeit of subplots, loopy mathematician Dr. Ian Malcolm (Jeff Goldblum, reliably amusing), wise-cracking pilot-for-hire Kayla (DeWanda Wise), and orphaned teen Maisie Lockwood (Isabella Sermon), revealed in the last film to be a clone, fill out what feels like a tabernacle choir full of characters. That includes Blue the velociraptor, who gets her own kidnapped kid storyline.

During the climax, when the audience might expect to focus on a few or handful of heroes in jeopardy, there’s a mob of ten or eleven people racing for the exit — at least seven of whom are in no danger of dying, which deflates the excitement considerably.

And while the mission to save the dinos from Biosyn is what brings this overstuffed band together, the central plot ultimately revolves around saving Maisie. Her cloned genes could hold the key to amazing scientific breakthroughs — which might be thrilling to investigate in some venue other than a Jurassic World movie, which no one expects to be this preoccupied with human cloning.

Trevorrow does come up with one bravura dinosaur chase sequence, set in Malta, involving Claire improbably parkouring over rooftops, as Owen, on a motorbike, speeds through the narrow streets, pursued by a ravenous pack of atrociraptors. Sharply edited and photographed, the scene exemplifies the “how will they miraculously get out of this one” ethos that suffices as the one form of suspense here.

Often, the characters get out of tight spots thanks to Owen deploying his skills as an animal behavior expert, or unofficial dinosaur whisperer. But no amount of suspension of disbelief can lend credibility to the sight of Pratt wrangling raptors by just holding a hand in front of their snapping CGI jaws.

The movie ups the ante of stupid when he’s joined by two other characters, all trying to triangulate their dinosaur hand signals into one, last-ditch saving move. Dinosaurs romping on a beach are more convincing than this trio trying to halt a raging reptile by posing in front of it like The Supremes.

The production still employs persuasive practical effects and animatronic monster magic, but relies heavily on CGI elements to render its menagerie of prehistoric friends, including new dinos like the towering giganotosaurus, and giant flaming locusts. The array of savage beasts is fairly impressive, even if any accompanying sense of awe and wonder has long gone extinct. 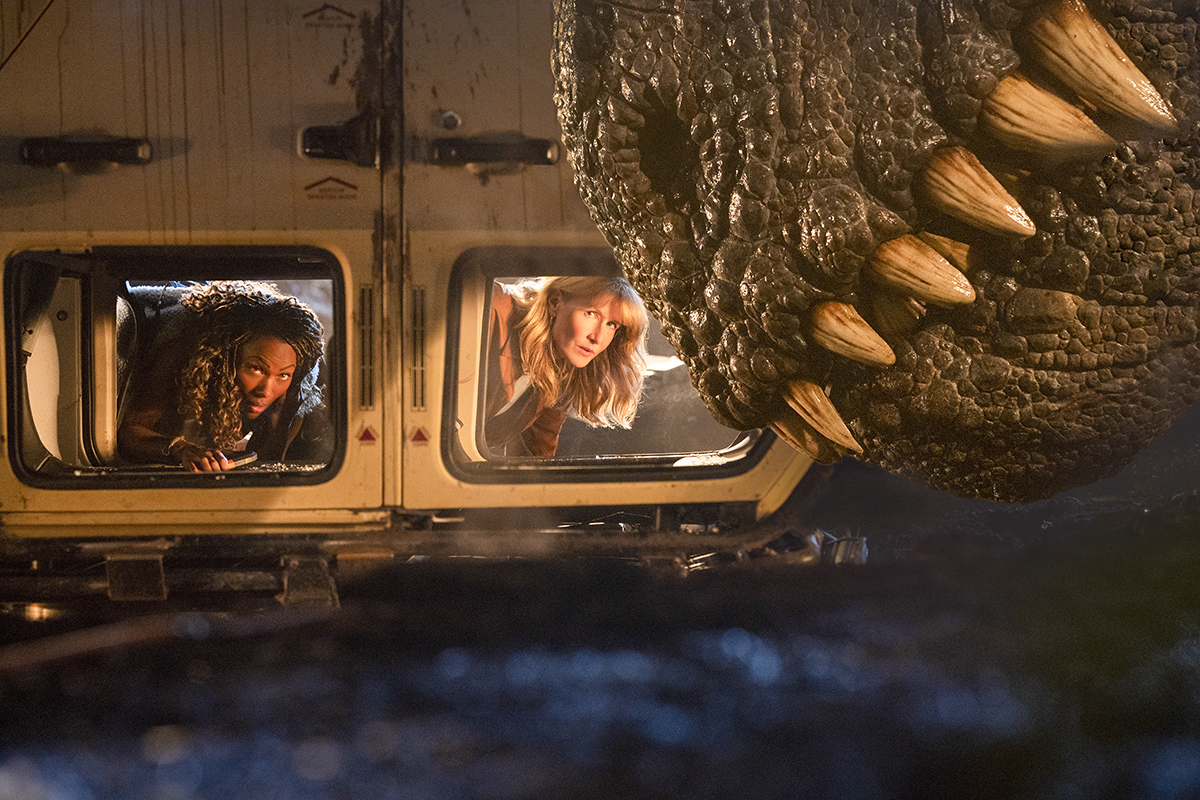