by Will O'Bryan
Photograph by Ward Morrison
September 3, 2008

The faint scent of steers and sawdust, mixed with same-sex affection, will soon waft once more across the metro area. Marking its 17th year, the Atlantic Stampede rolls into the Montgomery County Agricultural Center and Fairgrounds in Gaithersburg, Sept. 5 to 7. Along with its nearly clockwork reliability, this annual rodeo of the Atlantic States Gay Rodeo Association brings with it excitement, pageantry, entertainment, parties and a sense of homecoming.

”The rodeo is kind of like a family reunion,” says Tamara Marks, coming all the way from Nebraska to serve her second year as announcer of Atlantic Stampede. ”When I first started going, I was looking for a place where it didn’t matter if you were gay or straight or bi or whatever. I found that in my rodeo family. There’s no discrimination.”

Local favorite Destiny B. Childs, aka Ric Legg, will also be marking a return since stepping down as Miss International Gay Rodeo Association 2007. 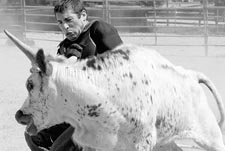 ”This will be my first rodeo since I stepped down in Denver last year,” Legg says. ”I kind of took this year off and laid back, so I’m excited. I’m really looking forward to it. A lot of people have been calling, wondering where I’ve been. Honestly, I’m looking forward to seeing all my rodeo family.”

As coordinator of the Grand Entry, a midday ceremony both Saturday and Sunday of the rodeo, Legg also has his hands full. That ceremony involves presenting officials, rodeo royalty, the national anthems of both Canada and the United States, and quite a bit more, all done to exacting IGRA protocols. Sadly, the Grand Entry also includes the Riderless Horse Ceremony to remember those in the ”rodeo family” who have died. Legg says the riderless horse will be particularly poignant this year, remembering Wayne Jakino, of Colorado, who died in July. Jakino is credited with helping to found IGRA in 1985.

While the mood at the Atlantic Stampede includes this loyal expression of mourning, the thrill of the present rules the weekend.

Legg’s alter ego, Childs, will help set the tone Thursday, Sept. 4, with a kick-off party at Remingtons, the country-western anchor for D.C.’s GLBT community. Friday is reserved for the nuts and bolts of registration — as well as another party that night — with the business of rodeo wrangling taking center stage Saturday and Sunday at the fairgrounds, including the requisite speed, roping and rough-stock events. True to its gay roots, Atlantic Stampede also offers crowd-pleasing ”camp events,” such as ”steer decorating” and the ”wild drag race.” Unique to the Atlantic Stampede and open to everyone is the ”Dolly Madison Race,” comically honoring that first lady’s mad dash in 1814 to save White House treasures ahead of the British Army’s advance.

Events added last year for kids — a stick-horse race and a piggyback-flag race — will be continued.

”Last year, we did fairly well — we had about 15 kids,” says ASGRA President Mike Sanders. ”We’re hoping for more this year.”

Attendance figures might get a boost from forecasts of fair weather. An added incentive is that, despite inflation’s toll across the board, admission prices to Atlantic Stampede have not risen this year.

But while some things remain the same, there is definitely change, too. Notably, the host-hotel site — on Capitol Hill in recent years — has been moved to the Hilton McLean Tysons Corner in Virginia.

”One of the things our contestants have consistently asked is that we look for lower room rates,” says Sanders, adding that along with lower rates, the Hilton also offers free parking. ”It’s about the same distance [from the rodeo].” Using the Beltway to bypass the District should also make the commute easier, he says.

At the rodeo itself, another change is the end of bareback-bronc riding.

”It’s one event that the IGRA marked as optional because of the cost and the injury rate,” says Sanders. ”We opted not to sponsor that event this year.”

That still leaves room for what Legg says is the most dangerous event.

”You could say bareback-bronc riding is the second dangerous,” he explains. ”After you fall off, the horse runs away. In bull riding, the bull chases after you.”

Legg and Marks share the notion that as gay rodeos continue, adding a pink hue to one of the most stalwart American icons, they may be helping to erode homophobia in hard to reach corners of the American psyche.

”I think it’s a very slow process, but there is some progress being made,” Marks says. ”In Omaha — a red state — at the IGRA Finals in 2004, a lot of our spectators were straight. We were out to educate people, and it was a huge success.”

Legg says he’s been seeing more and more straight spectators at the rodeo, especially since the release of the movie Brokeback Mountain.

”It’s really nice to see that camaraderie with the straight community, and even more straight [Atlantic Stampede] competitors,” he says.

The whole kit and caboodle winds up with a party at Freddie’s Beach Bar & Restaurant in Crystal City on Sunday night. Legg, whose drag persona Childs performs at Freddie’s throughout the year, also organized this closing, which was so successful last year, there was hardly any room for the rodeo officials.

”Most of the rodeo officials who came to the closing party had to sit — or stand, even — on the patio because there was no room,” Legg recalls. ”Now the officials will have a reserved table…. I hope everybody comes out to the rodeo and has a great old time.”

For more info on the Atlantic Stampede, visit http://asgra.org/stampede2008/index.htm. One-day rodeo tickets are $20 and are available at the host hotel or the rodeo site, daily. Tickets to either the Stampede Jamboree, on Friday, Sept. 5, or the Harvest Moon Ball, on Saturday, Sept. 6, both at the host hotel, cost $20. Full weekend passes cost $65.