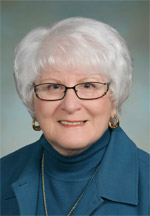 A week after calling for a public vote on marriage equality, Washington state Sen. Mary Margaret Haugen (D) has pledged to support a bill legalizing marriage equality all across the Evergreen State. Her support marks the crucial 25th vote needed to pass the Senate bill in the 49-person chamber, which is the last hurdle to passage of marriage equality in the state.

The House version of the bill already has the votes needed for passage, and Gov. Chris Gregoire (D) has said that she will sign it into law. Washington would join Massachusetts, Connecticut, Iowa, Vermont, New Hampshire and New York, as well as the District, in allowing same-sex couples equal marriage rights should the bill become law.

According to the Seattle Post-Intelligencer, Haugen serves a conservative voting district with a lot of evangelical voters — a factor she took into consideration when making her decision:

“I’ve weighed many factors in arriving at this decision, and one of them was erased when the legislation heard today included an amendment to clearly provide for the rights of a church to choose not to marry a couple if that marriage contradicts the church’s view of its teachings. That’s important, and it helped shape my decision.

“My preference would be to put this issue on the ballot and give all Washingtonians the opportunity to wrestle with this issue, to search their hearts as I have, and to make the choice for themselves. But I do not know that there are the votes to put it to a ballot measure. So, forced to make a choice, my choice is to allow all men and women in our state to enjoy the same privileges that are so important in my life.”

With two Senate Republicans and two Republicans in the House already having voiced support for statewide marriage equality before today, the National Organization for Marriage has pledged $250,000 to help unseat pro-equality Republican legislative incumbents.

Nevetherless, many businesses — including Washington-based Microsoft — have supported the state’s marriage equality efforts with Mircosoft general counsel Brad Smith saying, “As other states recognize marriage equality, Washington’s employers are at a disadvantage if we cannot offer a similar, inclusive environment to our talented employees, our top recruits and their families.”

Pro-equality state Sen. Ed Murray (D) also cautioned voters that eve if marriage equality passes the legislature, that it could still face a November ballot amendment like the state’s domestic partnership law faced with Referendum 71 in 2009.