Home / Features / To Serve, with Love

To Serve, with Love

”I collect them like baseball cards – I know all their names, I know their styles,” teases Sonya Boring.

She’s talking about drag queens. ”I’m not particularly feminine myself,” she explains, ”[but] I’ve just always been drawn to drag queens. 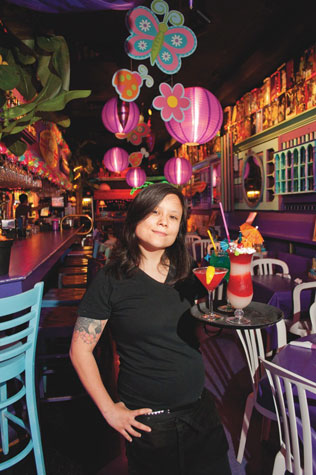 ”It takes a lot of guts,” she adds, ”to put on 10 pairs of tights and wear women’s makeup and walk up and down 23rd Street in Arlington. So I salute them.”

She also serves them – along with more common people – on 23rd Street in Arlington at the suburban drag’s gay home, Freddie’s Beach Bar & Restaurant. Boring says it’s never a dull moment at Freddie’s, and despite her name there’s certainly not a dull thing about Boring, either. ”It’s hard for people to believe,” she says about her last name. ”I’m energetic, I like to run around.”

Boring grew up living around the world as an Army brat, graduating high school in her maternal homeland of South Korea. After moving to Northern Virginia, near her parents and older brother, Boring did her own stint in the Army before taking on a job at the State Department – but nothing compares to waiting tables. And previous gigs at the Silver Diner, Uncle Julio’s and Sweetwater Tavern don’t compare to Freddie’s, where the 31-year-old has worked for a year.

”I’d bend over backwards for Freddie [Lutz] and his whole restaurant,” says Boring. Besides ”wooing women,” working at Freddie’s has also given Boring the opportunity to meet many of her drag queen favorites, including Yara Sofia and other contestants from RuPaul’s Drag Race.

Boring further appreciates the community-building nature to her job, including participating in Dining Out for Life, a popular night at Freddie’s. ”[HIV/AIDS] may not be an issue that affects me directly, but it affects my friends,” she says. ”I think as a community we need to work together.”

And then there’s the gay awareness raised by Freddie’s. ”It’s just great [hearing] people who wouldn’t normally come to a bar like this say, ‘Oh, we’re going to come back next week,”’ she says. ”The more gay people you know, the more accepting you are.

”I think we’re changing the world one Freddie’s shift at a time.”