Nile Russell was all ready to give up dancing.

”In modern dance, there were people freaking out the audience just for the sake of freaking them out, chaos for the sake of chaos,” says Russell. ”I didn’t think there was anything that was really pushing dance forward.”

In fact, Russell was preparing to become a dance teacher and leave New York when a friend dragged him to a Pilobolus audition nearly three years ago. It was love at first move. ”I had never really heard much about Pilobolus before besides the fact that they did crazy lifting and [made] all these kinds of shapes and poses,” he says. ”But I just fell in love with the vibe, the sense of community that they just doused over everything.” 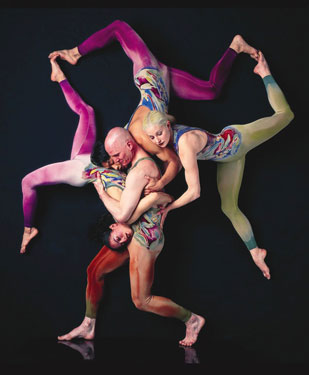 Russell is now the associate dance captain for the Connecticut-based modern dance company, known for collaborative choreography, where every company member has input, and for the master classes it often offers on tour. ”We don’t teach so much the Pilobolus technique [because] people would get hurt, we’d get sued, it’d be crazy,” he says. ”[The focus is on] the Pilobolus idea of weight-sharing, the physics of that. Not so much lifting people, but pouring your weight into them to leave the ground.”

Russell and company will demonstrate the technique next weekend, when the Washington Performing Arts Society presents Pilobolus at Sidney Harman Hall. The troupe will perform five pieces, including a new one featuring juggler Michael Moschen and another created in collaboration with the pop band OK Go.

For Russell, performing in D.C. is almost a hometown show: He grew up just up the parkway in Baltimore and was encouraged into the arts at an early age by his mother, a violinist.

”I had many shows when I was in elementary school tapping for assemblies,” Russell recalls, ”with my blue-sequined cummerbund, and blue-sequined bowtie, tapping myself off to ‘Jingle Bell Rock.”’ But Russell learned early on not to let homophobic naysayers get to him. ”I just had to live onstage – whatever was happening out there was not my concern. That was their issue. They were lucky enough to get a glimpse inside my world.”