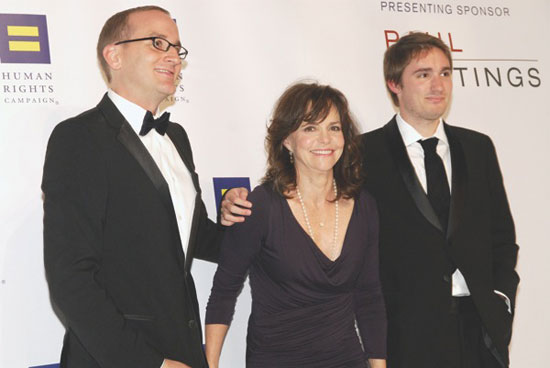 Chad Griffin with Sally Field and her son Sam Greisman

With just a month to go before the general election, the country’s largest LGBT-rights organization rallied supporters at the Human Rights Campaign’s 16th annual National Dinner on Saturday.

More than 3,000 people gathered for the sold-out event at D.C.’S Walter E. Washington Convention Center Oct. 6 to raise money for HRC’s continued efforts to support equality at the polls this November and to honor high-profile allies.

The event comes after significant victories for the LGBT-rights movement during the past four years, including the repeal of ”Don’t Ask, Don’t Tell,” increased protection for LGBT victims of hate crimes and the endorsement of marriage equality by a sitting president of the United States. This HRC dinner was the organization’s first since President Obama declared his support for marriage equality in May and since the Democratic Party became the first major American political party to officially endorse same-sex marriage in its national platform – two facts that did not go unmentioned.

Indeed, the Democratic Party’s increased support for the LGBT community was on full display throughout the evening. As the event began, guests were greeted with a montage of highlights from last month’s Democratic National Convention, noting the numerous times speakers at the convention expressed support for LGBT Americans.

It was also the first HRC National Dinner since Chad Griffin took the reins as president of the organization in June.

Griffin vowed to ”send Barack Obama back to the White House with a pro-equality mandate” this November and said out lesbian Wisconsin Rep. Tammy Baldwin (D) would also be elected to the Senate as a ”living reminder” of the broader movement.

”This is our moment,” Griffin declared.

Although the victories of the past four years were prominently acknowledged throughout the evening, the stakes of the upcoming election were also emphasized as HRC encouraged donors to keep the momentum going.

And it appears they were successful. In just 30 minutes, HRC raised around $400,000 to be used in the four states — Maryland, Maine, Washington and Minnesota — where marriage equality will appear on the ballot in November.

Among the various speakers at Saturday’s event was the Academy Award-winning screenwriter of Milk, Dustin Lance Black. Before delivering a highly personal speech to the crowd about his coming-out experience in a Mormon household, Black told Metro Weekly that the stakes in this election couldn’t be higher.

”I hope that the nation knows where these two people stand on equality because they have very, very different stances on LGBT equality,” Black said of Obama and Republican presidential candidate Mitt Romney. ”I’m not a partisan guy,” he added, ”but I’ll say I’m voting for Barack Obama because there really is no other choice if you’re interested in equality.”

Black said that a pro-equality outcome with any of the four ballot initiatives would create a very different narrative for the gay-rights movement. In the past, marriage-equality measures have typically failed at the ballot box.

It was a sentiment echoed by the headliner of the night, actress Sally Field, also an Oscar winner. Accompanied by her youngest son, Sam Greisman, who is gay, Field told Metro Weekly that the choice this November couldn’t be clearer.

”It’s only this country that could force this kind of change that needs to happen, that will happen, and hopefully in a trickle down way will affect the rest of the world forever after,” Field said. ”One of our candidates doesn’t want these human rights issues to come up,” she said, referring to Romney.

Field was presented with the Ally for Equality Award and spoke at length about her son’s coming-out experience and the need for acceptance of all LGBT children.

”You all have fought for him as surely as if you were one of his parents,” Field said to the crowd, with regard to her son. ”You’ve changed and are changing the lives of little boys and girls who realize somewhere along the way they’re just different from their other brothers and sisters. And so the fuck what?”

With that, Field brought the audience of 3,000 to their feet.

National Association for the Advancement of Colored People President Ben Jealous accepted the National Equality Award on behalf of his organization. The NAACP endorsed marriage equality in May and Jealous has repeatedly linked the fight for same-sex marriage to the struggle endured by his parents’ fight for interracial marriage.

Although no members of the Obama administration addressed the gathering – a first since Obama took office – Newark, N.J., Mayor Cory Booker delivered a rousing speech that hinted at his ambitions in the Democratic Party.

Booker has become a nationally recognized voice for marriage equality. Having co-chaired the 2012 Democratic platform committee and spoken to delegates at the Democratic convention last month in Charlotte, N.C., Booker is considered by many political observers to be a rising star in the party.

During Saturday’s speech, Booker equated the fight for marriage equality to the struggles endured by other minorities.

Booker also promised that marriage equality in New Jersey, which was approved by the state Legislature but vetoed by Republican Gov. Chris Christie, would become law one way or another. Booker also implied coyly that he might be the governor who one day signs it into law.

”When that bill is signed, I might have a very good seat for it,” Booker said to cheers from the audience. Many suspect Booker will challenge Christie in the state’s 2013 gubernatorial election.

Booker told Metro Weekly that he came down for the event to be part of a growing number of Americans demanding equality.

”We’ve got a hope mob here that’s giving me a great shot of adrenaline,” Booker said. ”To me, the urgency of this issue is just as urgent as the other issues we’re talking about this election season.”