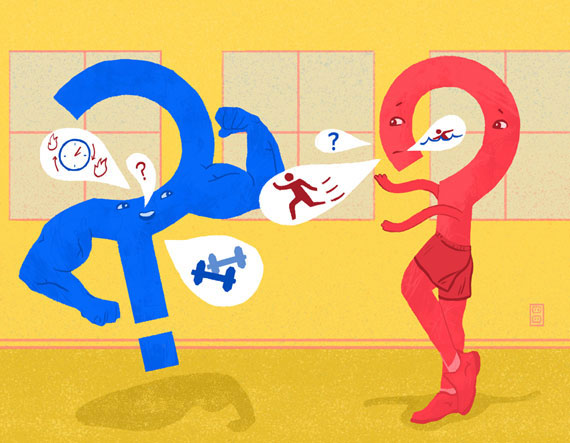 “Not again” is something I tend to think when scrolling through my newsfeed on Facebook every morning. It took a while for the social network to catch on with my family, but once it did get its teeth sunk into my mother, sisters- in-law and the rest of my family (save for my dad — he’s a stubborn man), I get to see tons of awesome posts by them.

“Repost this in 15 minutes and you will get money!” or “Repost this if you have a dog and love it!” are some of my mom’s favorites. One sister-in-law hit one out of the park with the hashtag “#MuffinTopsAreOnlyGoodForBreakfast” while heading out to train for a 10k. I got the bright idea after seeing that post to ask my family if they had any questions related to health or fitness.

The first question came from my eldest sister-in-law, the one training for that 10k: “What is a good diet or routine change-up for individuals who are in the home stretch of weight loss? I’m trying to break a plateau.”

It’s a very common question, especially because plateaus come at every stage of weight loss. They’re a strange beast, too. It’s not so much that what you’re doing stops working — it’s just working slower. Your body is trying desperately to hold on to whatever reserve energy it has. It’s an evolutionary system that’s served humanity wonderfully. You do not need to change what you’re doing, assuming you have the perseverance to keep at it. Then again, it doesn’t hurt to change, either. So, based on the idea that she’s training for a long endurance run, I told her to switch to interval training. It will spice up her routine and keep things fresh — and, hopefully, keep her dedicated. Run some hill sprints or wind sprints, or go to a spin class.

“Does running or weight lifting get rid of fat faster?”

Another fun one, from the same sister. She’s a runner, while I’m a weight lifter. We constantly get into a debate about this. At least, I think she was baiting me into one with this question. I guess when you look at someone who weight lifts, they don’t exactly look lean. Most of them are big, lumbering guys who look like they couldn’t hug a telephone pole if they tried. Runners, on the other hand, are lean, mean, aerodynamic machines — especially marathoners. But what if I told you those big guys with 18-inch arms and 46-inch chests usually have less body fat than most runners? Strange, isn’t it? Weight lifting not only burns calories, it raises the body’s resting metabolic rate. It’s constantly burning calories to repair the damage done to the muscle. I find weight lifting to be a better fat burner for me. Shots fired, Sis — your move.

My other sister-in-law is very similar to me in terms of health and fitness. A general dislike for organized team sports, a case of exercise-induced-asthma and gained most of her results through diet manipulation. (We’re similar in more ways than that, but I’m not writing my life story here.) She asked, “What are the best cardio options for people with asthma?” Maybe that’s why I never liked running, and did best with sprinting sports like hockey and football. I suffered from the same thing for many years. I wasn’t much help with this question, as I never really found one that worked for me, either. But after talking with several people and figuring out a general idea of how the asthma was triggered, it turns out swimming and long rest intervals are the best bets. Swimming keeps the air moist and helps keep the airways open, but it can be a bit of a commitment to take the plunge while you’ve got that nagging thought your airways might constrict. Long rest intervals are another option, pushing the limit on your body’s reaction and triggering of the asthma can slowly push you through it completely.

You know those times you ask someone for advice, and, as they start telling you what you should do, you think to yourself, “Why did I do this to myself?”

Asking my friends and family for their questions almost turned into that. Almost. Even though my mom is convinced I’m going to be poor and don’t love anything (based on the fact that I never repost her stuff), and my sister-in-law probably thinks I’m just an angry, antagonistic, liberal health nut, I love my family and all the crazy stuff we talk about, even health and fitness.