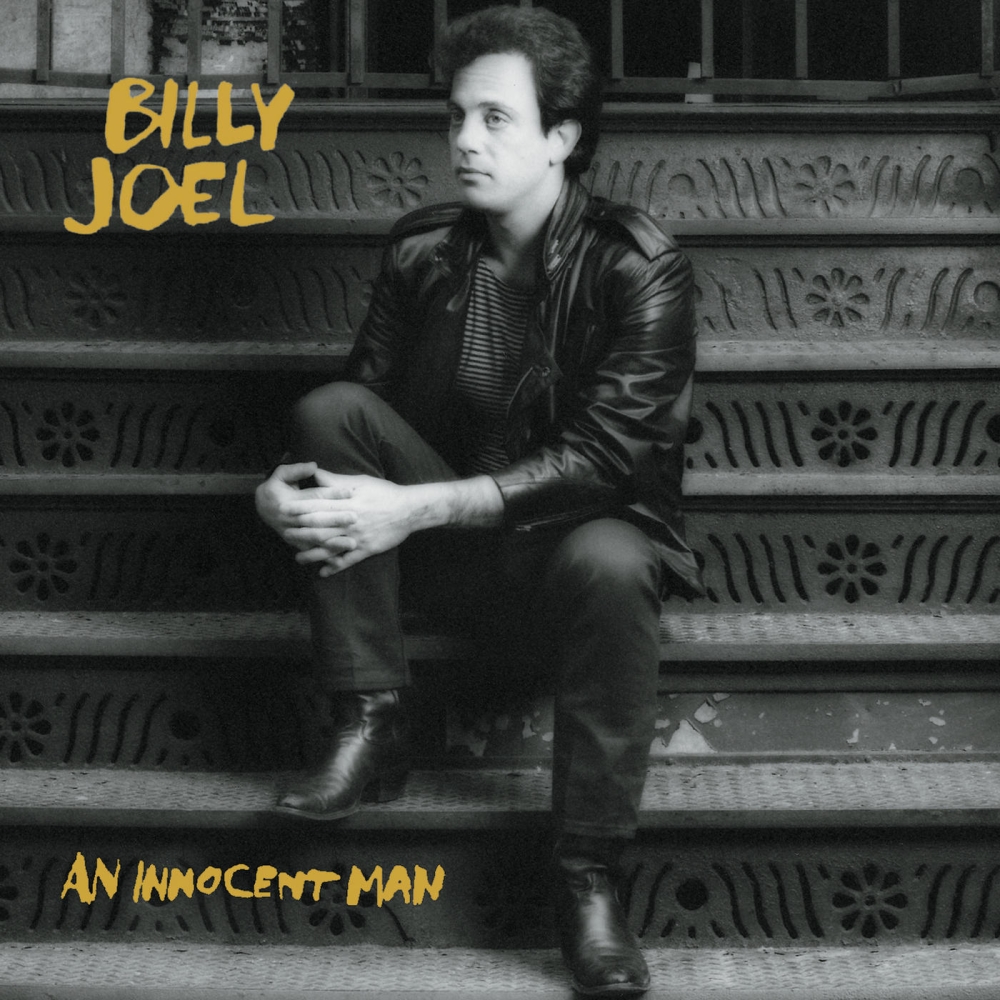 New York City-based singer/songwriter/pianist Billy Joel was a certified pop superstar by the time 1983 rolled around. He was coming off smash albums like The Stranger, 52nd Street, Glass Houses and the ambitious The Nylon Curtain. He’d been scoring hit singles since “Piano Man” a decade earlier, with some of his biggest including, “Just the Way You Are,” “My Life,” “You May Be Right,” “Say Goodbye to Hollywood,” “Big Shot,” “Don’t Ask Me Why,” “Allentown,” “Pressure” and the No. 1 smash “It’s Still Rock and Roll to Me.” For his 9th album, An Innocent Man (released 31 years ago, on August 8, 1983), Joel mined the territory of his musical youth, paying reverent homage to the different genres and artists he played religiously during his formative years as a lover of music and a musician. Such a concept could easily have descended into a collection of lazy genre exercises, but that was not the case. With An Innocent Man, Joel delivered some of the best songwriting and strongest vocal performances of his career. The album found him at the peak of his creative powers just as the increasingly important powerhouse known as MTV was able to deliver his songs to a whole new audience.

An Innocent Man was a smash from the get-go. The lead single, “Tell Her About It,” released in July, 1983, was an upbeat, swinging homage to the Motown sound, complete with soulful background vocals and a buoyant horn section. It sounds like an old Four Tops song mixed with the girl-groups that were so popular in the ’60s. Like much of the album, “Tell Her About It” seems beamed directly from the ’60, yet it still sound fresh. Supremely catchy and radio-friendly, “Tell Her About It” rocketed up the singles chart to be become the second No. 1 pop hit of Billy Joel’s career.

More hits from An Innocent Man would follow. The second single, “Uptown Girl,” became another iconic classic of the ’80s. A spot-on tribute to The Four Seasons, “Uptown Girl” features a video in which Joel portrays a working-class man enamored with a high-class girl (played by his then-girlfriend, supermodel Christie Brinkley). The clip was played heavily on MTV, helping the single shoot all the way to No. 3. “Uptown Girl” is a perfect pastiche, nailing the idiom with cocksure but charming machismo and featuring a melody as strong as any that Frankie Valli himself ever delivered. With its swinging rhythm, irrepressible joy and mischievous vibe, “Uptown Girl” is one of the best pop singles of the era and arguably the strongest track on An Innocent Man.

The album’s emotional center is the title track and third single, “An Innocent Man.” It’s a powerful piece that borrows from The Drifters’ formula during the low-key verses (as well as Ben E. King… compare it to “Stand By Me” and the musical similarity is obvious), and then swells with a cascade of piano to a powerful vocal crescendo during the chorus. Despite clocking in at an unwieldy 5 minutes, “An Innocent Man” became the 3rd straight Top 10 hit from the album, reaching No. 10.

The fourth single was the near-a cappella “The Longest Time,” a period doo-wop piece so genuine that nothing else even remotely like it was being played on Top 40 radio in the early ‘80s. Joel’s vocal parts (there are over a dozen) are mixed deftly into intricate harmonies, with a rhythm made solely of finger snaps and handclaps. It’s another irresistible slice of nostalgia served up with real verve and appreciation for the genre. “The Longest Time” made it all the way to No. 14 on the pop chart during the spring of ’84.

The sweet, soulful ballad “Leave a Tender Moment Alone,” was the next single. It peaked at No. 27. Reminiscent of old-school R&B ballads that might come from Smokey Robinson’s oeuvre, it featured a harmonica solo by the legendary Dutch musician Toots Thielemans (who’s worked with the likes of Quincy Jones, Oscar Peterson, Charlie Parker, Miles Davis, Paul Simon, John Williams and Bill Evans). The song is a tender love ballad that adds a dose of genuine romance to the mix.

The final single, “Keeping the Faith,” sum things up, as Joel refers to the past both musically and lyrically, mentioning pop culture nuggets from his youth in the ’50s and ’60s. A bouncy and upbeat R&B confection, “Keeping the Faith” became the sixth Top 40 hit from An Innocent Man, reaching No. 18. He doesn’t mythologize the past, though. The project is summed up best, perhaps, with this line from “Keeping the Faith” — “You know the good ole days weren’t always good, and tomorrow ain’t as bad as it seems.”

A one-of-a-kind album, there’s nothing on An Innocent Man that sounds like it should have been written or recorded in 1983, and it feels completely genuine. It was unlike other major smash albums of the period in that it completely eschews ’80s trappings like synthesizers and layers of keyboards. Joel is careful to be faithful to the idiom in which he works for each song, and the strength of his songwriting and his remarkable vocals (especially on those multiple layers on “The Longest Time,” his earnest reminiscences on “Keeping the Faith,” his powerhouse turn on the title track, and his brazenly mischievous “Uptown Girl”). Legendary producer Phil Ramone does a wonderful job, keeping the album from descending into trite period clichés. An Innocent Man doesn’t particularly sound like an ’80s album – it could have been released really at any point over Billy Joel’s 40-year career, and that’s the whole point. It has a timeless vibe and timeless tunes.

An Innocent Man was another smash for Billy Joel.  It reached No. 4 on the U.S. Album Chart and has sold over 7 million copies (so far) in America alone. He was also nominated for album of the year Grammy along with such luminaries as The Police’s Synchronicity, David Bowie’s Let’s Dance, The Flashdance Soundtrack, and eventual winner, Michael Jackson’s Thriller. “Uptown Girl” was also nominated for Best Male Pop Vocal Performance, along with classics like Prince’s “1999,” Lionel Richie’s “All Night Long,” and Michael Sembello’s “Maniac.” They all lost to Michael Jackson’s “Thriller.”

The album was also a massive success worldwide, hitting the Top 10 across the globe. It was arguably the peak of his success. He’d go on to record smash albums like The Bridge, Storm Front, and River of Dreams (and he’d even have another No. 1 on the US singles chart with 1989’s “We Didn’t Start the Fire”), but he’d never again reach the sales figures and have as many hits from one album as An Innocent Man.

An Innocent Man is such an obvious part of the fabric of ’80s music that it sometimes gets overlooked when talking about the great records of the decade – and it shouldn’t. Pick it up and rediscover it. A remastered CD was issued in the late ’90s, and for vinyl enthusiasts there is a 2010 release of the album as part of the 180 Gram Audiophile Series — it’s one of those albums that was made for vinyl. An Innocent Man bridges the gap between past and present with real heart, wit and enthusiasm. As Joel sings on “Keeping the Faith,” “Oh, I’m going to listen to my 45s… ain’t it wonderful to be alive when the rock ‘n’ roll plays? When the memory stays? Yeah!  I’m keeping the faith!”  Hells, yeah.