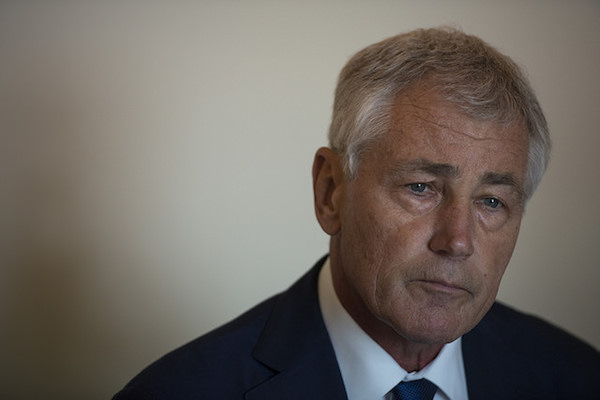 More than three months after Defense Secretary Chuck Hagel and the White House voiced support for a review of the military’s ban on transgender service, a new report finds the Pentagon could immediately open the armed services to transgender Americans in a way that is consistent with military readiness and core values.

According to a nine member commission consisting of three retired U.S. military generals and convened by the Palm Center, “formulating and implementing inclusive policy is administratively feasible and neither excessively complex nor burdensome.” The report released Monday outlines ideal administrative practices for adopting an inclusive policy while maintaining readiness, as well as offering administrative guidance to help the military prepare for the “inevitable updating of current policy” in 14 areas concerning transgender military service, such as gender marker changes, privacy and nondiscrimination statutes. Those recommendations were drawn from the experiences of 18 foreign nations that allow transgender personnel to serve openly as well as experiences with integration of groups previously excluded from the U.S. military.

In a joint statement, the three retired generals on the commission — Major General Gale S. Pollock, former acting Surgeon General of the U.S. Army; Brigadier General Clara Adams-Ender, former Chief of the U.S. Army Nurse Corps; and Brigadier General Thomas A. Kolditz, a Yale University professor and Professor Emeritus at the U.S. Military Academy at West Point, where he led the Department of Behavioral Sciences and Leadership — said the report demonstrates there is no reason for delay.

“We spent three months serving on a research commission that investigated administrative aspects of transgender military service, with a view toward maintaining readiness and alignment with core military values of dignity and respect,” the generals stated. “Our conclusion is that allowing transgender personnel to serve openly is administratively feasible and will not be burdensome or complicated. Three months have passed since Defense Secretary Hagel announced a willingness to review the military’s ban on transgender service, an effort the White House indicated it supports. Our new report shows that implementation could proceed immediately and will be successful in its execution.”

Although gay, lesbian and bisexual Americans have been able to serve openly since the repeal of “Don’t Ask, Don’t Tell” (DADT) in September 2011, with no negative consequence, a medical regulatory ban still prohibits transgender military service. But unlike DADT, the ban is not a federal statue and the ability to lift it lies not with lawmakers on Capitol Hill, but leaders at the Pentagon. While implementing an inclusive policy would require effort and resources, the report notes that discharging members of the military for being transgender does as well. An estimated 15,500 transgender personnel currently serve in the armed forces.

The report comes as the movement for transgender military service gathered increased momentum after Defense Secretary Chuck Hagel told ABC News’ Martha Raddatz in an interview that aired May 11 that the military’s transgender ban should be “continually reviewed” and stated he is open to such a review. “I go back to the bottom line — every qualified American who wants to serve our country should have an opportunity if they fit the qualifications and can do it,” he said. “This is an area that we’ve not defined enough.”

During a flight en route to Saudi Arabia a few days later, Hagel expanded upon his remarks, stating that the Pentagon should continue to evaluate the ban. “I’ve not asked for a specific task force,” he said. “I’ve not asked for a specific study. I would want to hear more from individuals who are close to this issue, know this issue, who I would value their judgment and their direction on.” And then on May 16, the White House signaled their support for such a review. “I would certainly point you to what Secretary Hagel said and we certainly support his efforts in this area,” White House press secretary Jay Carney said in response to questions from Metro Weekly. Such statements illustrate a dramatic shift in tone by the Pentagon and Obama administration on transgender military service, but according to Pentagon spokesperson Lt. Cmdr. Nate Christensen, no review has yet been ordered. The White House declined to comment for this article.

Shannon Minter, legal director of the National Center for Lesbian Rights and co-chair of the commission that authored the latest report, said evidence is mounting for the Obama administration to act.

“In an earlier study, the former US Surgeon General, along with retired General and Flag Officers, concluded that transgender personnel are as fit to serve and as ready for deployment to austere environments as anyone else,” Minter said in a statement. “It is essential for the Department of Defense to begin to review its ban on transgender military service now, and to replace it with fully inclusive policy. Today’s report provides a comprehensive roadmap of the steps that are needed for the full implementation of an inclusive approach, and further establishes to the Administration that a new policy will be successfully executed.”

Allyson Robinson, policy director of Service Members, Partners, Allies For Respect and Tolerance For All (SPARTA), told Metro Weekly that the report demonstrates what SPARTA’s 250 actively serving transgender members have always known: “there is no justification for DoD’s obsolete regulations and no reason not to update them immediately.” Moreover, Robinson said the speed at which the Pentagon reviews and revises such regulations ultimately depends on one man.

“Secretary Hagel has stated he supports a review of the regs; when I last checked, the decision to initiate that review was his to make. It’s time for him either to do so, or to state why he won’t,” Robinson said in an email. “It’s time for him to lead.”

The report is the second in a series commissioned by the Palm Center at San Francisco State University evaluating transgender military service as well as questions related to readiness, morale, welfare, personnel requirements and management. The first, released in March, found no compelling medical rationale for banning transgender people from serving in the American military.

The Palm Center’s Transgender Military Service Initiative was launched in 2013 after $1.35 million grant from the Tawani Foundation, which was founded by Jennifer Pritzker. A retired lieutenant colonel who served 11 years in the Army and 16 years in the National Guard, Pritzker became the world’s first transgender billionaire when she came out last September.

The commission concludes that allowing transgender Americans to serve would reflect “the core values and principles that all military personnel should serve with honor and integrity; all persons capable of serving their country should be allowed to do so unless there is a compelling reason for prohibiting their service; and the military should not needlessly separate personnel who are willing and able to serve.” Moreover, the military would “better live up to its ideal of reflecting the diversity of the nation it is responsible for defending.”