Arena’s Fiddler on the Roof and Studio’s Bad Jews, reviewed

Arena's Fiddler is a revelation, while Studio offers up some acerbic Bad Jews 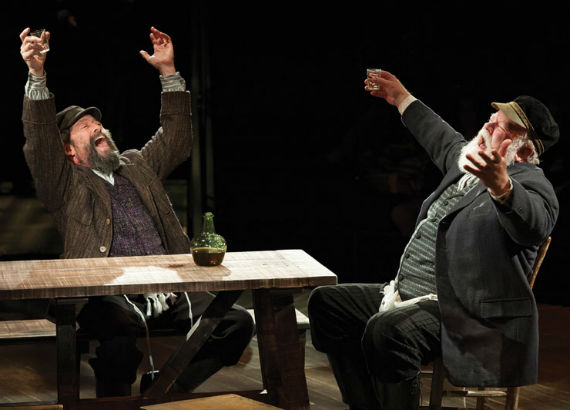 Fiddler on the Roof is the type of musical that generally divides people into two camps. On one side are those who grew up with the show and have seen so many productions it might take a miracle from God — or at least a nightmare portending grave consequences — to convince them to see yet another one. And then there’s the decidedly non-Jewish camp, people who might be familiar with the show and might even love a couple of the American Songbook standards that derive from it, such as “If I Were A Rich Man” and “Sunrise, Sunset.” To see a production of the show in 2014, though, seems a little retrograde. Isn’t it old-fashioned and out-of-date?

In a word, no. Oh sure, you may have questioned the relevance as recently as a few years ago when the last national tour of the show came to town, starring Harvey Fierstein — who, to be fair, was a hoot as Tevye. But you won’t question why Molly Smith has revived it now. Arena Stage’s new 50th anniversary production of the show by Joseph Stein, Jerry Bock and Sheldon Harnick is an out-and-out revelation. This show, of all shows, seems custom-made for the in-the-round Fichlander Stage. For starters, peering down on the huge, 28-person cast, regularly coming and going in four directions, you get a real sense of the energy of a village such as Anatevka, the small, tight-knit Jewish community in Russia portrayed in the show.

I could go on — and I will — but you don’t just have to take my word on this. After last week’s opening night performance, the show’s lyricist Sheldon Harnick, who earlier that night was honored with the company’s American Artist Award, took to the microphone not once but twice to heap praise on Smith’s production. You could tell he was as genuinely impressed as any theatergoer will be by choreographer Parker Esse’s decision to have Fruma-Sarah (a terrifically terrifying Tracy Lynn Olivera) rise from the dead and through the bed, suspended in mid-air, promising retribution if Tzeitel (Dorea Schmidt) marries her widowed husband Lazar rather than her true love, the lowly tailor Motel (Joshua Morgan).

On the other hand, the 90-year-old Harnick sees several productions a year of his most famous work. Perhaps he even lauds each one after the fact, expressing, as he did at Arena, his wish that his co-collaborators were still alive to see it. On the other hand, he added that while most shows that follow Jerome Robbins’s original choreography get the steps right, they don’t often have the emotional resonance that Robbins was going for. This “superb production” did, he said.

It’s not only Smith’s overall direction and Esse’s adapted choreography that will reward any journey to see this show. Jonathan Hadary leads the stellar cast, portraying Tevye the Dairyman as a charismatic, profoundly decent everyman who you can’t help but admire and respect, even if you sometimes disagree with his beliefs and decisions — steeped in tradition but somewhat adaptable as circumstances warrant. And, ultimately, it’s the struggle between tradition and modernity that makes Fiddler still relevant today — especially when it’s presented as realistically and universally as it is at Arena Stage. It’s hard to imagine anyone walking away and not answering the show’s sweet, hilarious love song, “Do You Love Me?” in the affirmative. 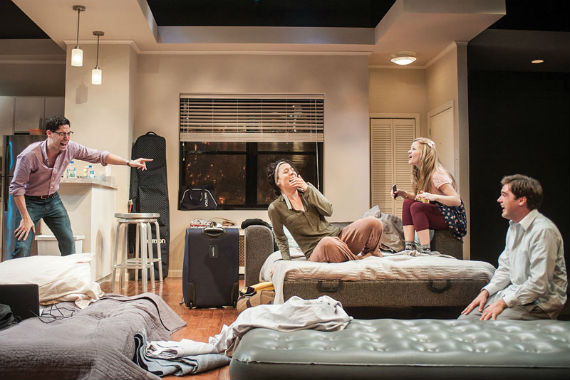 YOU WON’T LEAVE STUDIO THEATRE WITH QUITE as warm a feeling after taking in the new play Bad Jews — which is not to say Joshua Harmon’s acerbic dramedy won’t be to your liking. It’s just, well, none of the four characters here are lovable. They are, in fact, as the title would have it, all bad, to varying degrees — though only three of the four are Jewish, cousins reunited for their grandfather’s funeral. The fourth, Melody (Maggie Erwin), is an especially clueless, joyous goy, a Barbie doll girlfriend who has a genuine heart — but an underused mind.

To a certain extent, Bad Jews, assuredly directed by Serge Seiden, is a thoroughly modern, millennial rendition of Fiddler, exploring similar themes about the role of culture and religion in modern-day life and love. Though, in both its structure and presentation, it might also remind you of that ferocious classic Who’s Afraid of Virginia Woolf? Irene Sofia Lucio as Daphna and Alex Mandell as Liam both turn in astonishing performances as the show’s two tentpole monsters, one an Israeli-dreaming Jewish hardliner, the other a thoroughly assimilated American atheist. Peace and goodwill between these two is as impossible to imagine as it is between Israel and Palestine.

Fiddler on the Roof (

Doug Rule covers the arts, theater, music, food, nightlife and culture as contributing editor for Metro Weekly. Follow him on Twitter @ruleonwriting.
← Previous Story Fiddle Me This
Next Story → Little Dancer at the Kennedy Center (Review)