Uses Kickstarter to raise funds, with units selling out in hours 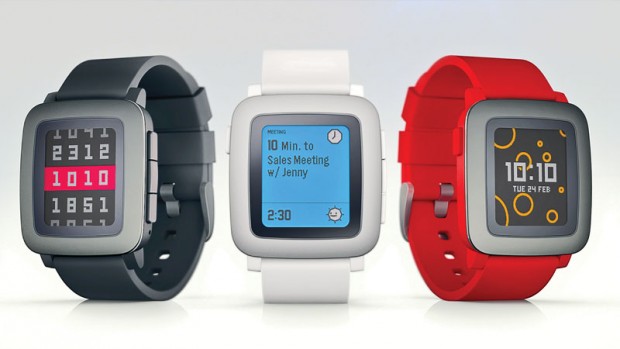 In the past year, the battle for technological supremacy has gotten ever more granular, with companies expanding into new and daring product lines in an attempt to create “the next big thing.” Nowhere is this more apparent than on your wrist. Most major tech companies (and many with little prior experience in gadgetry) have some form of product designed to be worn on one’s wrist, whether to complement or replace a traditional watch. From fitness trackers, to smart watches, to health monitors, if you want to wrap tech around your arm, there are a myriad of ways to do so.

In the smartwatch camp, there are four main players. Samsung offers several devices, none particularly fantastic, in a variety of shapes and sizes, with cameras, advanced screens, motion tracking, health monitoring and all sorts. They’re designed to complement or even replace your phone. Some run a custom software called Tizen, others ran a forked version of Android, one operates on Google’s platform, Android Wear. Indeed, that latter system is the next major player. Google has taken a big step into wearables with Android Wear, with smartwatches designed to complement your phone, letting you interact with notifications, respond to messages, perform simple searches, monitor your fitness stats and a host of other simplified tasks. Wear is clean, minimalist, and comes on a variety of devices, with screens both square and circular. Apple is the third major company, an arguably commands the most mindshare in the smartwatch space — which is impressive, given it’s yet to launch the Apple Watch. When it does land, it’ll bring a custom version of iOS, deep app integration, a rotary dial input method, and voice commands and audio responses. It’ll also be ludicrously expensive — it is Apple, after all.

What of the fourth player in this ecosystem of smart timepieces? You may have heard of them, you may have even spotted their devices on the wrists of those who love them. For a few years now, Pebble has been making a name for itself as the current smartwatch king. As Google, Samsung and Apple battle over specs and flashy gadgetry, the folks at Pebble have focused on two main features: battery life and usability. Where most competitors struggle to make it through more than two days of use, a Pebble smartwatch can last a week between charges — and that’s with an always-on display. With its monochrome e-paper screen (like that found on Kindles) and simple, button-based input method, the Pebble smartwatch can tell the time, show notifications from your smartphone, and otherwise remain unobtrusive in your daily routine. When it launched on crowdfunding site Kickstarter in 2012, it reached its funding goal of $100,000 in two hours, and at the time was the most funded project ever, eventually reaching $10.3 million dollars in the month it was available to back. 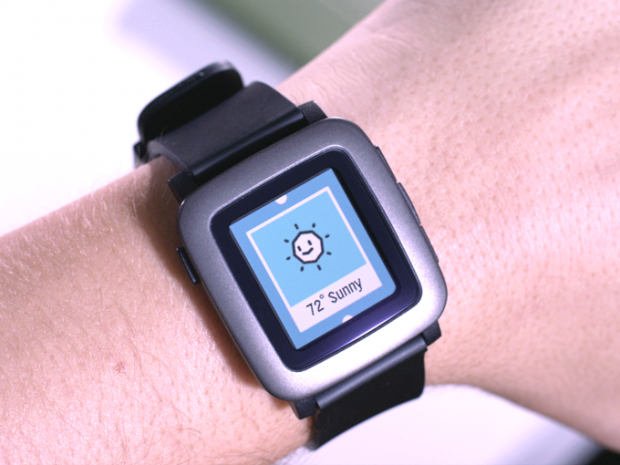 Since then, they’ve not seen fit to mess with the Pebble’s winning formula — at $99, it remains the top selling smartwatch on Amazon. Last year, Pebble introduced the Steel, which swapped the bright plastic casing of the original for a slimmer, sleeker steel design and a higher price. Since the original first hit stores, over 6,500 apps have been developed for the platform, Pebble watches can receive Android Wear notifications, and the company has secured at least $15 million in traditional funding to keep producing its watches.

What’s next then, for Pebble, in the face of stiffer competition from Android Wear and, imminently, Apple? Well, the company returned to where it all started and announced in a new Kickstarter project the Pebble Time, its first color e-paper display smartwatch.

Color e-paper displays have existed for several years now, but are still relatively scarce in consumer electronics. The drawbacks compared with traditional LCD or OLED displays are apparent — lower resolution, framerate and brightness — but on a tiny smartwatch display, which isn’t used for consuming media, those foibles are less apparent. Instead, even with the switch to color, Pebble is still able to boast of up to a week’s worth of battery with the Pebble Time — and that’s with an always-on display. As the owner of a Moto 360, which panics when it’s away from its charger for more than a day, it’s a luxurious amount of time to spend untethered to a wall socket.

Wrapped around that new screen is a slimmer, more premium body. The Time sheds twenty percent of the original’s size, and swaps plastic for a stainless steel bezel and polycarbonate body. The display is coated in Gorilla Glass, the casing is curved to better fit the wrist. Ergonomics were key, but convenience remained — bands are the standard 22mm width, and the Time has a quick-release toggle to make swapping between them a simple process. In addition, water-resistance is retained, with Pebble promising it will work in all conditions (just don’t engage in any deep-sea diving and you’ll be fine).

Usability has vastly improved, thanks to a new software platform called Timeline. The watch lays out notifications, reminders and events chronologically, letting users navigate back to a missed email, check what song is currently playing on their phone, or look ahead to their next meeting, for instance, all in one easily-browsed, vertical list. It removes the need to launch separate apps for each process — such as a weather app to check the forecast, or a stocks app to check on the NASDAQ — though, the option to do so remains, and the Time is compatible with every app and watchface available in the Pebble store.

Interaction is handled via buttons on the side of the watch — there’s no touchscreen here — though they’re complemented by voice interaction, which is a first for Pebble’s watches. Unlike Siri or Google Now, you won’t be asking your Time to check your calendar or show your steps for the day. Instead, it’s used to respond to notifications. Get an email from work? Speak your response and either have the Time convert it to text, or send the audio file instead. Similarly, you tell your Time to set basic reminders, or leave voice notes for yourself for later. Of course, given that Pebble makes its APIs available to developers, there’s nothing preventing app makers from building deeper voice integration into their Pebble apps.

At the time of writing, the Pebble Time Kickstarter is another roaring success for the company. It smashed through the $1 million mark in just 49 minutes, and has now passed $5 million in pledges. The Time will retail for $199 when it launches in May, though it was available for just $159 to the first 10,000 who backed the project (those units disappeared within the first couple of hours). It comes in either white, black or red, with a corresponding silicon strap.

For the hundreds of thousands who own and enjoy Pebble watches, the Time represents a significant upgrade. Compared with the relatively simple original Pebble and high-quality Steel, the Time adds new features, new methods of interaction and, of course, life in glorious color. That it does this while retaining water resistance, losing weight and lasting without a charge for a week is testament to the design capabilities of Pebble as a company — which has come on leaps and bounds since it launched its first watch as a concept three years ago.

At a time when the smartwatch world seems to be dividing into two camps — Google and Apple — it’s reassuring to know that Pebble is continuing to innovate on their product. That the Time (and, indeed, all Pebble watches) works with both iPhone and Android devices, and outlasts anything from Cupertino or from Mountain View’s hardware partners, should give more than a few people pause to consider a Pebble smartwatch. Just make sure and act fast — at this rate, Pebble’s initial production batch will be exhausted pretty soon.