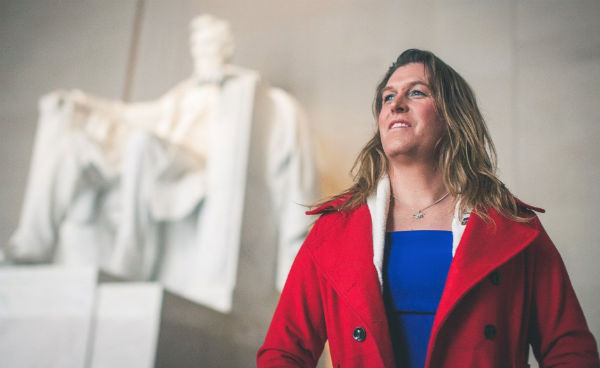 Kristin Beck, the transgender Navy SEAL and a candidate for Maryland’s 5th Congressional District, got her own jab in at former Arkansas Gov. Mike Huckabee after his comments regarding transgender military personnel in last Thursday’s GOP presidential debate.

In the debate, Huckabee was asked a question about allowing transgender members of the military to serve openly, at which point he went on a mini-rant against paying for gender confirmation surgery.

Beck posted an open reply to Mike Huckabee via her Twitter account, featuring two pictures, one of her during her time in the Navy when she was previously known as Christopher, and another of her now, adorned with medals she earned while in combat.

She tweeted: “@GovMikeHuckabee I was the best of the best #NavySEAL … I am twice the man you will ever be! #GOPDebate.”

Beck, who has filed paperwork with the Maryland Board of Elections to run in the Democratic primary for the seat of U.S. Rep. Steny Hoyer (D), the House’s second highest-ranking Democrat, has been an advocate for open transgender service. Huckabee, who has sought to enhance his appeal among evangelical and socially conservative voters, has previously made comments ridiculing transgender individuals, cracking jokes at the National Religious Broadcasters Convention about how he wished he had been able to claim he had gender dysphoria in order to be able to shower with girls in his high school physical education class.

“For those who do not think we are under threat, simply recognize the fact that we are now in city after city watching ordinances say that your seven-year-old daughter, if she goes into the restroom cannot be offended and you can’t be offended if she’s greeted there by a 42-year-old man who feels more like a woman than he does a man,” Huckabee told convention-goers back in February.