By Randy Shulman on September 3, 2015 @RandyShulman

Paul Weitz is still atoning for the sin of concocting the sight of Jason Biggs inches-deep in an apple pie. Weitz’s American Pie was the Porky’s of its generation, a hormonally-charged coming-of-age film that was little more than sex on a shtick. But it gave Weitz a career and he’s been trying to distance himself ever since, striving instead for warm, gently funny, human-scale stories. His best attempt remains 2002’s About a Boy, a graceful comedy elevated by knock-out performances from Hugh Grant and Nicholas Hoult.

), Weitz continues down the path to redemption, but doesn’t quite make it all the way. Saddled by a slight plot comprised of small, intermittently entertaining set-pieces, the comedy plants social causes on its sleeve — and then keeps said sleeve rolled down and firmly buttoned.

When pregnant teenager Sage (Julia Garner) approaches her grandmother to assist in help getting her an abortion, a day-long road trip ensues, as the pair struggle to raise the funds needed without resorting to a loan from Judy, Sage’s corporate-driven banshee of a mother (Marcia Gay Harden).

Fortunately for Sage, her grandma, Elle, is portrayed by the wry, knowing, cranky Lily Tomlin. There’s no judgement, only hip compassion served up with dollops of cynicism and sarcasm, a few tattoos and a joint or two. Along the way, Elle comes to the grips with her own demons, including a harsh breakup earlier that day with a loving girlfriend of 4 months (Judy Greer). There are funny skirmishes with old flames, past and present; irate coffee shop owners; and even vicious, pint-sized Right to Lifers.

The movie owes much to Tomlin, as engaging and bright a screen presence as ever. It’s not an earth-shattering performance by any means, but it’s nuanced, exhibiting Tomlin’s natural effervescence, her gift for crisp comic delivery, and her ability to downshift a comedic scene into one of dramatic gravity.

Everyone else is a broadly-drawn caricature — including Laverne Cox, who, as a rebellious, transgender tattoo artist, is given nothing to do. Only Sam Elliott, as an ex of Elle’s who can’t let their past go, soars. The moment he reveals his long-suffering pain, Grandma becomes genuinely moving.

Grandma is not dramatically rich enough for the Oscar-worthy fall slate, but it’s good enough for the tail end of summer. It’s a trip worth taking if you’re a Tomlin fan. And there are, thankfully, no pies. 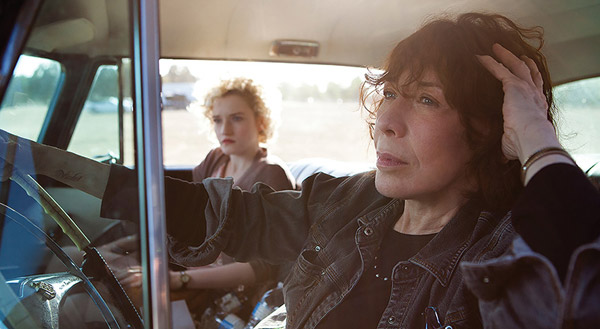