Carmen doesn't quite take off until the second act, but it's a flight worth taking

Rather like one of those old-fashioned planes that takes a long time to build up speed, veers a bit, and bounces a few times before getting airborne, the Washington National Opera’s production of Bizet’s Carmen doesn’t quite launch until the second act. That said, with expectations in check, it’s a flight worth taking.

It’s not wholly the production’s fault. Whether you’ve seen the opera or not, the character and plot of Carmen (

) — rehashed and referenced with regularity — will be abundantly familiar. Resident gypsy and man-eater Carmen flirts her way through the local garrison, soon setting her sights on the pre-occupied young corporal Don José. Once she turns on the charm, it isn’t long before Don José is madly besotted and doing prison time to protect her. He only balks when she later insists he abandon his soldierly duties as well. As Act One ends, he is forced to make a choice that sets up the far more dramatic cascade of events in Act Two.

Making this narrative fresh is certainly a challenge –- but it is further compounded by the attenuated pacing of the first act. It is positively leisurely. In more innocent times, audiences no doubt couldn’t get enough of Carmen‘s racy persona and cat fights, but in this day and age, it feels more like foot-dragging. But the pacing is essential, as it allows for Bizet’s charged and tantalizing music and its gorgeous arias.

The creativity lies in finding ways to engage the audience visually and theatrically while the first act plays out — and it is a dilemma director E. Loren Meeker doesn’t quite solve. One reason is her reliance on rather too much of choreographer Sara Erde’s tenuous, wandering crowds. The unraveling movements of the adult chorus may echo the wistful underlay of Bizet’s score, but after a time, it distracts. And yet it is equally distracting when Erde separately over-choreographs Carmen, giving her far too many precarious-looking tabletop maneuvers that beg disaster. Carmen is an earthy, physical woman, but with Clementine Margaine in the role, this could have been fully apparent without risking her accidentally grinding on an inkwell.

And this is the point. Margaine has more than enough vulpine charisma to carry this Carmen, and once she sings, her sumptuous, lustrous tone and power leave no doubt of it. To hear her unhurried voice is to be bewitched, and it is this quality, along with her fresh and mischievous smile, that we need. And indeed, she carries the first act, despite its issues.

It gets somewhat more complicated with Don José. Not only must tenor Bryan Hymel overcome a cardboard cutout of a character, he must do so without much help from the either Meeker or, again, Erde. Take, for example, the key moments in which Carmen dances for Don José in her bid to convince him to abandon his soldier’s duties. It’s a seminal moment for José; a potentially irrevocable slippage in his fragile sense of self. And indeed, Carmen ends the scene astride him in a move that is at once sensual and dominant. It is a key moment for the character and yet we cannot truly see his face. We needed this and other such moments showing the man’s soul-consuming love and lust for this extraordinary woman if we are to make sense of the events to come.

Still, and despite the shortcomings, Act Two quickly gathers momentum. By the time the opera climaxes with Don José’s confrontation of Carmen aside the bullfighting arena, the dramatic tension is gruelingly taut. And in their stark encounter, Meeker finally does what she couldn’t quite do in the early scenes: carve an emotional space for her characters. And remarkably, it’s a space in which Hymel overcomes José’s flaccid first act to deliver an astounding rendering of this unhinged and ultimately dangerous man. He also opens his tenor to offer a fuller, more expressive clarion call, one that is rife with the agony and alarm at what he knows he will do. Coupled with Margaine’s embodiment of Carmen’s resolve — and her terror — the production finally delivers the tragic immediacy that turns it from so-so to must-see.

The other standout here is Janai Brugger in the role of Micaela, Don José’s quickly discarded fiancée who is also symbolic of the life and commitments he leaves behind. Brugger has the tough job of epitomizing virtuous and unassuming womanhood, which she manages with understated grace, but her star turn comes with the hauntingly sad aria “Je dis que rien ne m’epouvante” in which she mourns the loss of her future with Don José. Brugger sings with intensely appealing dimension and precision, the emotion arriving with subtle and devastating stealth.

As Escamillo, the exciting matador who signals the end of Carmen’s passion for Don José, Michael Todd Simpson sings with bold energy but not as much expression as he might. He cuts a striking figure, but the choreography again gets in the way. The more he stalks the stage, the less impressive he is. Alphas draw the eye; they don’t chase it. In the role of Zuniga, Don José’s military superior, Kenneth Kellogg delivers his worldly man with an interesting layer of menace and sings with compelling texture and tone. He works the room with an understatement that would have done for a convincing Escamillo.

Finally, using the two dancers, Fanny Ara and Timo Nunez, to punctuate the drama is an attractive idea. But they are so extraordinary, charismatic and contemporary, they argue with the ponderous pacing of the early act and the emotional realism of the second.

And yet, despite such bumps and the slow start, there is just too much good here to miss. It may be a fait accompli, but it’s a beautiful one. 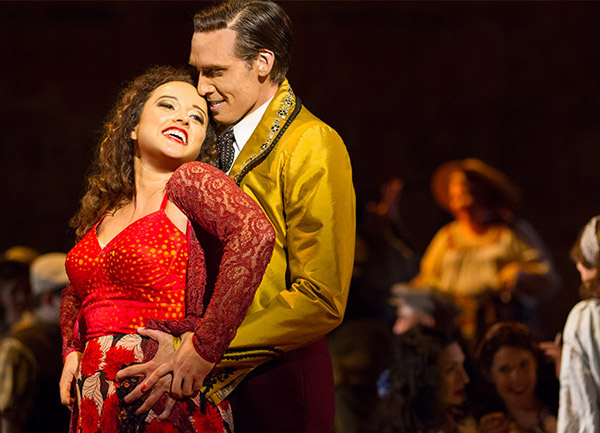