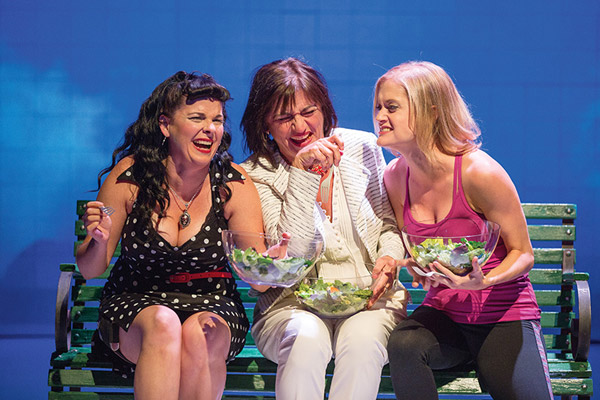 As they say about life, no one gets out alive. And at this point, the same might be said for women and their identities. A quick glance at the nearest glowing screen offers Yahoo CEO Marissa Mayer being simultaneously lauded and pilloried for returning to work two weeks after delivering twins (albeit with a nursery attached to her office), Nicki Minaj drawing fire and fervor for her music video Anaconda, and female barrister Charlotte Proudman being emphatically embraced and trolled for outing the sexist comments of a senior lawyer on her Linkedin account.

Then there are the slack-jawed supermodels, defiant super-sized models and, floating like an endless internet snowstorm in between, the marketing images of Stepford women. These are the yoga-fit cyborgs presiding in various states of bliss over bright, uncluttered kitchens, tidy desks, clean and joyful children and — as playwright Sheila Callaghan so aptly notes in the title of her play — they are the Women Laughing Alone with Salad (

What is a woman — or a man — to make of this circus of female images?

Callaghan, being obviously intelligent and sensible, does not pretend an answer. What she does do, boldly, hilariously and irreverently, is to pin onto her board the modern woman’s dysfunctional zeitgeist, like some kind of mad, surreal butterfly. And there she examines it, plays with it, takes the dust off its wings and, after a time, lets it go. The issues may be no neater when she’s done and arguably she wasn’t quite finished, but what she does do is the rarest of things: cleverly and accurately captures and displays the disease. The act alone feels like the beginnings of a cure.

As gloriously unfettered (and feverish) as her previous Woolly sensation Fever/Dream, Callaghan again spins a riveting tale of topsy turvy modern morals in which wild interludes, spectacularly apt references, and hallucinogenic digressions are as indispensably enthralling as the narrative. This time Callaghan delivers a composite of the lives, loves, dreams and delirium of three women and a man, tracking the question of whether the buxom Meredith belongs with Guy, a man she attracts with her confident curves and moves. The problem for both is that they have each been brainwashed into a very different idea of the societally-acceptable girlfriend and womanhood in general. Sitting on the lid of Guy’s repressed id are the adamant edicts of his complicated mother Sandy and the dysfunctional but safe pressures of his incumbent girlfriend, Tori. She may be a super-skinny, eating disordered doormat-cum-hood-ornament with an enthusiasm for brunch (or at least the idea of it), but at least she meets with society’s expectations. As the characters grapple with self-doubt, the images and messaging that have plied 24-7 into their psyches — and ours — continue apace.

Callaghan’s way of seeing — a kind of dream-time in which the characters and issues swirl — is extraordinary. Here, it is a vision executed with incredible visual dexterity and wit thanks to the design team of Misha Kachman (sets), Ivania Stack (costumes), Colin K. Bills (lighting), Palmer Hefferan (sound) and Jared Mezzocchi (video). These are people who can get water-drenched lettuce to flex seductively — need one say more?

That said, it’s a wild arc of a play, no doubt a challenge to pull off, and director Kip Fagan certainly shoots it out of the cannon with the energy and direction it needs. But there is not much he can do about Act Two, which largely redirects the focus onto Guy. It also brings a change in mood which, though it keeps some of the humorous irreverence of the First Act, is muted by comparison and less clever.

The rabbit hole into which we follow Guy, and to some degree Sandy, is interesting, but it leaves all the energy and beautifully posed questions of the First Act hanging. No one wants to see a genius like Callaghan hamstrung by the physics of conventional storytelling, but one can’t help wishing she had chosen to drill deeper on her opening themes.

An enormous driver in this early excitement is Kimberly Gilbert’s phenomenal portrayal of the hilariously, but also tragically, conflicted Meredith. Gilbert brilliantly captures her do-loop of defiance, uncertainty, and inner panic as she attempts the modern, porn-informed mating game. It is her struggle that resonates loudest in the play’s enormous fourth presence: the cavalcade of images and films of woman and salad and what they symbolize.

“It’s a wild arc of a play and director Kip Fagan certainly shoots it out of the cannon with the energy and direction it needs.”

As the indefatigable Tori, Meghan Reardon is right on the money with the perfect mix of confidence and bewilderment. She has great comic timing and shows a lot of craft in revealing what Callaghan has to say about the Toris of this world.

As Sandy, Janet Ulrich Brooks is dark, interesting and memorable, but the character’s backstory is loaded to the point of cancelling itself out. In a later incarnation (not to be revealed here), Brooks offers more of her intensely compelling craft and some good comic timing, but coming only after Callaghan has left behind the uproarious rebellions of the First Act it feels tenuous and somewhat deflated.

Looking the part, Thomas Keegan brings much comedy to his Guy, the right kind of dude-like thereness in his scenes with the young women (if a little vocal strain), and some understated angst to his scenes with Sandy.

Bottom line, Women Laughing Alone with Salad is a cultural hand grenade, and as Woolly’s offering to the Women’s Voices Theater Festival, it can’t be beat. If only there was a way to toss it into the nearest screen.