The Shakespeare Theatre Company's Salomé is a challenge on several fronts, but it's one you should consider accepting 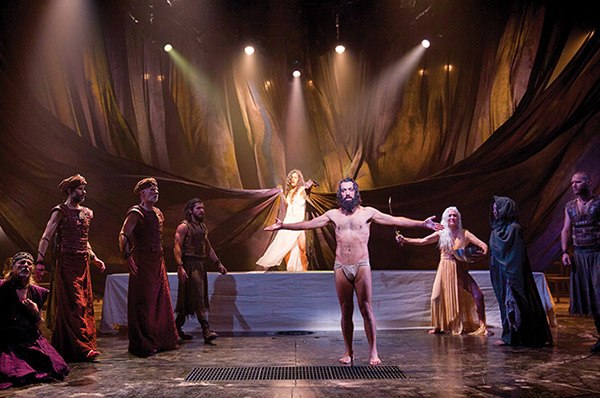 A high-concept interpretation, almost to the point of being performance art, Yael Farber’s adaptation of the biblical story of Salomé (

) is a dream-like riff that mixes the historical, the metaphorical and the speculative. It is an uncompromisingly earnest reflection on the intersection between this woman’s embodiment, literal and otherwise, of personal activism and the oppression of herself and her people.

It is also, truth be told, the kind of theater that turns people off.

Between the leaden tone and the slow-motion movements of the ensemble forming themselves into tableaux, there will be many an eye roll. Throw in the accusatory narrator sitting with legs feminist-akimbo, the effete pair of Jewish high priests striking poses, and Pontius Pilate (in a variation on Hellraiser’s maxi-skirt) delivering historical expository text-book style, and feet will begin to shuffle.

And for those with a tendency to giggle in church (or synagogue), there is the very real danger of an evening of marathon suppression. Not only do many of the techniques here beg to be mentally spoofed, Yeshua the Madman is painfully reminiscent of Terry Gilliam’s Patsy in Monty Python and the Holy Grail.

But — and it’s a big but — there are also the extraordinary, and at times exquisitely mournful, voices of Lubana Al Quntar and Tamar Ilana, whose singing invites the mind to wander and reflect on Farber’s themes. There are often beautiful moments, when movement director Ami Shulman gives the actors hauntingly exotic shapes and designs. There is scenic designer Susan Hilferty’s highly effective and thoughtful use of sand, water and a circulating stage, which combines with Donald Holder’s gloomy lighting to symbolize the overlap between ritual and reality. And there is the visually arresting figure of Salomé, played with tremendous physical competence and a feverishly searching energy by Nadine Malouf, as she embodies Farber’s concept of a woman politicized and political, terrorized and yet capable of bringing terror.

The mood and place created by all of these elements, if you are open to them, can lead to interesting contemplations: how history has shaped the Jewish experience; the fertile landscape of women’s bodies and how they mirror life-giving land; the tension between progress and tradition; the annihilation of the abused soul and its struggle to rebirth; the desperate places from which madness — and sometimes courage — grow.

So where does all this leave the average theatergoer?

It depends on one’s mood. Salomé is a thesis wrapped in high-concept theatrics. If you can enjoy the process of agreeing or disagreeing with Farber’s premise, then you will likely also appreciate the artful way in which the playwright makes her points. If anything approaching performance art and the phrase “feminine narrative” make you balk, it will be a long 90 intermission-less minutes.

“As Salome, Nadine Malouf embodies Farber’s concept of a woman politicized and political, terrorized and yet capable of bringing terror.”

Still, it is impossible not to appreciate the cohesive and engaged ensemble who deliver, if not a conventional drama of emotion, then certainly a spiritual potency. Aside from a memorable Salomé, Olwen Fouere as the Nameless Woman and narrator sources an eternal kind of anger as she carries the story over Farber’s rocky and sometimes mysterious terrain. Her accusatory stare is relentless, but taken conceptually, it makes much sense. Of the other players, Yuval Boim delivers an appealingly strange and exotic Caiaphas, one of the high priests, and adds much to the tableau with his expressive physicality.

Most unusual and affecting of all, however, is Ramzi Choukair’s Iokanaan, aka John the Baptist. Wild of beard and half-naked he may be, but Choukair’s Iokanaan walks and talks and questions with a palpable realness that transcends Farber’s construct. As he paces and speaks, translated by others, he evokes an essential saneness and humanity amidst the madness. His moments with Salomé might easily have turned into a caricature of attraction or holiness, but Choukair makes his Iokanaan, subtlety and without fanfare, a real and practical man. A man who Salomé might, in another lifetime, have loved. It doesn’t mean they would have loved — that is far too much the fairy tale for Farber — but it does give him the fragile, palpable pulse of life and it makes Salomé’s later request for his death that much more affecting. At least as far as Farber’s interpretation allows it.

How real, or surreal, the human relationships are is one of her many choices here — all with costs and benefits. Another is Farber’s strategic use of nudity. Although it is always possible to argue the artistic merits of getting naked on stage — that it represents the stripping away of various metaphorical layers or reveals human vulnerabilities — it is almost impossible to pull off. The reality is that in the vast majority of cases, nudity immediately and irrevocably breaks the fiction. It works only in the most finely-honed contexts. Even if the playwright or director wants it to break the fiction, it must be set up with the greatest of care.

Here, as brave and focused as the actor is and as much as Farber wants to manifest the concept of baptism and challenge our relationship with the female form, it serves only to distract. Put another way, the intellectual aspects may be important and compelling, but if they vanish as soon as one starts wondering where the razors were in the First Century ACE, then all is lost. It also begs another, rather cheeky, question: if the nudity has to be real, then why not the beheading? 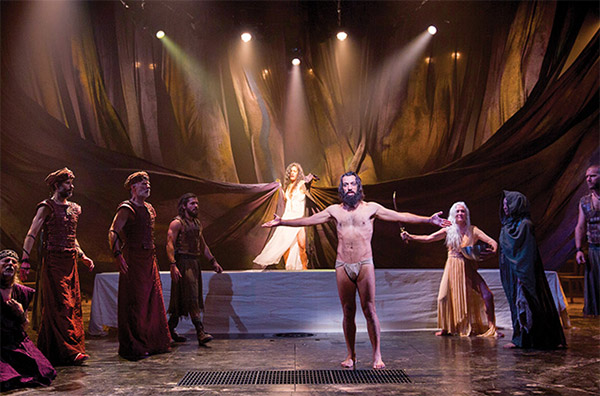 ← Previous Story Grand Transformations: “As One” at UrbanArias
Next Story → Operatic: Tenor Randall Bills to perform with Washington Concert Opera