By John Riley on November 7, 2015 @JohnAndresRiley 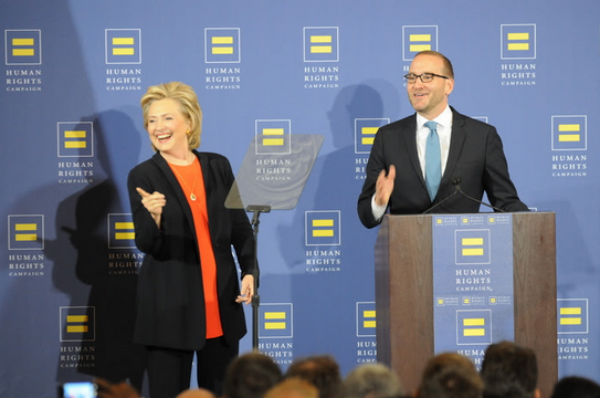 Hillary Clinton gets introduced by HRC President Chad Griffin (right) before her speech to LGBT activists and members of the Human Rights Campaign on Oct. 3 in Washington. (Photography by Ward Morrison)

Former Secretary of State Hillary Rodham Clinton on Friday defended herself against criticism for defending her husband’s decision to sign the Defense of Marriage Act (DOMA) as president and her claim that it was a defensive action taken to protect against a constitutional amendment banning same-sex marriage.

Clinton made the initial comments as part of an Oct. 23 interview with Rachel Maddow on her MSNBC show. But she was criticized by Bernie Sanders, her opponent for the Democratic presidential nomination, as well as some of her supporters such as Elizabeth Birch, the former head of the Human Rights Campaign, and Hilary Rosen, a Democratic strategist and LGBT activist. According to Birch and Rosen, the possibility that the then-Republican-led Congress would pass a constitutional amendment to ban same-sex marriage was never seriously raised in public discussions during the Clinton administration.

During Friday night’s Democratic forum in South Carolina, which aired on MSNBC, Maddow, now serving as moderator, asked Clinton about the pushback she had received for her previous comments on DOMA.

“Well, certainly, in thinking back on it, those were private conversations that people did have,” Clinton said, referring to the specter of a constitutional amendment. “And I am more than willing to say, again, that was something that came up in private discussions. The important thing is: DOMA is gone.

“And look what happened under the George W. Bush Administration when it was Karl Rove’s strategy to put constitutional amendments on state ballots, which all but a few passed,” Clinton continued. “It was one of the reasons, I think, that the Kerry campaign had some challenges in 2004. This was a very real problem that people were concerned about. And if I’m wrong about the debate, I obviously take responsibility for that. But I think the important thing is that we are now beyond that. My husband has certainly said, and I agree with what he said, that now, thankfully, we have moved to a stage where marriage equality is the law of the land.”

Clinton then pivoted to address anti-LGBT discrimination, saying: “What we haven’t yet done is to deal with the discrimination that still exists, and try to figure out how you can help people who can now legally get married on Saturday and then get fired on Monday.”

Maddow then asked Clinton to explain what happened in Houston with that city’s HERO nondiscrimination ordinance, and whether losing in a Democratic-leaning city like Houston meant if Democrats had been unable to defend such an ordinance on more favorable turf.

“Well, Rachel, look at what happened. Because you’re right, this ordinance is similar to ordinances in cities across America, including in other cities in Texas,” Clinton said. “But what the far right did, very successfully, is really engender a lot of fear and a lot of anxiety, and create this backlash against this ordinance. And they used the bathroom issue. And yet, you could go to another city in Texas, like San Antonio, and you would know that that was totally without merit, that there was no basis for it.

Must read: Clinton: Most people my age had to evolve on marriage
Also read: The evolution of Hillary Clinton: From DOMA to marriage equality

Besides Clinton, former Maryland Gov. Martin O’Malley was the only other candidate to specifically reference LGBT rights, though he did it by touting his leadership on marriage equality in the Free State and as part of a stump speech he gave at the beginning of his one-on-one interview with Maddow. O’Malley said that when talking to young people, he believes they are ready to move in a more progressive direction, including on gay rights, as almost none of them ever broach the topic about denying LGBT people equality under the law.

John Riley is the local news reporter for Metro Weekly. He can be reached at jriley@metroweekly.com
← Previous Story Kim Davis appeal rejected by 6th Circuit
Next Story → Bevin vows to remove clerks’ names from marriage licenses