Home / Arts + Entertainment / Stage / The Politics of Living: Guards at the Taj and City of Conversation (reviews)

The Politics of Living: Guards at the Taj and City of Conversation (reviews)

A mythic dream that contains the very real, very human question of what brutality does to the soul, Rajiv Joseph’s Guards at the Taj (

) is thoughtful, sometimes funny, but never quite where it needs to be.

The problem starts with the sense that one has somehow seen this all before. Not the intriguing, 17th Century Indian myth in which Joseph places his two characters, Babur and Humayun, but in their mildly combative “buddy movie” relationship and the way the sweeter, more visionary of the men fares so much worse than the pragmatist. It feels derivative of too many movies and too much television.

This wouldn’t have mattered so much — the “buddy” dynamic endures because it entertains — except that Joseph never imbues it with enough of its own appeal and originality. The concept of two lowly palace guards who must grapple with the increasingly horrific demands of their emperor’s regime — and its strange contrast with the beauty they are tasked with protecting — is potent. But the banter isn’t quite witty enough, their serious discourse ultimately provides little insights, and there is not enough palpable love between the men to transcend the usual.

Even when Babur expounds on his quite beautiful ideas on the universe and fanciful inventions, it is quickly tempered by Joseph’s rather obvious references to the here-and-now — an aspect that dampens the only moments that begin to feel original. It also injects a contradiction: Babur is upset that the brutal emperor is killing beauty, and yet he sees enormous and enduring beauty in his surroundings and the cosmos.

The other drawback here is director John Vreeke’s rather heavy-handed staging. He allows a bit too much inconsequential hollering. And although Misha Kachman’s sets and Jen Schriever’s lighting quietly bring a certain gravitas, the cumbersome slapstick when the men wrestle and their long cleaning of the set steal from their poetry.

Still, the actors do manage to create some genuinely funny moments and do their best to bring pathos. Ethan Hova’s Humayun is a good straight man to Kenneth De Abrew’s free-spirited Babur, looking dolefully into the middle distance while his friend waxes lyrical. Hova has a kind of Adam Goldberg-esque demeanor which convinces, but also feels like a missed opportunity. One wishes Joseph had explored this latent neuroticism. Abrew gives his Babur the light and enthusiasm he needs and does his best to deliver the emotional torque that must come, but there is only so much he can do without more meat on this bone. Yes, these are childhood friends. Yes, innocence may be taken or destroyed. Yes, the imperative to survive may strip us of our souls. But, without a greater sense of the connection between these two men, a greater sense (spiritual, intellectual, emotional) of what may be lost, or indeed gained under terrible duress, the play is trapped on a ho-hum level.

LIGHT YEARS AWAY in another universe, there’s a different kind of banter in The City of Conversation (

), Anthony Giardina’s reflection on the life and unhappy times of a semi-fictional Georgetown doyen. Hester Ferris is Giardina’s imagining of the kind of matriarch who has operated behind the Washington political scene for decades, using luncheons and dinner parties to help a husband’s career and further ideals. But in Giardina’s world, these powerful and consuming preoccupations come with a price.

Like Taj, Giardina is trying to do too much with too little. He tries hard to give an intriguing view into Washington’s old guard — that highly-coifed set still air-kissing their way down the aisles at the Washington National Opera — but the strokes are too broad and too adoring. The feel is commissioned biography not real life, despite the family crisis at its core.

Hester has alienated her adult son Colin and she goes on to wage war with his fiancée, Anna Fitzgerald, with ramifications that will last decades, but Giardina expresses it as a battle of ideologies, not genuine people. We are told everyone’s political affiliations (and why they have them), their jobs (and what it says about them), and their generational attitudes (with all inherent hypocrisies). It requires an almost endless expository and it leaves virtually no meaningful room for inner lives, fears, and flaws. Every emotion is principled and it’s not just unrealistic, it’s boring.

And there is something a tad unpleasant lurking in all these competing interests. Two generations of mothers are failing here because they have — like men — either held powerful convictions or wanted a meaningful career. Such a potent topic left undeveloped feels like a message. And then we are left with Hester’s ultimate claim that it is her single-minded efforts and sacrifices that have allowed grandson Ethan to flourish in a tolerant America. There has been so much grandstanding, it’s impossible to tell if Giardina is defending or describing her. The former would pander annoyingly to an already smug class, the latter far too unexplored.

Margaret Colin does her best to breathe life into Hester but she is too measured for Giardina’s affected language, despite her charisma. It calls for a Bette Davis kind of swagger which Colin does eventually decide on, but only in Hester’s dotage. As her son Colin, Michael Simpson is a very convincing twentysomething, a wholly unconvincing thirtysomething, and indistinguishable as grandson Ethan. Caroline Hewitt gamely delivers the wonderfully repugnant Anna, managing to bring a brittle certainty and then a sweaty panic to a character built on expository and air. In a small role, Freddie Bennett is quietly exceptional as grandson Ethan’s patient partner, Donald Logan. The other stand-out is Ann McDonough, Hester’s long-suffering sister, Jean Swift. She does the best job here of creating a sense of these rarified women and their odd relationship to the world beyond their walls. That big, messy one in which they — and this play — never truly mingle.

Guards at the Taj 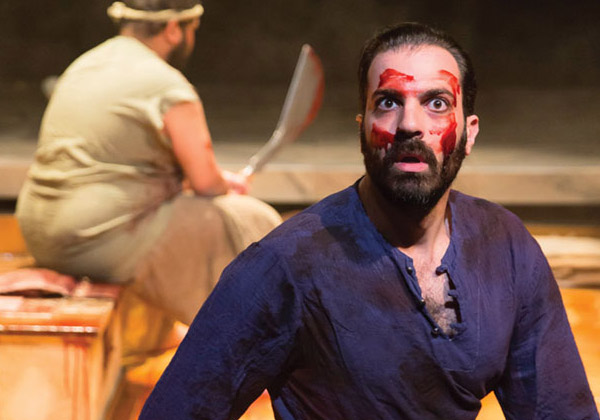