The Republican National Convention: Our Reaction in Emoji

It's been a bizarre, racist, plagiarizing, anti-LGBT couple of days in Cleveland

Yup, this happened. Republicans cheered as Melania Trump told them to “work hard,” “do what you say,” “keep your promise,” and “treat people with respect” (ironic, we know). Unfortunately, the GOP was going nuts for words First Lady Michelle Obama had said eight years ago at the Democratic Convention. If you listened closely Monday night, all across the country the sound of conservative heads exploding could be heard.

Mary Fallin, Governor of Oklahoma, told CNN that the GOP cares for everyone, which is why the party’s Platform Committee enshrined numerous homophobic and transphobic things into the 2016 Party Platform. Because they care. Oh, and it was totally okay that they did it, because there was one gay woman on the 112 person committee. A woman who was reduced to tears by the bigotry of her colleagues. Because they care, remember? How often do we need to say it?

Get the lowdown on the most anti-LGBT GOP platform in recent memory.

Log Cabin Republicans taking out an ad bashing their party:

A week after Log Cabin Republicans president Gregory T. Angelo told supporters he was “mad as hell” at the party’s bigoted platform, his organization took out an ad in the Cleveland edition of USA Today. Check it out below. 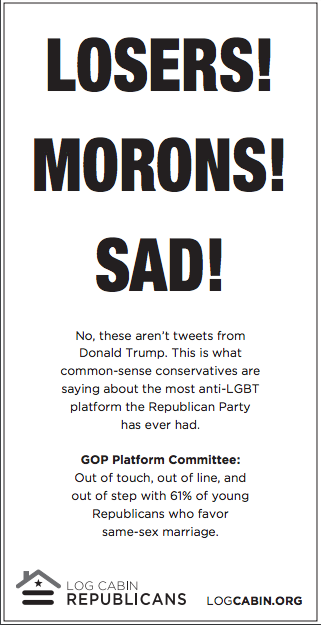 That’ll really change hearts and minds, guys! It’ll be as successful as your 40-year mission to change the GOP from the inside out, which totally helped avoid 2016 being the year of the most anti-LGBT platform in the history of the Repub- Oh. Wait. Never mind.

Fuck Rep. Steve King. Seriously, just… ugh. As if the GOP, with its plans to build a wall and ban Muslims from entering the country, couldn’t get any more racist, King stumbles onto MSNBC and starts railing against anyone who isn’t white.

No, for real. He started questioning the contributions to history of “other categories of people.” Check it out:

As Vox points out, King ignored the Egyptians, Middle Eastern scholars, the Chinese, India, Africa (which basically birthed humanity as we know it), and more.

Let’s all watch this hilarious sketch by SNL and try not to cry at the fact that it’s dangerously close to reality:

That’s all we have to say about this. Except maybe this:

If Trump wins, we’re all doomed.

Each of the previous three times -- during the regular legislative session and two special sessions during the summer -- a transgender sports ban has passed the conservative Texas Senate only to fall short in the House of Representatives.