By John Riley on September 22, 2016 @JohnAndresRiley 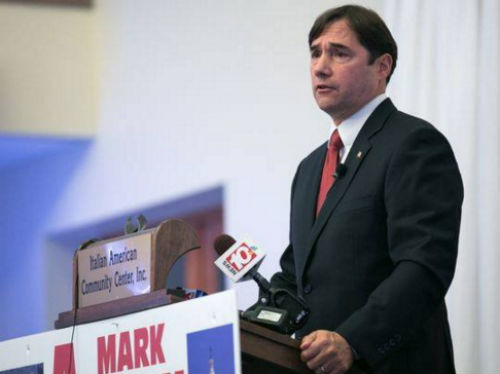 A congressional candidate is apologizing for comments he made 10 years ago when writing for a conservative blog. Mark Assini, who faces U.S. Rep. Louise Slaughter in a Rochester-based district this November, wrote about his opposition to LGBT rights and same-sex marriage, but now says he no longer holds those views.

According to the Rochester Democrat & Chronicle, Assini agreed with a reader who called LGBT people “sexual deviants” and quoted a pastor who called transgender individuals “mentally disturbed.” Assini also joked that former U.S. Rep. Barney Frank (D-Mass.) should go to prison, where “Old Barney would have plenty of dates along with three squares and cable TV.”

Assini, the supervisor for the town of Gates, N.Y., apologized for the comments and told 13WHAM News he regrets making them. He attributed his change of heart to family members and friends who have come out since then.

He also noted that he deleted the blog two years after writing it, but it has since been revived and leaked to the media.

While Assini insists that would not support any amendment to ban same-sex marriage and supports LGBT rights, he noted that he is not the only elected official to change his opinion on LGBT rights. Both President Barack Obama and Democratic presidential nominee Hillary Clinton changed their positions on same-sex marriage, and the American Psychiatric Association only decided to stop classifying gender dysphoria as a mental disorder in December 2012.

“It’s not today. It’s not yesterday,” Assini told the Democrat & Chronicle of his past views. “It’s been a couple of years that position has evolved. … To try and hold somebody to a standard from a decade ago is a tough thing to do.”

Members of Rochester’s LGBT community rallied to denounce Assini’s past comments, with many contrasting them to Slaughter’s record on LGBT rights. Assemblyman Harry Bronson, who is openly gay, said Assini’s comments aren’t something voters should be hearing from someone running for Congress.

Bronson told 13WHAM that it doesn’t matter if Assini made the comments a decade ago, because the words are still hurtful and offensive. He added that apologizing is a good start, but said Assini needs to prove his support for LGBT rights through his actions.

John Riley is the local news reporter for Metro Weekly. He can be reached at jriley@metroweekly.com
← Previous Story Social Risks
Next Story → Pulse nightclub shooter’s first wife: My ex-husband was gay and “tormented” by his homophobic father