After fourteen films in their carefully maintained cinematic universe, it’s somewhat incredible that Marvel delivered something as refreshing as Doctor Strange (

). As DC struggles to find a formula that works and the Avengers teeter precariously on the brink of oversaturation, who would have guessed that the perfect antidote would be the relatively niche, philosophical, supernatural, unashamedly intelligent Dr. Stephen Strange? A hero for the ages he most certainly isn’t. A hero for our Captain America-fatigued screens? Absolutely.

Appearing on the “tortured genius” end of Marvel’s superhero spectrum, Strange is equal parts Iron Man, Dr. House and Sherlock Holmes, a man of breathtaking arrogance, intellect and skill. A neurosurgeon who only takes patients that will both demonstrate his surgical abilities and guarantee the continuation of a perfect success rate, he revels in proving his superiority — whether through his work, his oversized New York apartment, or his grossly powerful Lamborghini. It’s that latter asset that transforms him into Doctor Strange: ignoring every safety message since the ’90s, he spins off the road while using his phone, crippling his hands and eventually spiralling into depression. What’s a man to do when the tools he uses to define himself are damaged? As it transpires, seek out a bald Tilda Swinton. Simple, really.

Doctor Strange is an origin story that places the journey of its central character above all else — often to its detriment — but it’s stocked with an incredible cast. As the titular doctor, Benedict Cumberbatch swaps his English accent for an (occasionally strained) American one, delivering the swagger, the intellect, the emotional turmoil of Strange to excellent effect. As Strange stumbles across an order of people dedicated to protecting Earth from supernatural attacks, pragmatism grapples with existentialism and spirituality — and Cumberbatch rolls through his various emotions with ease.

As the Ancient One, who commands all other sorcerers in their battle against dark forces, Tilda Swinton steals every scene. Mercifully, the potential racism of her casting — the Ancient One is a man born in the Himalayas in the comics — is dealt with in a single line. Her origins are Celtic, Karl Mordo (Chiwetel Ejiofor) pointedly and awkwardly tells Strange, presumably with lawyers wringing their hands just off-screen. It matters not in the context of the film, however. Swinton imbues her Ancient One with steely determination and somewhat distant compassion. Her otherworldliness has perhaps never been better suited to a role, as she guides Strange through his introduction to a world of magic, multiple universes and teaches him that his broken hands are not the limits of his abilities.

It’s that magical element that helps transform Strange into something more than standard popcorn fare. The script, co-written by director Scott Derrickson, crackles with philosophical musings on life and death, the power of self control, the arrogance of man, and the potential futility and insignificance of the individual amidst a multiverse of seemingly infinite worlds. As the Ancient One, her second-in-command Mordo, and librarian Wong (Benedict Wong) teach Strange to unshackle himself from his ego and utilize magic to open portals, create weapons, blend through dimensions and more, some in the audience may struggle to keep up. That Doctor Strange never bogs down under its own pontificating is predominantly down to Derrickson’s commanding direction — and the unrivalled work of Marvel’s effects team — in bringing the world-altering and physics-bending magic to life.

The Big Bad of Doctor Strange is Dormammu, who seeks to absorb every universe into the nothingness of his horrible Dark Dimension. Naturally, someone got the crazy idea that, because there is no concept of time in this dimension, it’s a place where people can live forever. Enter the woefully underused Mads Mikkelsen as Kaecilius, a fallen sorcerer who stole a ritual that can bring Dormammu to Earth. Sporting eye makeup that evokes glam rock by way of amateur theatre, he drops in and out to occasionally test Strange’s growing abilities, but is ultimately little more than a distraction from the main journey: namely, Strange discovering how powerful he can really become.

That being said, Kaecilius does bring one of the most spectacular scenes ever committed to film. With the ability to bend the world around him, he battles Strange and Mordo in New York, twisting buildings, roads, signs, cars, subway trains and more into something that resembles Inception by way of M.C. Escher, a kaleidoscope and a heavy dose of steroids mixed with LSD. Do not see this film in 3D while high, as it’s likely to melt your mind. Derrickson maintains tight control as Strange and Mordo fall in every direction through the ever-changing city, which constantly shifts perspectives and directions. If you only see Doctor Strange for one reason, this is it. It’ll leave your jaw on the cinema floor.

It’s something of a shame, then, that everything else is business as usual, at least in a Marvel sense. There’s the usual blend of seriousness and humor — Strange’s sentient cape offers slapstick in droves — mixed in with all the usual origin story nonsense we’ve come to know and love: Strange doesn’t want to be a hero, and you won’t change his mind, until something happens and he inevitably decides that sure, he might as well do it. There’s two excellent sidekicks in Wong and Ejiofor. Rachel McAdams shines as love interest Christine Palmer — not least because McAdams is a great actress, but also because whomever wrote her wasn’t obsessed with the trope of distressed damsels. There’s even reminders that yes, Strange exists in the Avengers’ universe. There’s the usual Marvel sheen to everything, too — that intangible quality that DC hasn’t been able to match since Dark Knight. 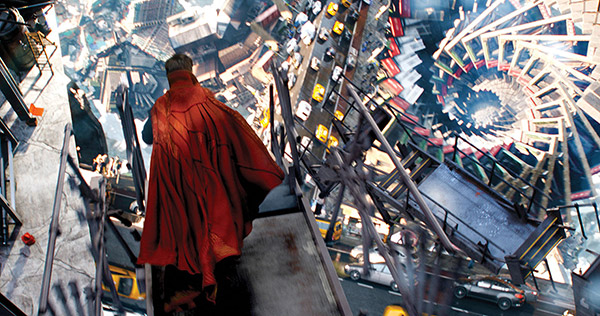 It’s when Strange gives in to its… well, strangeness, that it stands out from other superhero films. The final battle might be somewhat anticlimactic, overly short and all too neat, but it’s also smart, witty and not just a mass of explosions (though there’s plenty of those, as well). One of the film’s most poignant moments is a balcony scene between Strange and the Ancient One. As muse on the inevitability of death, the necessity of its inevitability in ensuring our humanity, and the fear we all must face as it approaches, Doctor Strange reaches something no other Marvel film has accomplished in recent memory: a genuine, hard-earned, emotional response. And all that while engaging in philosophical debate.

Derrickson’s film ultimately succeeds not in its bombastic, spectacularly choreographed, multi-dimensional fight scenes, or in its effects-heavy magical moments. Instead, it’s at its best when a cast of incredibly strong actors deliver words that, in any other context, would be utterly preposterous. But in Strange, with the suspension of disbelief in full effect, it becomes something more. By embracing the weirdness of its premise and the philosophy at the heart of its mind-bending magic, Doctor Strange offers an origin story that, while far from perfect, feels truly original. And after fourteen films, that’s the biggest surprise of all.