Trump picks Nikki Haley to be next UN ambassador

South Carolina governor has a mixed record on LGBT rights 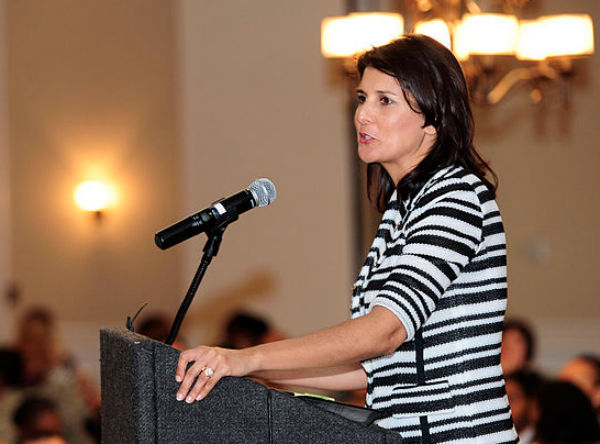 LGBT record: Generally opposed LGBT rights as governor of South Carolina, including defending her state’s ban on same-sex marriage. However, she has also called on the GOP to respect different types of families and opposed the push for an anti-transgender bathroom bill in the Palmetto State.

President-elect Donald Trump has chosen South Carolina Gov. Nikki Haley as his nominee to be the next U.S. ambassador to the United Nations. The elevation of Haley, currently the governor of South Carolina, to a cabinet-level position within his administration is quite surprising, particularly as Haley was highly critical of Trump.

In her role as U.N. ambassador, Haley will be expected to follow in the footsteps of her predecessors in the Obama administration, Susan Rice and Samantha Power, in speaking out against human rights abuses carried out against LGBT people. Gregory T. Angelo, the president of the Log Cabin Republicans, is fully supporting Haley and believes she will give voice to this issue.

“If you’re concerned about global LGBT rights, you should be cheering Donald Trump’s selection of Nikki Haley as U.N. ambassador,” Angelo said in a tweet.

If you're concerned about global LGBT rights, you should be cheering @realDonaldTrump's selection of @nikkihaley as U.N. Ambassador.

Angelo also went further, referencing Haley’s remarks when she gave the response to President Obama’s State of the Union address earlier this year. In that speech, Haley said that the GOP would protect people’s religious liberty while also “respecting differences in modern families,” which was interpreted as a nod to same-sex couples raising children.

In @nikkihaley we would have a Republican U.N. Ambassador who wants to "respect differences in modern families" https://t.co/1RQGyFNNiH

Yet during her tenure as governor, and previously, as a state representative from the suburbs of Columbia, Haley has amassed a record of not being particularly friendly towards the LGBT community. In 2012, she said she endorsed Republican presidential nominee Mitt Romney only after checking his position on same-sex marriage to make sure he opposed it. When South Carolina was facing a federal lawsuit targeting South Carolina’s voter approved constitutional amendment banning same-sex marriage, she vowed to defend the law, saying she’d “fight for it every step of the way.”

On the other hand, Haley, who represents a more establishment — and, at times, more practical — wing of the Republican Party than Trump does, has also refused to push anti-LGBT causes just for the sake of political expediency. She argued that South Carolina did not need a bill similar to North Carolina’s HB 2 that would have restricted transgender people’s ability to access restrooms matching their gender identity, even though some legislators wished to push such a bill.

She was also criticized by right-wing activists like Bryan Fischer of the American Family Association for her State of the Union response acknowledging LGBT families. Fischer, for his part, accused Haley — and by extension, the Republican Party — of having “embraced sodomy-based marriage and the entire homosexual agenda.”

John Riley is the local news reporter for Metro Weekly. He can be reached at jriley@metroweekly.com
← Previous Story Woman whose Michaels tirade went viral made homophobic comments at Peet’s Coffee shop
Next Story → Twitter study reveals the most homophobic places in America