“Moby Dick” at Arena Stage (review): Catch a ride on this bewitching Pequod

Visually and aurally enchanting, this is storytelling as magical dream. You've never seen Melville quite like this. 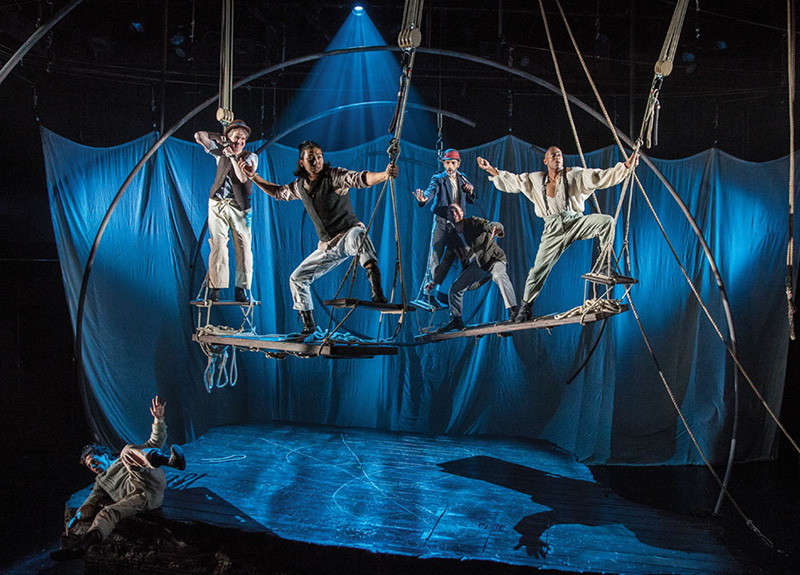 You’d be forgiven for feeling like it’s time to stick a fork in Moby Dick. With films, opera, a TV miniseries and, of course, a musical, when it comes to covering Melville’s classic, isn’t this whale tale truly done?

In the case of the Lookingglass Theatre Company’s production now at Arena Stage, the answer is a resounding no.

Visually and aurally enchanting, this is storytelling as magical dream. Put simply, you have never seen Melville quite like this.

Without giving away any of the loveliest surprises, suffice to say that, not unlike the offerings of Synetic Theater, this is very much a work of physical theater. Blended with the extraordinary eye of adapter and director David Catlin, music, sound, movement and an artful quotient of aerial acrobatics draw us into a beautifully gloomy world above and below the sea. In this telling, the watery depths are filled with mysterious life — natural, metaphorical, perhaps even supernatural.

But if there is a rich dose of melancholy and menace (as there should be with any well-told fairy tale), Catlin lightens his tincture with a few clever moments of humor and plenty of sailors’ jollity. The costumes of Sully Ratke are a powerful component of these atmospheres: moving from appropriately austere early 19th century silhouettes through an array of creative and Steampunkish riffs on the lines and looks of the day. It’s a sensibility that blends finally and fascinatingly with Catlin’s vision of Ahab’s confrontation with the whale. Think American Horror Story: Victorian Boudoir meets high concept.

All this wonderment aside, there are two caveats. The first is a slightly slow start, due to a mild lack of cohesion and a mildly incongruous Jamie Abelson as archetypal newbie, Ishmael. Starting things off in narrative form, Abelson’s job is to set the stage of this young would-be sailor naively joining a whaling crew about whom he knows nothing. But if he is clear and concise, he also presents rather like the slightly-whiny new guy in the office, not really the best entry to a piece that is all about the atmosphere. Matter aren’t helped by some accents among the incidental characters that can’t decide if they’re Irish, English or deepest Revere. Even so, Abelson — and the ensemble as a whole — soon meld into the larger story told with pitch-perfect pace and all is forgiven.

The second issue is a tougher call: Christopher Donahue’s Ahab. Had this been a bigger venue, his spasmodic pauses, athletic limping, and (random) searing madman’s leers might have delivered nicely to the nosebleed seats. In the intimate confines of Arena’s Kreeger, this Joe Cocker-meets-Ahab interpretation is more likely to deliver just the nosebleed. As interesting as it is, it’s just a bit too much of a good thing.

Still, as a piece writ large and fantastical, even this over the top performance largely works within its feverish vision, not least because there is so much to balance it. As the super-skilled Polynesian whale killer, Queequeg, Anthony Fleming III is a complete scene-stealer. A beautiful mover, his dream-dance over the sleeping Ishmael is stunningly otherworldly and the first indicator of the many treats in store in the highly visual production. Vital considering his enormous charisma, Fleming does an extraordinary job of walking the line between caricature and authenticity. His man may be “exotic” as seen through early 19th century eyes, but he is never a cliché and never naive.

Also strong is Walter Owen Briggs as Starbuck. A rather uneventful role in which Ahab’s chief mate spends most of his time bumming out over his captain’s obsession, there isn’t much to chew on. But Briggs not only looks the part of a strapping seaman, he does a good job of expressing the angst of a man who recognizes a suicide mission when he sees one. In his smaller role as Father Mapple, the versatile Briggs is memorably nuanced and charismatic, leading a powerful insight into the deeply mystical world of this tight-knit community.

But when it comes to the artistic mystery of the piece, credit must go to the trio of women who deliver so much of the atmosphere and iconography of the interpretation though song, mime, movement and dramatization. Serving as local and symbolic women as well as a host of magically metaphorical embodiments, Kasey Foster, Cordelia Dewdney and Kelley Abell move seamlessly through Catlin’s carefully choreographed and conceived story. Foster is particularly affecting as a widow, while Dewdney makes for a wonderful whale. Finally, mention must be made of Javen Ulambayar as the very credible crew-member Mungun, for his visually stunning aerial interpretation of Sylvia Hernandez-Distasi’s deeply affecting choreography.

This is all to say that if you thought there was nothing left to say about Moby Dick, catch a ride on this bewitching Pequod and be thoroughly and most wonderfully transported.

← Previous Story Spotlight on The Second Shepherd’s Play
Next Story → Fiasco Theater’s “Into the Woods” (review): A journey worth taking