Spotlight on The Second Shepherd’s Play

If the annual onslaught of holiday Muzak and mass-produced Holiday “magic” are giving you existential angst, re-set your psyche with the Folger’s The Second Shepherds’ Play (

). A so-called “mystery play” hailing from the from the darkly depths of the Middle Ages, this cozy medieval romp mixes the gentle shenanigans of cheery sheep-herders with the otherworldly (if anachronistic) announcement of the birth of Christ.

Regardless of your place on the Believer spectrum, it’s fascinating to see something this ancient brought to life, especially a play that was, without doubt, meant to be as funny as it was holy. Clearly, it wasn’t all Bergman’s Seventh Seal back in the Dark Ages day. But it’s the Folger’s inspired choice to add interludes of music and song from the period that makes it such a welcome respite from the commercialized cacophony.

Played live on stage by three quietly charismatic (and in-character) musicians, the music is at times wistful, at times contemplative, always beautiful. The actors join in at times for some rousing song with the Folger Consort’s Emily Noel offering a particularly charming and ethereal voice, especially as a magical visitor from on high.

If this is more Folger-lite when compared to the company’s often gobsmackingly imaginative productions, it is nevertheless a truly peaceful refuge from the saccharine of the season. 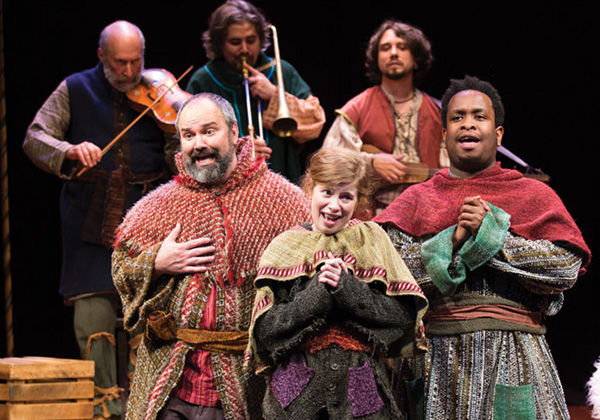 ← Previous Story Spotlight on: The DOMA Diaries
Next Story → “Moby Dick” at Arena Stage (review): Catch a ride on this bewitching Pequod