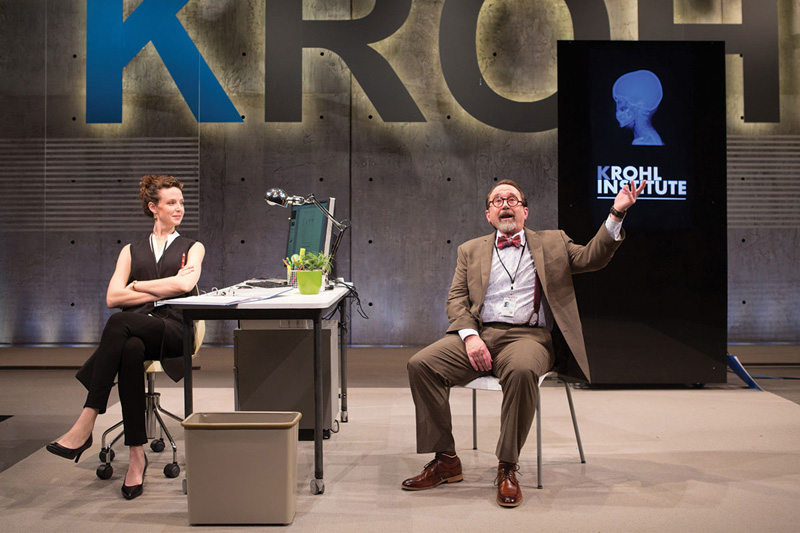 A compelling exercise in scientific and moral debate that finds time for theories about hedge funds, human behavior, even the Optogenetics of mice, Tom Stoppard’s The Hard Problem (

) just barely develops meaningful emotional stakes in its story of Hilary (Tessa Klein), a young neuropsychology researcher pursuing the nature of consciousness. Perhaps it’s only appropriate that a drama concerned with parsing what scientists refer to as “the hard problem” — that is, how to distinguish between the brain and the mind — would lean towards a certain coolness.

To be sure, profound emotions are at play, as Hilary, in line for a position at the vaunted Krohl Institute for Brain Science, struggles with deep self-doubt and insecurity, haunted by a devastating event from her past.

The action opens on Hilary mid-argument with her rakish university colleague, Spike (Kyle Cameron), as they playfully debate game theory via the Prisoner’s Dilemma. An avowed materialist, Spike argues the rational side between self-serving betrayal and altruistic devotion, while Hilary posits that relationships, past history, and feelings ultimately determine action. During the discussion, Hilary happens to be seated on her bed, and Spike happens to admit his ulterior motives in agreeing to assist her with her research. Thus, from the start, director Matt Torney’s staging serves Stoppard’s clever use of the couple to illustrate the dichotomies in question.

In Studio Theatre’s well-acted production, Klein and Cameron banter warmly as Hilary and Spike, thoroughly credible as scientists and university colleagues who become friends then lovers, in spite of, or perhaps because of, their many, thorny differences in opinion about the greater mysteries of life and death. But their relationship isn’t the story here. Hilary is hired at Krohl, soon becoming a favorite of her boss, Leo (a marvelous Martin Giles).

Leo runs the Krohl Institute’s neuropsychology division, apparently the least favored of the various science, technology and financial concerns overseen by venture capitalist Jerry Krohl (David Andrew MacDonald). Leo will challenge Hilary to deliver “something sexy” for their division, some earthshaking research to advance their field and arrest Jerry’s attention from his funds and investments, which are suddenly flailing as the impending financial crisis mounts. 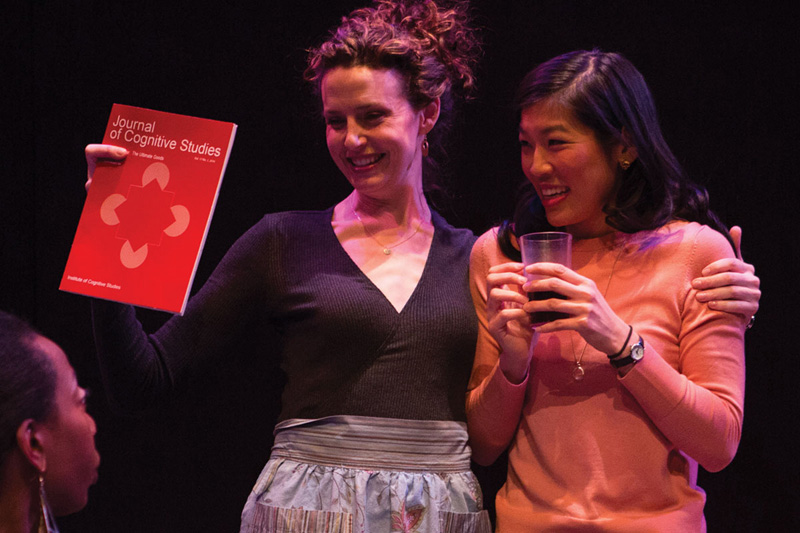 Oh right — it’s the early to mid-aughts here in Hilary’s world. Although one can understand Stoppard’s intention in combining what he originally conceived as two separate plays — one about the so-called hard problem, the other about the financial crisis — ultimately, the juxtaposition adds an undercurrent of anger and topicality, but not much else. The notion that financial markets, as sensitive and volatile as any living thing, exhibit no biases or preferences, certainly fits here. Markets don’t respond to feeling, they just are. But yet again, markets aren’t the story.

The play is most gripping in its portrayal of the intricacies and intrigues of conducting and publishing research in an environment where good science can suffer due to the sort of petty jealousies, overreaching ambitions and flat-out duplicitousness that fuel seasons and seasons of royal court dramas.

However, there are no heads on the actual chopping block, no real danger lurking in the shadows. Yes, Hilary’s painful past rears its head bringing her more doubt and sorrow, and Klein’s performance enacting the depth of that sorrow feels raw and real, as does her blossoming relationship with a new research assistant, Bo (Nancy Sun, in a well-modulated turn). So why do the proceedings lack any prevailing sense that, whatever happens, Hilary will wind up any less okay than how she started? At least audiences will have the hard problem to consider on their way out the door.

The Hard Problem at Studio Theatre

André Hereford covers arts and entertainment for Metro Weekly. He can be reached at ahereford@metroweekly.com. Follow him on Twitter at @here4andre.
← Previous Story Theatre Prometheus is putting a lesbian love story at the heart of “Cymbeline”
Next Story → Arena Stage’s “Roe” focuses on the lives of the women in Roe v. Wade